67’s get nothing for zero 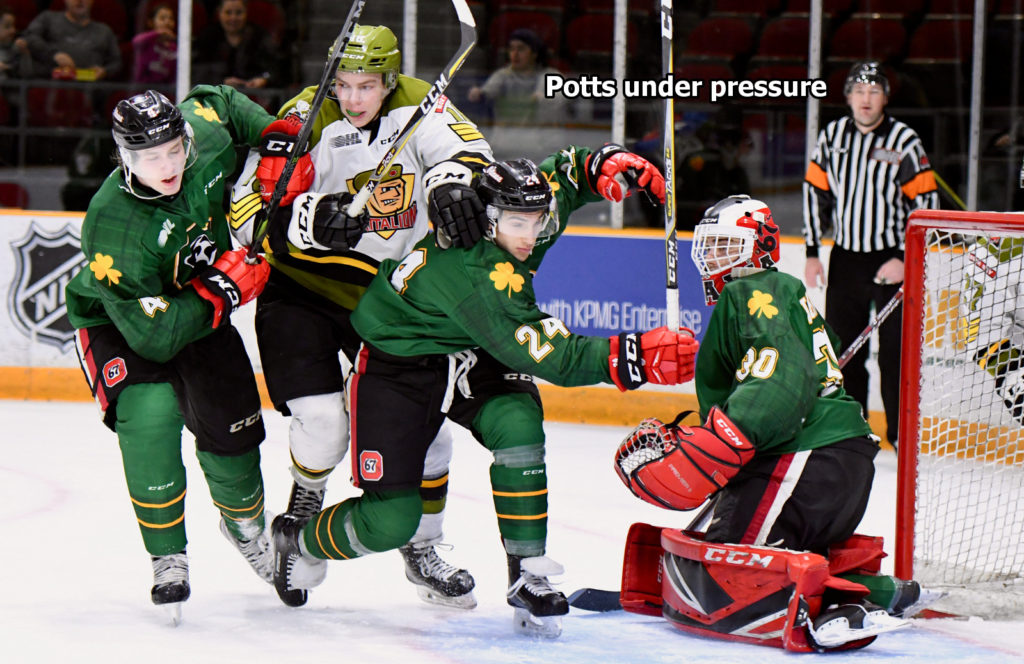 OTTAWA — Tye Felhaber scored two goals and added an assist and goaltender Olivier Tremblay made 26 saves as the Ottawa 67’s blanked the North Bay Battalion 5-0 Sunday in the Ontario Hockey League regular-season finale for both teams, but it all went for naught for the 67’s.

Sasha Chmelevski contributed one goal and one assist and Carter Robertson and Jacob Cascagnette also scored for Ottawa, which hoped to surpass the Mississauga Steelheads for seventh place in the Eastern Conference. But the Steelheads downed the visiting Kingston Frontenacs 3-1 and won a tie at 69 points on the basis of more wins, 33-30.

Ottawa, which wore St. Patrick’s Day-themed sweaters and socks a day late, finished fourth in the East Division and eighth in the conference with a won-lost-extended record of 30-29-9 and will face the first-place Hamilton Bulldogs in the opening playoff round while Mississauga gets the second-place Barrie Colts.

Tremblay earned his third shutout of the season before 4,597 at TD Place, while the Troops were blanked for the third time, all on the road.

Chmelevski ripped a wrister from the inner edge of the left-wing circle high over Propp’s glove for a team-leading 35th goal of the season at 10:19 of the first period, and Felhaber struck during a two-man advantage at 19:56, snapping the puck low through a screen. Justin Brazeau was assessed a goaltender interference penalty and Jesse Saban an unsportsmanlike conduct call and a misconduct, both at 18:44.

The Battalion, outshot 10-8 in the period, had several chances in the second half of the frame. Matthew Struthers put the rebound of a Brazeau effort past Tremblay at 8:57, but referee Sean Reid waved off the play, ruling that Brazeau had interfered with the goaltender. Tremblay produced two good stops on Jake Henderson and denied Rhys Forhan and Kyle Potts in close.

Defenceman Robertson scored at 14:45 of the second period when his lob from the left point eluded Propp, who was screened by Mitchell Hoelscher.

Propp faced 15 shots in the period, including good opportunities for Hoelscher, Merrick Rippon, Travis Barron, Kevin Bahl and Oliver True. Felhaber hit the crossbar from the deep slot in the 13th minute. The Troops, who recorded 11 shots, had their best chance late in the period, buzzing around the offensive zone with Brazeau testing Tremblay from the right circle.

Felhaber converted on the power play at 6:18 of the third period, drilling a cross-ice pass from Chmelevski over Sime’s right shoulder for a 31st goal, and Cascagnette connected at 15:09 when he drove to the net to bury a back pass from Shaw Boomhower.

North Bay, which got its only power play late in the period, registered seven shots in the frame. Tremblay faced early threats from Henderson, Potts and Brad Chenier.

The Battalion finished a season on the road for the second time in its 20-year history. The Troops, then based in Brampton, concluded the 1999-00 campaign with a 3-3 tie against the Kitchener Rangers.

BATTALION BULLETS: The Battalion went 1-2-1 in the season series. The Troops have an all-time won-lost-tied record of 40-31-1 against Ottawa … Overager Riley Bruce played his 269th game, tying Luke Lynes for sixth place on the Battalion’s all-time list … Brazeau played a 200th career game … Ottawa also had a would-be goal disallowed, as Propp made no effort to stop a late shot on a play at 13:54 of the first period that was clearly offside … North Bay went 3-4-1 in March … While the Battalion was 0-for-1 on the power play, Ottawa went 2-for-4 … Forhan and Sam Bitten fought in the middle period, with each receiving a major … Opening lines saw Struthers centring left winger Luke Burghardt and right winger Brazeau, Potts pivoting left winger Adam McMaster and right winger Henderson and Luke Moncada centring left winger Chenier and right winger Brandon Coe. Patrick Brown centred Andy Baker on left wing and Forhan on right wing … The Battalion was without Travis Mailhot, Daniel Walker and Kurtis Evans … Brown turns 18 on Wednesday … With coach Stan Butler having scouted the OHL Cup minor midget tournament at Toronto, assistants Adam Dennis and Scott Wray ran the Battalion bench for a third straight game … Ottawa’s Nikita Okhotyuk completed an eight-game suspension resulting from a head-checking major in a 4-2 win March 1 at North Bay … Mike Hamilton was the other referee.