A breakout by the break 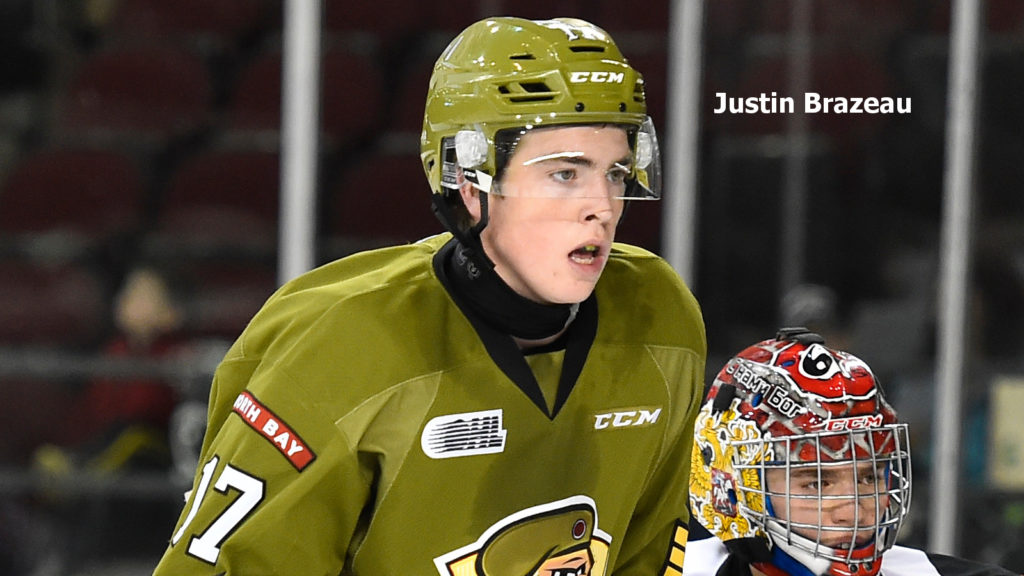 NORTH BAY, Ont. — Justin Brazeau was the breakout star of the first half of the North Bay Battalion’s season as the Ontario Hockey League club soldiered through a somewhat daunting early schedule.

Right winger Brazeau registered 24 goals and earned 13 assists for 37 points in 34 games to pace Battalion scoring at the OHL’s Christmas break, which ends next Thursday night with all 20 teams in action, including North Bay playing host to the Niagara IceDogs.

Brazeau, who’s surpassed the 22 goals he scored last season and has tied his points total from 2016-17, is on pace for 48 goals, which would be the second-highest total in franchise history, after centre Mike Amadio’s 50 in 2015-16.

Brazeau, whose goals total is third in the OHL, has 10 power-play goals, putting him in a five-way tie atop the league.

The 19-year-old New Liskeard, Ont., native was recognized as the OHL’s Player of the Week for the period ended Dec. 10, becoming the fifth member of the Battalion to receive the honour since the club moved to North Bay from Brampton in 2013.

Left winger Luke Burghardt, an offseason acquisition from the Guelph Storm, has 13 goals and 20 assists for 33 points, while Cam Dineen has scored 10 goals and added 21 assists for 31 points and fellow defenceman Adam Thilander has two goals and 17 assists for 19 points. All have played the full complement of 34 games.

Overage centre Brett McKenzie, who opened the season with the American Hockey League’s Utica Comets and missed another two games with a sore groin, has eight goals and 10 assists for 18 points in 28 games. He led the North Bay offence last season with 29 goals and 38 assists for 67 points in as many games.

Right winger Brandon Coe, a first-round pick in the OHL Priority Selection last April, leads Battalion rookies with nine points, including three goals, in 29 games. Three of his points, all assists, have come in the last three games, including a two-assist performance in a 6-3 victory at Niagara last Friday night for his first multi-point game in the OHL.

Goaltender Christian Propp has a won-lost-extended record of 3-2-1 in six games since being acquired Oct. 22 from the Owen Sound Attack with a 10th-round pick in 2020 in exchange for defenceman Brady Lyle and a seventh-rounder in 2020. With the Troops, Propp has a 2.92 goals-against average and a .906 save percentage, although league statistics require correction to reflect the latter.

Crease partner Julian Sime is 6-11-3 with a 3.41 GAA and an .894 save percentage in 23 appearances. Propp and Sime shared the only Battalion shutout of the first half, a 4-0 blanking of the visiting Windsor Spitfires on Oct. 26.

North Bay was shut out for the only time last Saturday night when the Erie Otters prevailed 3-0 in the Troops’ last road game against a Western Conference opponent. Six of 11 home dates against the opposite conference come in the second half, with visits to Memorial Gardens by the London Knights, Owen Sound, the Saginaw Spirit, Erie, Guelph and the Flint Firebirds.

The Battalion, 12-18-4 for 28 points, third in the Central Division, is four points behind its pace of last season, when the club was 15-17-2 at the midpoint of the schedule on the way to a 24-38-6 finish that generated 54 points and left it out of the playoffs for just the third time in 19 years.

Eighteen of the last 34 games are at home, where the Battalion is 7-6-3, and 16 games are left on the road, where the Troops are 5-12-1. But the team survived a stretch of 16 games from Oct. 26 to Dec. 2 in which 12 dates were against the opposite conference, going 5-9-2 in the span and 3-3-0 since. The remaining schedule features 28 games within the Eastern Conference, giving the Battalion an opportunity to improve its playoff positioning.

Each of North Bay’s power-play and penalty-killing performances is ranked 10th in the league.

The Battalion has scored 32 goals in 150 numerical-advantage situations for a proficiency of 21.3 percent. Owen Sound leads at 27.0. The Troops’ penalty killers have allowed 28 goals in 141 shorthanded occasions for a kill rate of 80.1 percent. The Sarnia Sting is best at 89.0.

The Battalion is 14th in the league in penalty minutes, averaging 9.9 per game. The Barrie Colts lead the penalty parade at 14.2 minutes.