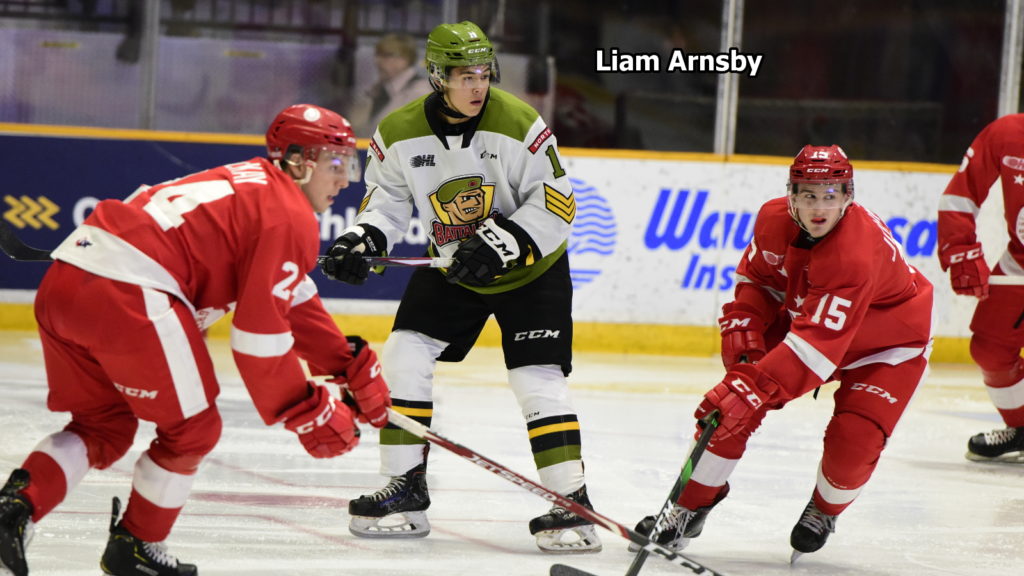 NORTH BAY,  Ont. — Liam Arnsby of the North Bay Battalion is one of 24 Ontario Hockey League players who are to represent Canada at the World Under-17 Hockey Challenge, Hockey Canada has announced.

A total of 66 skaters and goaltenders will be divided into three teams – Canada Red, Canada White and Canada Black – to compete against the Czech Republic, Finland, Russia, Sweden and the United States from Nov. 2-9 at the Western Hockey League centres of Medicine Hat and Swift Current.

Arnsby, the Battalion’s first-round pick in the OHL Priority Selection last April from the Don Mills Flyers minor midgets, has one goal and one assist for two points in nine games. The five-foot-10, 172-pound resident of Ajax, Ont., turns 16 on Nov. 20.

“It’s awesome, all the great guys who have gone through there, and just the experience to go out there and play,” Arnsby, who has skated at centre and right wing, said Wednesday. “It’s going to be amazing.”

Stan Butler, director of hockey operations and head coach, said, “We’re really happy that he’s going to get that opportunity.”

The OHLers consist of 18 forwards, five defencemen and one goaltender, in Corbeil resident Benjamin Gaudreau, who was the first-round choice of the Sarnia Sting in April from the North Bay Trappers midgets. Eighteen of the players were chosen in the first round of the 2019 OHL Priority Selection.

More than 1,800 National Hockey League draft picks have suited up since the tournament, previously known as the Quebec Esso Cup, first was played in 1986, including 14 first-overall picks since 2001. Among them are Alexander Ovechkin in 2004, Patrick Kane in 2007, John Tavares in 2009, Taylor Hall in 2010, Nathan MacKinnon in 2013, Connor McDavid in 2015, Auston Matthews in 2016 and Jack Hughes this year.