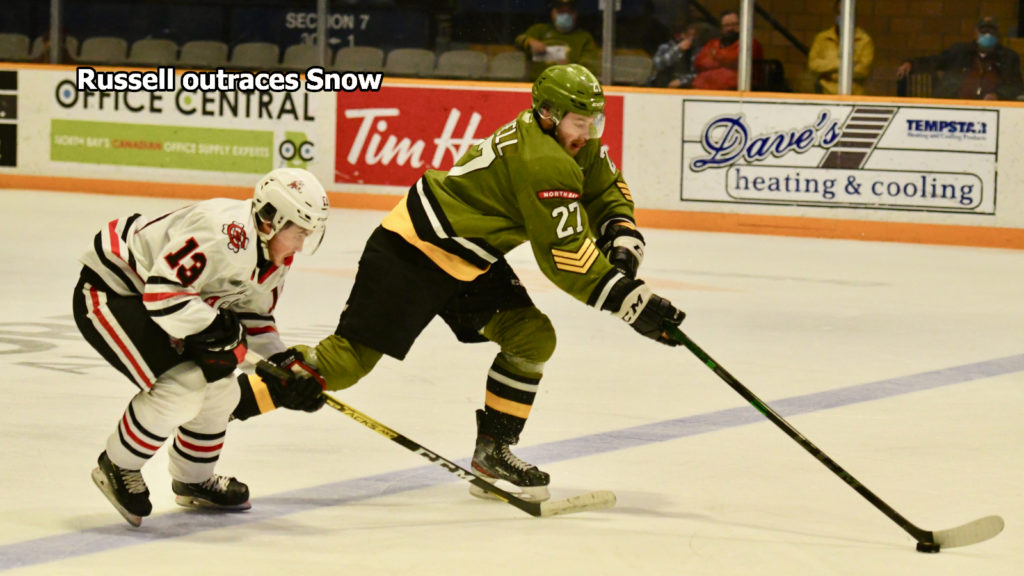 NORTH BAY, Ont. — Brandon Coe and Matvey Petrov each scored two goals and assisted on another to pace the North Bay Battalion to a 7-3 victory Sunday over the Niagara IceDogs, pushing the Troops’ Ontario Hockey League winning streak to four games.

Josh Currie scored two goals and Michael Podolioukh had one goal and an assist as North Bay, which led 4-0 after the first period, moved its won-lost-extended record to 12-6-1 for 25 points, first in the Central Division and Eastern Conference.

Goaltender Joe Vrbetic, who made 23 saves, saw a shutout streak end at 203 minutes, four seconds, when Liam Van Loon scored at 18:18 of the second period before a crowd of 2,179.

In his previous two games, both at home, Vrbetic blanked the Sudbury Wolves 4-0 on Nov. 14 and shut out the Ottawa 67’s 3-0 last Thursday night. Before that, the last goal he allowed came at 14 seconds of the second period of a 3-2 loss via shootout Nov. 12 at Sudbury. Goals allowed in shootouts don’t count against a goaltender’s total.

Coe, with nine goals and a league-leading 24 assists for 33 points in 19 games, is one point behind leader Tucker Robertson of the Peterborough Petes in the OHL scoring race.

Isaac Enright and Ryan Struthers scored the other goals for Niagara, which suffered a third straight loss and is 5-12-0 for 10 points, last in the division and conference. Rookie goaltender Joseph Costanzo, making his second OHL start in anticipation of heading off to the Capital City Challenge under-17 tournament at Ottawa, faced 34 shots.

“I thought we kind of fought our game, to be honest, and our structure a little bit as the game wore on, but we always talk about how hard it is to win in this league, and a win is a win,” said Battalion coach Ryan Oulahen.

Petrov struck first at 6:49 of the opening period, with Kyle Jackson, who had two assists, winning a faceoff cleanly and drawing the puck back to Petrov on the inner edge of the circle, from where he ripped the rubber past Costanzo.

Podolioukh connected at 10:06, chopping home the puck off a pass from Nic Sima. It was Sima’s first OHL point, with Tnias Mathurin getting the other assist, his first of two.

Coe scored 1:05 later, driving around Rodwin Dionicio on the right side and cashing a backhander from the lip of the crease.

Currie got open on the left side and beat Costanzo, who may have got a piece of the puck, with a high shot at 18:26. Owen Outwater drew the lone assist.

Coe shoveled home a cross-crease pass from Petrov during a two-man advantage at 5:16 of the middle period, and Currie jammed home the rebound of a Podolioukh effort at 17:26 for a seventh goal on the season. Alexander Lukin had the second assist for his first OHL point.

Van Loon converted on an odd-man rush to break Vrbetic’s shutout string before the period ended, and Petrov followed with his team-leading 15th goal at 5:50 of the final frame when he redirected a Coe pass at the net front.

Defenceman Enright replied at 8:23 after a turnover, and Struthers tucked a backhander under Vrbetic at 19:28.

The Battalion opens a three-game eastern swing with a visit to Peterborough at 7:05 p.m. Thursday. The game can be seen live in North Bay on YourTV Channels 12 and 700.

BATTALION BULLETS: Oulahen has a 24-24-5 record as coach of the Battalion. Succeeding Stan Butler, Oulahen was named to the post on an interim basis on Dec. 10, 2019, and in full on March 24, 2020 … The first of eight games against Niagara, two more than customary, means that the Battalion now has faced each of the 10 opponents it plays this season at least once … The Battalion wore green at home because Niagara had white apparel for a promotion by the host Barrie Colts, who defeated the IceDogs 6-2 Saturday night … Jackson has a career-high eight-game points streak in which he has eight goals and as many assists for 16 points … Coe has an eight-game assists streak in which he has earned 14 assists. In 207 career games, Coe has 61 goals and 89 assists for 150 points, tied with John Hughes and Kamil Kreps for 17th place in franchise history … Dom DiVincentiis, in net for a 4-2 road win Friday night over the Oshawa Generals, backed up Vrbetic … North Bay went 1-for-5 on the power play. Niagara was 0-for-3 … The Battalion scratched Cam Gauvreau and Anthony Romani … Among the Niagara scratches was goaltender Tucker Tynan, who has played 13 of 17 games … The IceDogs acquired overager Van Loon in a trade Thursday with the Hamilton Bulldogs … First Responder Appreciation Day saw a ceremonial faceoff involving North Bay police chief Scott Tod and other dignitaries.