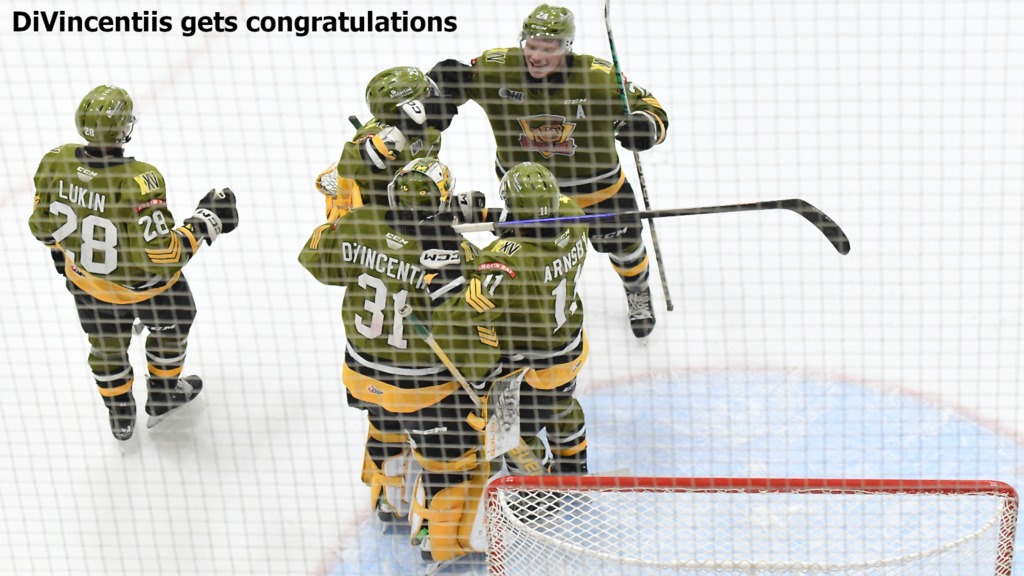 DiVincentiis, playing a second straight game after sitting out three while in concussion protocol, helped North Bay to a third consecutive win, improving its won-lost-extended record to 18-8-0 for 36 points atop the Central Division. The Battalion, which defeated the Kingston Frontenacs 4-2 Friday night, completed a two-game weekend road trip and a run of five road games in which it went 3-2-0.

The Battalion, which led 1-0 at the first and second intermissions, doubled its lead when Jackson struck on the power play at 2:31 of the third period. Josh Bloom and Petrov got the puck to Jackson off a left-wing faceoff and, after controlling the disc, Jackson beat Simpson for a team-leading 16th goal on the season.

Jackson has a six-game points streak in which he has six goals and four assists for 10 points.

Wakely, who took a centring backhanded back pass from Nikita Tarasevich, hammered home his 15th goal off a rush at 11:07 to complete the scoring and set the stage for the Battalion’s effort to secure the shutout for DiVincentiis, who played his 44th career game over two seasons.

Paul Christopoulos was assessed a holding penalty 13 seconds after Wakely’s goal, but that was offset when J.R. Avon was penalized for playing with a broken stick after a further eight seconds.

Two sets of coincidental minors followed before Peterborough’s Konnor Smith went off for crosschecking at 16:23. The Petes pulled Simpson for a sixth skater and threatened several times in the closing minutes, including when Chase Stillman jammed at the puck in the crease, before the clock ran out.

Defenceman Kennedy, who went off for a weak slashing penalty at 1:48 of the first period, gained revenge when he intercepted a clearing attempt and wristed the puck through traffic from the right point for his second goal, an unassisted effort, at 5:04. Given DiVincentiis’s showing, it proved all the Troops needed.

Smith was denied a tying goal at 14:29 when video review resulted in a ruling of goaltender interference by Jax Dubois on DiVincentiis, who made 14 stops in the period, including a left-pad save against Avon, who crashed the net in the final minute. North Bay had 10 shots.

DiVincentiis snagged a drive by Jack Van Volsen from above the left circle at 9:30 of the middle period before Simpson countered with a couple of solid saves against Owen Van Steensel, first on a backhander in tight after he broke in from the blue line at 10:53 and again on a quick-developing chance in the 16th minute.

The Battalion plays host to the Soo Greyhounds at 7 p.m. Thursday, when The Brick presents the Teddy Bear Toss.

BATTALION BULLETS: It was the third of four meetings, after the Battalion posted a pair of 3-1 wins, Oct. 6 at Peterborough and Oct. 13 at home. The last game is March 16 at Memorial Gardens … DiVincentiis, a sixth-round pick in the 2020 OHL Priority Selection, has a league-leading 2.49 goals-against average, a .906 save percentage and a record of 13-4-0. Rookie Charlie Robertson posted the Troops’ first shutout of the season in a 5-0 home-ice win Nov. 24 over the Ottawa 67’s … The Battalion’s Ty Nelson saw the end of an eight-game points streak in which he had two goals and 13 assists for 15 points, while Justin Ertel had a six-game points streak ended. He had two goals and five assists for seven points in the span … Bloom, on a four-game points streak during which he has five goals and three assists for eight points, has six goals and seven assists for 13 points in nine games since a Nov. 16 trade from the Saginaw Spirit … North Bay went 1-for-3 on the power play. Peterborough was 0-for-4 … The Battalion was without Tnias Mathurin, Avery Winslow, Kyle McDonald and Brett Bouchard … Avon saw the end of a 10-game points streak in which he had five goals and eight assists for 13 points … The referees were Blake Beer and Adam Forbes, the latter a Western Hockey League official attending an on-ice officials’ seminar coordinated with the National Hockey League.