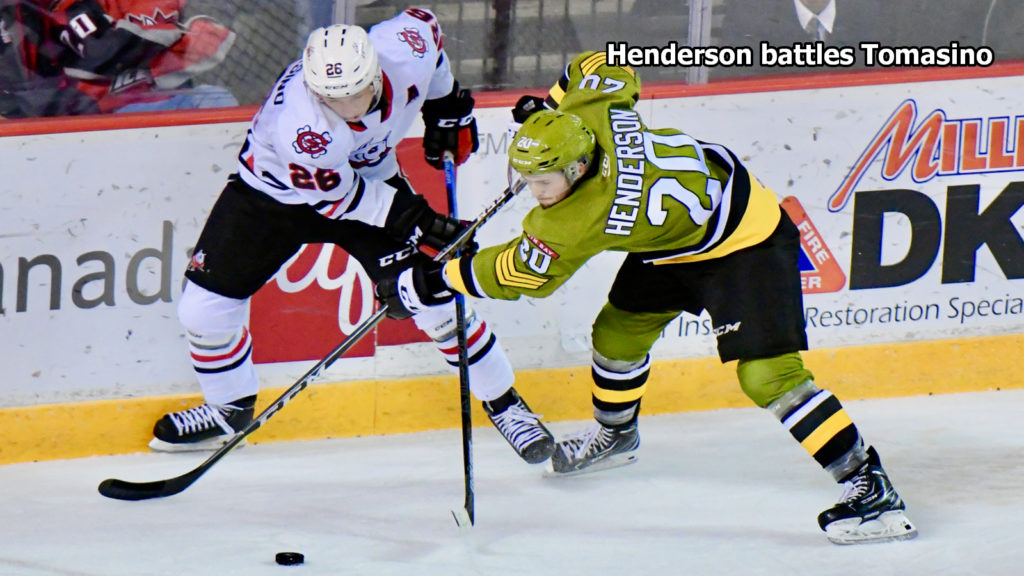 The Troops, who lost 5-4 at home Thursday night to the unbeaten Oshawa Generals, play host to the Sault Ste. Marie Greyhounds at 2 p.m. Monday in the traditional Thanksgiving Day game.

“It’s nice to get rewarded for our hard work,” said Battalion captain Brad Chenier. “In our last couple of games we fell just shy, so it feels good to get a big win here. In the Oshawa game we battled really hard to the end, and tonight we played a full 60 (minutes) and got the result we wanted.”

Struthers opened the scoring at 1:09 of the first period, swatting the rebound of a Paul Christopoulos drive from the blue line past Sbraglia. James Mayotte also assisted on Struthers’s second goal of the season.

Niagara responded at 4:53 as Tomasino finished a three-way passing play with Kyen Sopa and Jackson Doherty, but Russell connected on the power play at 7:29, his drive from the left-wing circle trickling across the goal line. Struthers and Chenier drew assists.

The teams were skating four-on-four when Moncada stripped Elijah Roberts of the puck at the Battalion blue line, broke in alone on Sbraglia and beat the goaltender between the pads for a 3-1 lead at 19:12.

North Bay erupted for four second-period goals on 13 shots, sparked by penalty killer Moncada at 4:36. Harrison Caines stole the puck from Roberts at the Battalion blue line and broke away with Moncada, who converted off the right wing for his fourth goal. His three shorthanded tallies lead the league.

Niagara replied on the power play at 5:39 when Uberti redirected Drew Hunter’s shot from the left point. A lengthy conference between referee Josh Schein and the video goal judge saw the goal stand.

Primeau struck on the power play at 10:02, driving to the net to bury a feed from Brandon Coe. Struthers had the second assist.

Defenceman Henderson hammered a Josh Currie rebound over the right shoulder of a sliding Sbraglia from the left circle at 10:24. The goal was the second of Henderson’s career, the first having come last Nov. 10 in a 4-3 win over the visiting IceDogs.

Primeau finished off a two-on-one rush with Russell at 16:22 for a fourth goal on the season, and Russell intercepted a Mason Howard pass in Battalion territory and took off down the right wing before sliding the puck between Sbraglia’s pads at 3:53 of the third period. It was Russell’s fourth goal.

Niagara outshot the visitors 17-9 in the frame but failed to generate a scoring chance, even with a two-man advantage lasting 1:13.

BATTALION BULLETS: The Battalion has an all-time won-lost-tied record against the IceDogs of 72-60-5. The franchise played out of Mississauga for nine seasons before relocating to St. Catharines in 2007 … North Bay has a won-lost-extended record of 1-3-0 on the road. Niagara is 2-2-1 at home … Chenier has a seven-game points streak during which he has two goals and six assists for eight points and a five-game assists streak in which he has five assists … Rookie Vrbetic, who made his fifth start in six appearances, is 2-3-0 with a goals-against average of 3.58 and a save percentage of .906 … Sbraglia returned to play after completing a five-game suspension handed down in light of a match penalty he incurred for roughing in a 4-3 overtime loss to Oshawa at home Sept. 26 … Opening lines featured Struthers centring left winger Chenier and right winger Coe, Primeau pivoting left winger Kyle Jackson and right winger Russell and Moncada centring left winger Caines and Liam Arnsby on right wing. Cameron Peters centred left winger Currie and right winger Alex Christopoulos … North Bay was without Simon Rose, Niki Korpialho, Nick King and David Campbell … The Battalion went 2-for-5 on the power play. Niagara was 1-for-5 … Tomasino has a four-game points streak in which he has five goals and five assists for 10 points … Sean Reid was the other referee.