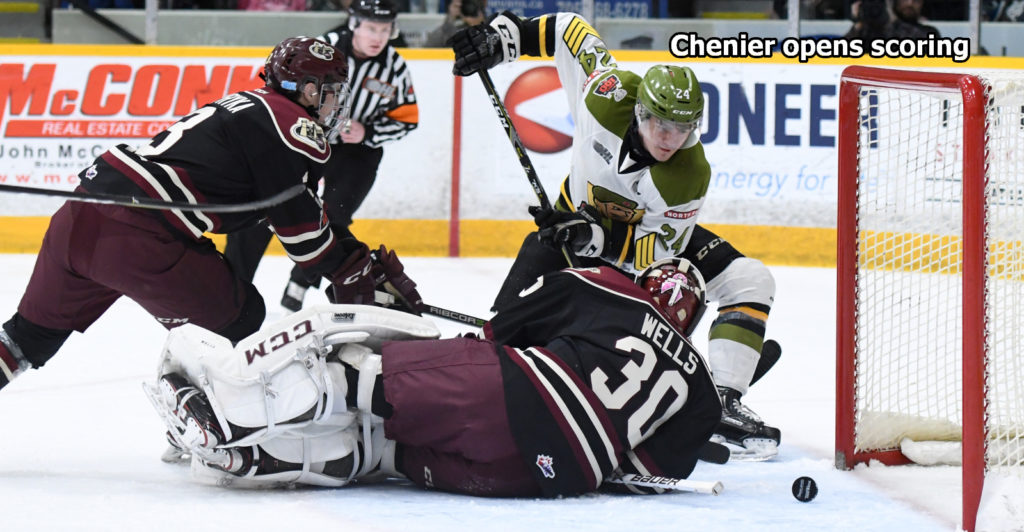 But results elsewhere left the Battalion, which jumped to 3-0 and 5-0 period leads, no wiser about its Eastern Conference playoff positioning. The Troops still can finish anywhere from fifth to eighth in the conference.

Luke Burghardt had one goal and one assist and Brad Chenier and Jake Henderson the other goals for North Bay, which has a won-lost-extended record of 30-26-10 for 70 points, third in the Central Division and sixth in the conference. Goaltender Christian Propp shone in a 31-save performance in opening a three-game schedule-ending road trip.

Logan DeNoble scored for Peterborough, which was eliminated from postseason contention last week. Goaltender Dylan Wells faced 25 shots for the Petes, who are 22-38-6 for 50 points, fifth in the East Division and ninth in the conference after an eighth consecutive loss.

The Battalion remained three points ahead of the Ottawa 67’s after they rallied late to defeat the host Barrie Colts 5-4 in overtime. The Niagara IceDogs downed the visiting Hamilton Bulldogs 3-2 in overtime, with Hamilton clinching first place in the conference ahead of Barrie. The Troops still can face any of Hamilton, Barrie, the Kingston Frontenacs and Niagara in the first playoff round.

After meeting Kingston at 7 p.m. Friday, the Battalion is at Ottawa on Sunday, the last day of the regular season.

Propp lost his shutout bid on the final goal of the game, with the man advantage at 13:04 of the third period, after interim coach Andrew Verner’s disorganized and undisciplined Petes started benefiting from the last three power plays. Rhys Forhan was off for a weak tripping call when DeNoble scored his team-leading 30th goal of the season.

Chenier opened the scoring 7:07 into the game, going to the left side of the net and jamming the puck behind Wells for a 17th goal. Braden Henderson and Patrick Brown drew assists.

Jake Henderson connected at 16:51 of the frame, taking a backhanded pass off the end boards from Adam McMaster and snapping the puck home from the left-wing circle. Kyle Potts had the other assist on Henderson’s 12th goal and his sixth since joining the Troops in a trade Jan. 9 from the Kitchener Rangers.

Struthers struck at 18:52, completing a slick passing play. Burghardt fed the puck from deep on the left wing to Justin Brazeau below the left circle, and he put it to Struthers driving to the net from the right side.

With the teams skating four a side, Struthers was credited with another goal at 4:43 of the second period when Peterborough’s Alex Black passed the puck into the goalmouth and saw it deflect off Nikita Korostelev’s right skate into his own net. It was Struthers’s 22nd goal and 13th since a Jan. 3 trade from the Owen Sound Attack.

Burghardt collected his 28th goal at 14:24, taking a pass from Struthers and cutting across the crease to backhand the puck past Wells at the right post.

Propp, who was bowled over by Korostelev while freezing the puck midway in the first period, made at least two stellar saves in the second, sprawling to knock away DeNoble’s shot with the catching glove in the eighth minute and snagging a Korostelev blast on a rush off the left wing at 10:25.

The game at Kingston can be seen live in North Bay on YourTV Channels 12 and 700 and heard on Country 600 CKAT.

BATTALION BULLETS: The Battalion, which went 2-1-1 in the teams’ season series, has an all-time won-lost-tied record of 41-29-2 against Peterborough … With coach Stan Butler scouting the OHL Cup minor midget tournament at Toronto, assistants Adam Dennis and Scott Wray ran the Battalion bench … The announcement of the last minute of play in the third period elicited at least one loud cheer from the crowd of 3,148 at the Peterborough Memorial Centre … The Petes haven’t garnered a point since a 3-1 home-ice win over Kingston on Feb. 22. Peterborough has been outscored 44-23 since that game … The Battalion went 0-for-2 on the power play. Peterborough was 1-for-4 … Opening lines featured Struthers centring left winger Burghardt and right winger Brazeau, Potts pivoting left winger McMaster and right winger Henderson and Brown centring left winger Chenier and right winger Brandon Coe. Centre Forhan and right winger Andy Baker had various linemates … The Battalion, which dressed seven defencemen, scratched Daniel Walker, Kurtis Evans and Luke Moncada, who had strep throat … Battalion rearguard Simon Rose saw some duty at left wing … Among the missing for Peterborough, which dressed 17 skaters, one below the limit, were Matthew Timms, Zach Gallant and Nick Isaacson … The referees were Quincy Evans and Pat Myers.