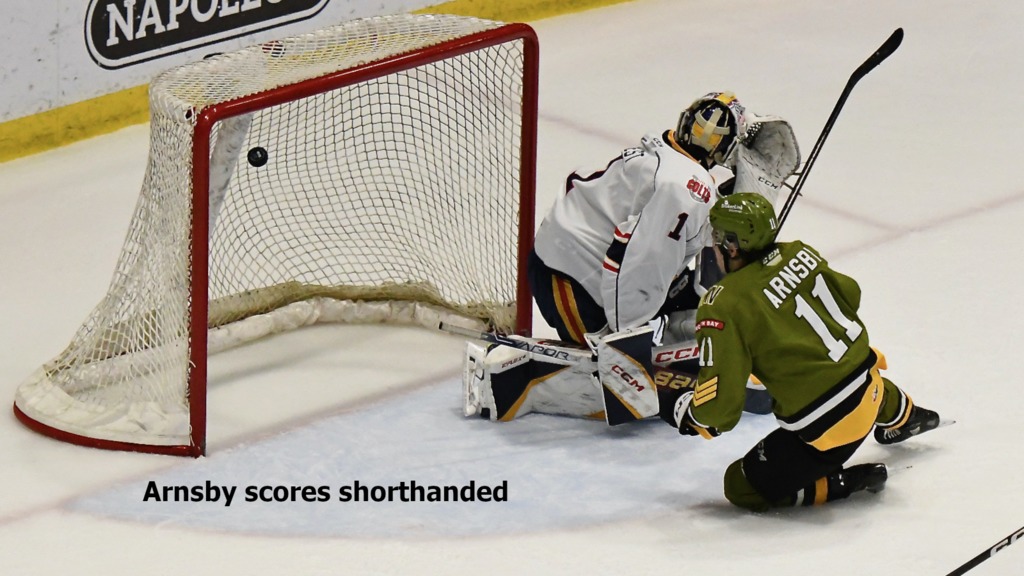 Liam Arnsby had one goal and two assists and Anthony Romani and Justin Ertel one goal and one assist apiece, while Ty Nelson and Matvey Petrov also scored for North Bay, which sports a won-lost-extended record of 12-4-0 for 24 points atop the Central Division.

Goaltender Dom DiVincentiis made 26 saves before 3,597 at the Sadlon Arena.

The Battalion’s last loss was a 6-3 setback Oct. 27 to the host Windsor Spitfires. Five of the wins in the league-best streak have come on the road, where the Troops are 8-3-0 on the season.

Ethan Cardwell scored both goals for Barrie, 7-5-3 for 17 points, third in the division. Starting goaltender Anson Thornton gave up three goals on five shots before being relieved by Ben West, who allowed four goals on 26 shots.

Nelson struck first 43 seconds into the opening period, ripping the puck from high on the left-wing boards off a back pass on a rush. Kyle McDonald, who saw the end of a six-game goals streak, and Arnsby assisted on defenceman Nelson’s sixth goal of the season.

Petrov scored his team-leading ninth goal from a bad angle to Thornton’s right at 6:27 after Wakely charged across the crease with the puck off the right wing. It appeared Petrov’s shot glanced off the goaltender as he scrambled to regain position. Nikita Tarasevich drew the second assist.

Romani ended Thornton’s night with what proved to be the winner at 13:20, stepping out of the right corner and backhanding the puck home. Assisted by Ertel, it was Romani’s fourth goal.

Battalion defenceman Alexander Lukin was cut in the face late in the frame, ultimately receiving stitches, and DiVincentiis, with Barrie applying sustained pressure, robbed Jacob Frasca directly in front in the last minute.

Arnsby scored over West’s glove on a shorthanded breakaway at 17:12 of the second period, 11 seconds after the Troops were handed a bench minor for too many men. Unassisted, it was Arnsby’s fourth goal.

After prolonged Battalion forechecking on the end boards, Ertel took a pass from Nic Sima in the left corner and one-timed the puck past West from the circle at 19:38. Kyle Jackson had the other assist.

Arnsby missed cashing a Sima rebound in the 12th minute, and DiVincentiis gloved a Carter Lowe shot at close range at 14:04, but Cardwell scored his pair 2:56 apart starting at 3:35 of the final period to pull the hosts within 5-2.

Wakely replied with a one-timed blast on the power play at 9:03 and repeated the feat at 14:21 after Wyatt Kennedy kept the puck in the zone at the right point and got the rubber to Romani for the relay.

BATTALION BULLETS: The game was the second of six between the divisional rivals, after the Battalion won 5-4 on Arnsby’s overtime goal at home Oct. 23. The next meeting is scheduled Dec. 17 at Barrie … Petrov has a 13-game points streak, the OHL’s longest this season, in which he has seven goals and 10 assists for 17 points … Wakely has a six-game points streak during which he has six goals and as many assists for 12 points … Arnsby has a six-game points streak in which he has two goals and seven assists for nine points … The Battalion went 1-for-4 on the power play. Barrie was 0-for-2 … The Battalion, which dressed 11 forwards and seven defencemen, was without Tnias Mathurin, Avery Winslow, Michael Podolioukh, Ethan Procyszyn and Brett Bouchard … Rearguard Tyson Rismond was recalled from the junior A Powassan Voodoos of the Northern Ontario Junior Hockey League, making his second appearance with the Troops. He was a fourth-round pick in the OHL Priority Selection last April from the Sudbury Nickel Capitals U16s … Among the missing for Barrie were Grayson Tiller, Ian Lemieux and Cole Beaudoin … A first-round pick, 10th overall, in the 2022 Priority Selection, Beaudoin was with Canada Black, one of three Canadian entries in the World Under-17 Hockey Challenge at Langley and Delta, B.C. … Ryan Hutchison and Drew Jackson were the referees.