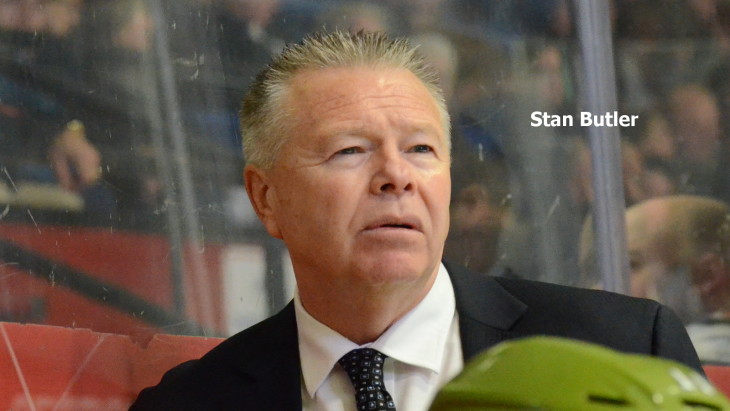 NORTH BAY, Ont. — The Flint Firebirds visit the North Bay Battalion at 7 p.m. Thursday, with the Troops set to wear North Bay Centennials uniforms in the fifth annual commemoration of the club that represented the Gateway of the North in the Ontario Hockey League from 1982 to 2002.

“I don’t think you ever want to forget what was a big part of the city of North Bay’s hockey history,” Stan Butler, who coached the Battalion through its first 15 seasons in Brampton, and the Oshawa Generals for two years before that, said Wednesday.

“Having coached in Brampton against them, and in Oshawa as well, it was always a storied franchise, and it’s always great to pay tribute to it.”

The Battalion, with a won-lost-extended record of 23-21-7 for 53 points, is third in the Central Division and tied with Oshawa for fifth place in the Eastern Conference. The Troops are 10-2-1 in their last 13 games, inserting themselves into the thick of the playoff picture with a quarter of the schedule left.

“We’ve been a little inconsistent the last couple of games, but for the most part we’ve played pretty well the last 10 or 12 games, and hopefully we continue that to the end of the season,” said Butler, whose charges lost 3-2 in overtime Sunday to the visiting Guelph Storm after rallying for a 5-3 road win Friday night over the Mississauga Steelheads, erasing a 3-0 deficit.

North Bay has fought from behind to wins or an extended loss eight times in the 13-game stretch, often in thrilling fashion in the final minutes.

“Obviously, you’d like to always play from a lead, but the team shows good resilience to come back, and hopefully we can find some games where we can jump up to a lead and go from there.”

Flint is 16-30-4 for 36 points, fifth in the West Division and 10th in the Western Conference, but Butler said there are ample reasons for the Battalion to be wary, not the least of which is the coaching of Ryan Oulahen, a former captain and assistant with the Troops.

“You can’t look past anybody. We’re not a good enough team to do that. I mean they’ve been playing good hockey lately. Sometimes your record doesn’t indicate it, but they won three in a row before they just lost. So they’re a good team, and obviously Ryan’s probably excited to come back to North Bay. He coached here for a few years, and they’ve got some players on their team that played here, and I think that’s always extra motivation for kids as well.”

Further down the list, left winger Max Kislinger, a German import dealt by the Battalion in the 2017 offseason, has six goals and seven assists for 13 points in 41 games.

In addition, goaltender Garrett Forrest’s OHL rights were traded to Flint after he played the 2015-16 season with the Powassan Voodoos of the Northern Ontario Junior Hockey League, the Troops’ junior A affiliate.

Right winger Justin Brazeau is the Battalion’s top points producer, with a team-leading 31 goals and 26 assists for 57 points, while left winger Luke Burghardt has 23 goals and a team-high 30 assists for 53 points. Defenceman Adam Thilander has five goals and 25 assists for 30 points. All have played 51 games.

The Canadian Mental Health Association is the presenting sponsor of the game in support of its #TalkToday program, the OHL’s mental health education and awareness campaign.

“You’ve got to be aware of things,” said Butler. “If you see players that don’t seem to be right that day, or they seem a little off the way they normally are, nowadays you’re more apt to ask them questions. ‘How are you doing today?’ ‘You okay?’ or whatever. You try to keep your door open if they’ve got stuff they want to talk to you about, and obviously there are support systems for them away from the rink.

“I think that as a society in general we’ve just become more aware of the challenges that people go through and we have a much better sensitivity to it now than we used to in the past.”

The Battalion completes weekend play by visiting the Peterborough Petes on Saturday night and the Kingston Frontenacs on Sunday.