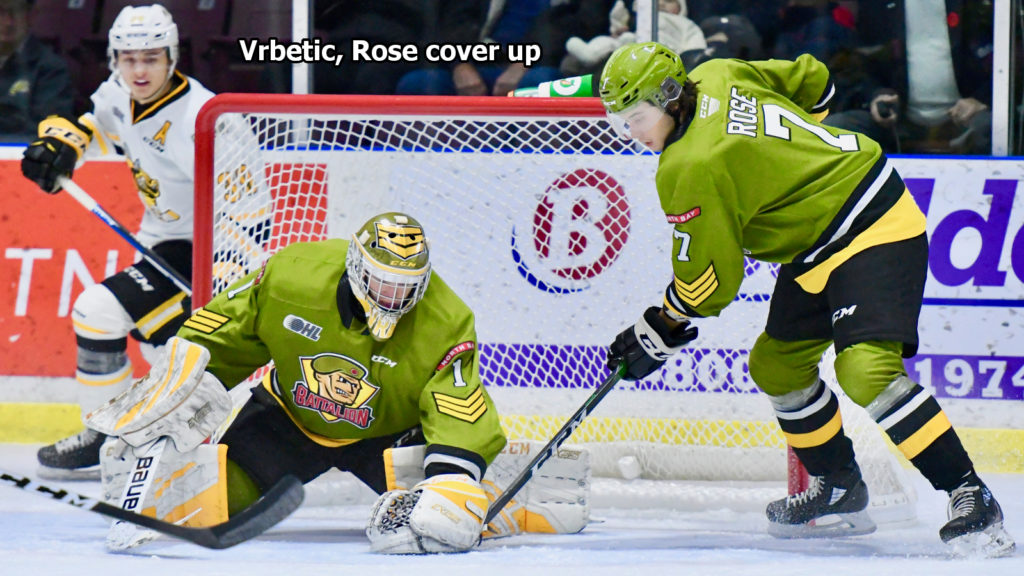 Anthony Tabak had one goal and an assist and Theo Hill scored what proved to be the winner into an empty net as Sarnia moved its won-lost-extended record to 9-8-0 for 18 points, fourth in the West Division. Goaltender Ethan Langevin faced 29 shots before 2,470 at the Progressive Auto Sales Arena.

Sarnia has won its last four games and nine of its last 10 after starting the season with seven losses.

Brandon Coe had one goal and one assist and Mason Primeau also scored for North Bay, 3-16-0 for six points, fifth in the Central Division. Goaltender Joe Vrbetic made 17 saves for the Battalion, which last won Oct. 14 in a 7-5 home-ice verdict over the Sault Ste. Marie Greyhounds.

The Troops completed a three-game weekend road trip, after a 4-3 loss Friday night to the London Knights and a 6-4 setback Saturday night against the Windsor Spitfires. The Battalion also lost 10 consecutive games in 1998-99, its inaugural season, and 2001-02.

Tabak struck first at 6:36 of the second period, slipping into the slot past Pacey Schlueting and beating Vrbetic low to the stick side. Coe replied on the power play at 13:30, steering Brad Chenier’s shot from the right-wing circle past Langevin. Matthew Struthers also assisted on Coe’s fifth goal of the season.

The Battalion outshot Sarnia 17-9 in the period. Langevin denied Kyle Jackson off the left wing early in the period, and Jackson and Cameron Peters tested the goaltender from close range late in the frame. Coe drilled the puck off the left post in the fifth minute, and Paul Christopoulos hammered it off the right post in the 19th.

Vrbetic stoned Ty Voit on a late breakaway and made key stops on Jacob Perreault and Jamieson Rees, while Sarnia’s Ryan Mast hit the left post with the Troops killing minors issued to Struthers for hooking and unsportsmanlike conduct at 8:46. Ryan McGregor hit the right post in the sixth minute.

Josling broke the deadlock at 8:08 of the third period, ripping the puck over Vrbetic’s blocker from the slot.

The Battalion failed to generate a good scoring chance with the man advantage midway in the period after Sam Bitten drew an instigating minor and misconduct for a brief fight with Ryan Thompson.

Vrbetic was back on the bench when Primeau pulled North Bay within a goal 24 seconds later, redirecting Nick Grima’s shot from the top of the right circle. Coe had the second assist on Primeau’s sixth goal.

The Battalion net again was empty when Josling collected his team-leading 18th goal at 19:18.

Sarnia, which held a 7-6 edge in shots in the first period, had three power plays. Vrbetic denied Braden Guy on a two-on-one rush with Rees in the fifth minute, stopped a Perreault effort off the left wing in the 11th, blocked a Josling drive from the slot in the 12th and foiled Ryan Roth late.

The Battalion plays host to the Hamilton Bulldogs at 7 p.m. Thursday on OHL Onside Night.

BATTALION BULLETS: The Battalion has an all-time won-lost-tied record against Sarnia of 25-25-1. The teams complete their two-game season series Feb. 13 at Memorial Gardens … Sarnia’s 21 shots were the fewest allowed by the Battalion this season, bettering the 27 afforded the Greyhounds in their 6-4 home-ice win Sept. 21. The Sting’s five shots in the third period trumped the previous low of six by the Oshawa Generals in the third period of their 5-4 road win Oct. 10 … Grima faced his onetime Sting teammates for the first time. North Bay acquired him in an Oct. 7 trade for a conditional fifth-round pick in the 2022 OHL Priority Selection. Defenceman Grima has five assists in 13 games with the Troops … The Battalion went 1-for-3 on the power play. Sarnia was 0-for-7 … The Battalion was without James Mayotte, Josh Currie and Liam Arnsby … Arnsby has been with Canada White, which finished fourth in the eight-team tournament, the best of three Canadian entries, at the World Under-17 Hockey Challenge at the Western Hockey League centres of Medicine Hat and Swift Current. Russia defeated the United States 6-2 in the title game Saturday night … The Battalion overnighted at Sarnia throughout the trip, making side visits to London and Windsor after leaving North Bay on Thursday … Rees has a 10-game points streak in which he has 10 goals and 16 assists for 26 points.