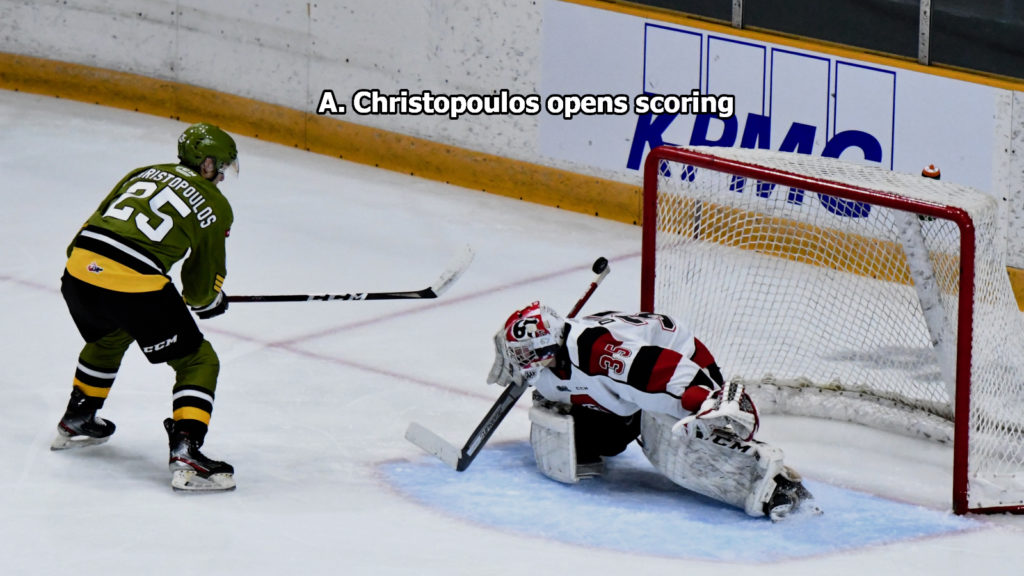 OTTAWA — Kyle Jackson scored the winning goal in the second period and added an assist as the North Bay Battalion edged the Ottawa 67’s 3-2 in an Ontario Hockey League preseason game Friday night.

Alex Christopoulos and Ty Nelson also scored for the Battalion, which won for the second time in two exhibition outings, having downed the visiting Owen Sound Attack 4-2 last Saturday.

Brady Stonehouse and Vsevolod Gaidamak scored for the losers, while goaltender Max Donoso faced 20 shots for Ottawa, which has a won-lost-extended record of 1-2-0 in preseason play.

The Battalion plays host to Ottawa at 4 p.m. Saturday to complete a home-and-home series. The Ontario government, in keeping with evolving protocols surrounding the coronavirus pandemic, announced Friday that Memorial Gardens capacity has been increased to 50 percent.

While Ottawa dressed a full complement, the Battalion had 17 skaters in uniform, one below the limit. Paul Christopoulos and Jackson, who returned Wednesday and Thursday respectively from National Hockey League camps, saw their first exhibition action.

Ottawa, which pulled Donoso with more than two minutes left in the final period, staged a last-ditch flurry, and DiVincentiis was forced to deny the home side without benefit of his stick during an extended siege. He finally smothered the puck for a whistle with 1:08 to play, at which point 67’s coach Dave Cameron called a timeout.

Ottawa continued to press the issue, but the Troops weathered the onslaught, missing a couple of efforts at the empty net.

Alex Christopoulos found himself alone behind the defence to take a pass from Josh Currie, at the blue line after an interception, and pitchfork the puck past Donoso at 4:47 of the first period to give the Battalion an early lead.

Defenceman Nelson scored with the man advantage at 7:20, connecting on a screened left-point shot on assists by Jackson and Liam Arnsby, who retrieved his stick after making an earlier kick pass. The goal by Nelson, North Bay’s first-overall pick in the 2020 OHL Priority Selection, was the Troops’ first power-play tally of the preseason.

Stonehouse replied at 11:47 after DiVincentiis thought he’d gloved a shot. In fact, the puck lay to the right of the net, with several players on both teams trying to play it as it squirted through the crease, with Stonehouse knocking it home.

DiVincentiis survived a ninth-minute gaffe when he advanced from his goal to play the puck but fanned on it, setting up Cameron Tolnai with a clear shot at a wide-open net. But Tolnai, a threat throughout the game, somehow ripped his shot just wide of the right post.

Later in the frame, Stonehouse ended up on top of DiVincentiis in a knot behind the Battalion net that also involved defender Tnias Mathurin. Referee Sean Reid monitored the scene from close range as the play moved to the Ottawa zone. The action finally was halted when the puck made it back into the neutral zone toward the North Bay end.

Gaidamak tied it 2-2 at 3:42 of the second period, driving to the net to convert a pass from Brenden Sirizzotti in the right-wing circle.

Jackson struck for what proved to be the winner at 9:39. Teddy Sawyer attempted a backhanded clearing pass across the Ottawa zone, and Wyatt Kennedy charged across the blue line at the right point to fire a shot that Jackson crisply deflected in the slot.

BATTALION BULLETS: The game was promoted as being televised live on YourTV in North Bay, but Rogers scrapped its production plans, announcing the decision Friday … Opening Battalion line combinations had Arnsby centring left winger Currie and right winger Christopoulos, Jackson pivoting left winger Owen Outwater and right winger Anthony Romani and Dalyn Wakely centring left winger Owen Van Steensel and right winger Nic Sima. Centre Michael Podolioukh and right winger Christian Stevens had rotating linemates … Initial defence pairings saw Simon Rose with Paul Christopoulos, Mathurin with Nelson and Cam Gauvreau with Kennedy … Reece Proulx backed up DiVincentiis … The Battalion was without Joe Vrbetic, Avery Winslow, Alexander Lukin, Brandon Coe, Matvey Petrov, David Campbell and Mitchell Russell … Petrov is expected to return to North Bay on Saturday from the Edmonton Oilers’ NHL camp, while Vrbetic is due Sunday from that of the Montreal Canadiens … Arnsby, Jackson, Rose and Nelson were alternate captains, with no one wearing the ‘C’ … North Bay went 1-for-2 on the power play. Ottawa was 0-for-2 … Danny Emerson was the other referee, as the OHL has reverted to a two-man system after a preseason stint with only one referee.