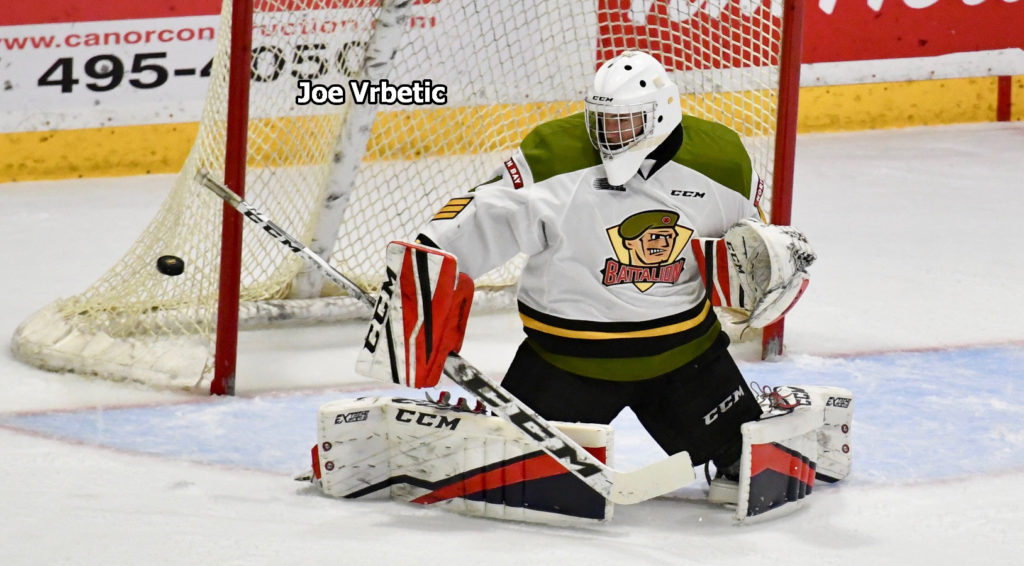 NORTH BAY, Ont. — While rostered players and the graduated Justin Brazeau get a taste of National Hockey League development camps, the North Bay Battalion has been preparing for the Canadian Hockey League Import Draft, to be conducted via the Internet starting at 11 a.m. Thursday.

Meanwhile, it was announced Wednesday that goaltender Joe Vrbetic, a second-round Battalion pick in the 2018 Ontario Hockey League Priority Selection, has been invited to the national under-18 camp that will help determine selections for the Canadian entry in the Hlinka Gretzky Cup competition in August.

The Battalion will exercise both of its selections in the two-round CHL Import Draft, which incorporates clubs from the OHL, Western Hockey League and Quebec Major Junior Hockey League.

North Bay is set to select 23rd in the first round and 83rd overall in the second but, with some clubs already having their two-man import quota at least partly filled, some will pass.

The Battalion had Austrian defenceman David Maier and Czech rearguard Zack Malik in the lineup at the end of last season, but neither will return for the 2019-20 campaign. Maier was a second-round choice in the CHL Import Draft last year, while Malik was acquired in a Jan. 8 trade from the Sudbury Wolves, who took him in the first round in 2017.

“We’ve got a good line on some good players, but who knows whether they’ll be there when we pick?” said Stan Butler, director of hockey operations and head coach.

The 60 CHL clubs draft in blended inverse order of the most recent regular-season overall standings, rotating the order of leagues. The Swift Current Broncos of the WHL have the No. 1 pick this year, followed by the OHL’s Kingston Frontenacs and QMJHL’s Acadie-Bathurst Titan.

While the Troops prepared to add European talent, centres Mason Primeau and Matthew Struthers have headed to NHL development camps.

Primeau, who turns 18 on July 28, is at the camp of the Vegas Golden Knights, who selected him in the fifth round, 141st overall, of the NHL Draft at Vancouver on Saturday. The Golden Knights’ camp sees players hit the ice Thursday for the first of three days of scrimmages at Las Vegas.

Struthers, a potential Battalion overager next season, reported for action at the Montreal Canadiens’ development camp which started Wednesday at Brossard, Que. Struthers, undrafted to the NHL, joined the Laval Rocket, Montreal’s American Hockey League affiliate, at the end of last season, scoring one goal in five games.

Vrbetic, selected 31st overall in 2018 from the Don Mills Flyers minor midgets, starred last season with the Powassan Voodoos of the Northern Ontario Junior Hockey League, seeing action in one game in relief with North Bay. He is one of three OHL goaltenders among the total of four invited to the Canadian camp at Calgary from July 26-30. Twenty-six forwards and 14 defencemen received invitations, including 13 OHL skaters.

In addition, three Battalion prospects are among 112 hopefuls invited to Hockey Canada’s development camp in advance of the World Under-17 Hockey Challenge, to be played Nov. 2-9 at the WHL centres of Medicine Hat and Swift Current. The camp is scheduled July 19-26 at Calgary.

Centre Liam Arnsby, defenceman Paul Christopoulos and rearguard Ty Hollett were North Bay choices in the OHL Priority Selection on April 6. Arnsby and Christopoulos were first- and second-round picks respectively from the Don Mills minor midgets, while Hollett was a fourth-rounder from the Navan Grads midgets.

At the camp, 64 forwards, 36 defencemen and 12 goaltenders will be divided into six teams for on- and off-ice training, fitness testing, intrasquad games and classroom sessions. Three Canadian entries, designated Red, White and Black, will take part in the November tournament.