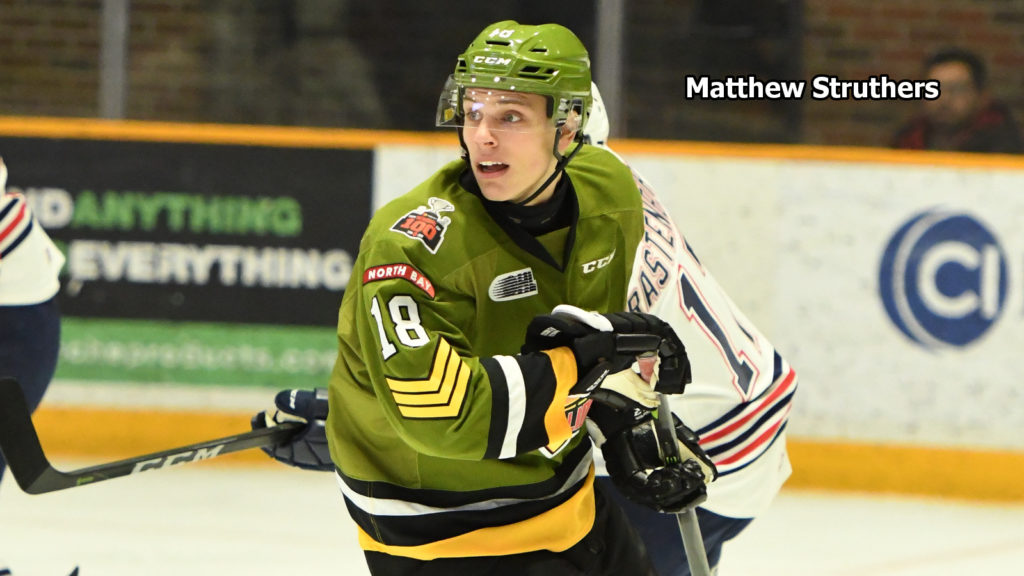 Struthers is No. 108, while right winger Justin Brazeau is 141st, left winger Luke Burghardt 153rd and defenceman Adam Thilander 155th on the list of 217 North American-based skaters ahead of the NHL Draft to be held June 22-23 at Dallas.

“I’m really happy that the list has recognized four of our players,” said Stan Butler, Battalion director of hockey operations and head coach. “It’s pretty neat that three 19-year-olds are on the list. I still think there are some other players on our team who, if they have a good second half, will find their way onto the final list as well.”

Struthers, a six-foot-two, 209-pound resident of Milton, Ont., was acquired by the Battalion in a trade Jan. 3 from the Owen Sound Attack. In nine games with North Bay, he has three goals and five assists for eight points. Struthers, who turned 18 on Dec. 26, had nine goals and as many assists for 18 points in 32 games with Owen Sound.

“It’s definitely exciting to see your name on any list, but at the end of the day it’s just a list, and right now I’m more worried about winning hockey games,” said Struthers.

“I think I need to make sure I continue to be good along the boards and use my size down low at both ends of the ice. Taking pucks into the hard areas is important as well. Continuing to work hard in practice and doing the little things will lead to individual success and ultimately team success.”

“It’s nice to be recognized by central scouting, especially it being my third time being entered in the draft,” noted Brazeau. “I just need to keep doing what I’m doing, play my game and keep working hard, and hopefully something good happens from it.”

“It’s exciting for sure to see your name on the list,” said Burghardt. “I have to finish strong and continue to produce throughout each game and continue to improve all areas of my game.”

Former Battalion defenceman Brady Lyle, a North Bay native who was traded to Owen Sound on Oct. 22, is rated No. 127.

Right winger Andrei Svechnikov of the Barrie Colts, a Russian import, is ranked No. 1.

The NHL also released a ranking of 31 North American-based goaltenders, including three OHLers, led by Jacob Ingham of the Mississauga Steelheads at No. 3. Top-rated is Alexis Gravel of the QMJHL’s Halifax Mooseheads.