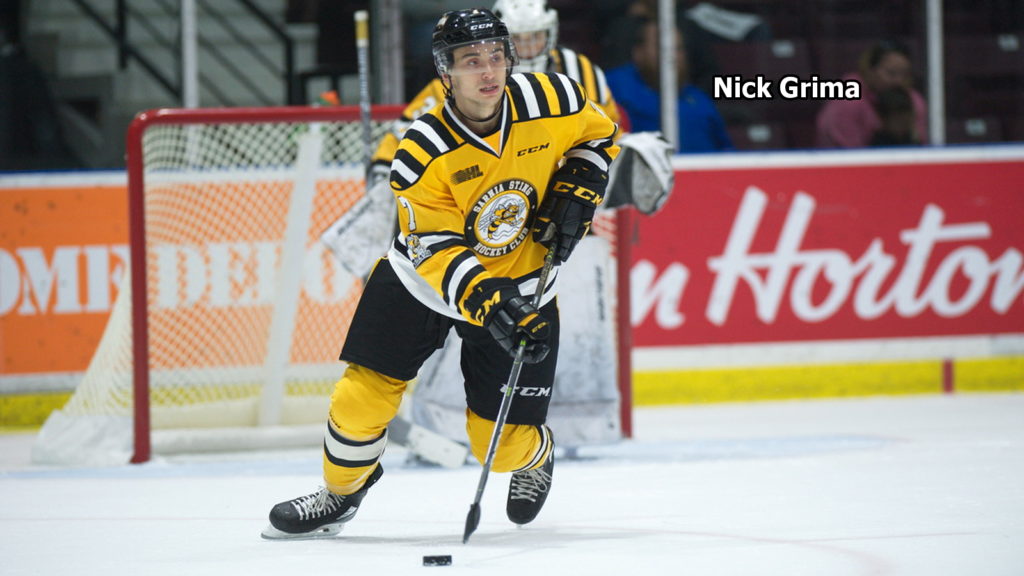 North Bay sent Sarnia a conditional fifth-round pick in the 2022 OHL Priority Selection for Grima, who becomes the fourth overager on the Battalion roster.

“He’s a right-shot defenceman, which we lack,” Stan Butler, director of hockey operations and head coach, said of Grima, who stands six feet and weighs 197 pounds.

“He has some experience playing on the right side. He’s a good puck mover and he defends well.”

Grima, a second-round pick, 25th overall, by the Peterborough Petes in 2015 from the Toronto Titans minor midgets, played 73 games with Peterborough over one and a half seasons before being traded to Sarnia during the 2016-17 campaign.

He has played a total of 235 OHL games, scoring 10 goals and earning 67 assists for 77 points with 157 penalty minutes. He had four goals and 26 assists for 30 points, amassing 82 penalty minutes, in 65 games last season but hasn’t played in the current campaign as Sarnia has had five overagers on the roster.

Clubs are permitted to carry unlimited overagers until Nov. 10, when the number must be cut to four. A further reduction to three is required by Jan. 9, a day before the trade deadline. No more than three may dress for any given game.

Henderson, acquired from Sarnia in a trade Jan. 6, 2018, that saw defenceman Cam Dineen go the other way, is a former Sting teammate of Grima.

The Battalion, with a won-lost-extended record of 1-5-0, entertains the Oshawa Generals at 7 p.m. Thursday.

Imports important to future
3 months ago