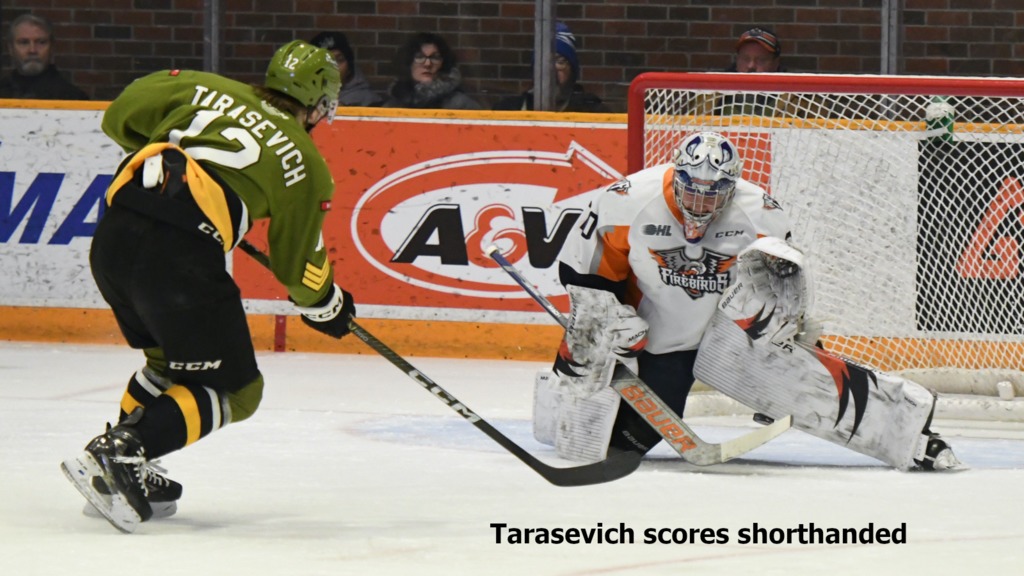 NORTH BAY, Ont. — Some wins are sweeter than others. For coach Ryan Oulahen, the North Bay Battalion’s 7-3 victory Sunday over the Flint Firebirds must have been especially satisfying.

The Battalion, having won its last six games, sports a won-lost-extended record of 29-10-1 for 59 points atop the Central Division. The Troops are 14-2-1 in their last 17 games, one-quarter of the season.

Oulahen graciously downplayed the personal element, noting the turnover in Flint personnel since his first OHL bench boss role and pointing to the importance of the win to the Troops as a whole.

Coulson Pitre scored two goals and Nolan Dann had one goal and two assists for Flint, which has lost four straight games and is 19-18-3 for 41 points, fourth in the West Division. Goaltender Will Cranley made 30 saves before a crowd of 2,149.

McDonald took over the third period, scoring a hat trick that pushed North Bay’s lead from 4-3 to the final score. The outburst started 36 seconds into the frame when he converted a backhanded blind pass off the end boards from Kyle Jackson. Josh Bloom, who matched Jackson with three assists, helped set up the goal.

McDonald, who blasted the puck home on the short side from the right wing at 4:11, scored directly off a faceoff win by Jackson at 15:14, collecting a 16th goal on the season.

Flint, which trailed 2-1 through 20 minutes, saw Pitre score on both ends of a double minor for roughing and unsportsmanlike conduct issued to Nelson at 2:06 of the second period. Pitre tipped home a Dann shot at 3:45 before snapping the puck from high in the right circle at 4:28 for his 17th goal.

Nelson tied it on the power play at 14:00, pinching hard to the right dot to drill the rubber behind Cranley after McDonald, who had a four-point game, and Jackson worked it along the end boards and from the right corner.

Nelson scored what proved to be the winner at 17:06, converting on the second of two penalties, for closing a hand on the puck and unsportsmanlike conduct, assessed to Blake Smith at 14:59. Nelson shoveled a backhander from deep on the left wing, assisted by Bloom and Matvey Petrov. It was defenceman Nelson’s 14th goal. In 106 career games, he has 23 goals and 77 assists for 100 points.

Romani opened the scoring on the power play at 4:47 of the first period, collecting his 12th goal from the right circle on assists by Dalyn Wakely and Avery Winslow.

Penalty killer Tarasevich struck at 8:40, stealing the puck from Tristan Bertucci at the right point and breaking away to beat Cranley between the legs. The unassisted marker, North Bay’s league-leading 11th shorthanded goal, was Tarasevich’s 11th.

Dann replied at 15:16 on an odd-man rush. Braeden Kressler and Gavin Hayes assisted on Dann’s seventh goal, his first in three games with Flint since a trade last Tuesday from the Niagara IceDogs.

The Battalion plays host to the Hamilton Bulldogs at 7 p.m. Thursday on Bell Let’s Talk Night.

BATTALION BULLETS: The Hockey for Hampers Food Drive accepted non-perishable items for the North Bay Food Bank, with Steve McArthur and Debbie Marson taking part in a ceremonial faceoff … It was Flint’s first visit to North Bay since Dec. 8, 2019, when the Firebirds won 5-3 in Stan Butler’s last game as coach of the Battalion … Oulahen was the Flint bench boss for two-plus seasons culminating in 2018-19, posting a record of 52-78-13. He assumed the North Bay job on an interim basis two days after the Firebirds’ last visit to Memorial Gardens and was confirmed in the role March 24, 2020. Oulahen is 84-46-12 with the Troops for an OHL record of 136-124-25 … The Battalion visits Flint on Feb. 25 … In 102 games, Petrov has 55 goals and 89 assists for 144 points, one more than Luch Aquino and Mitchell Russell and 21st in franchise history. Jackson, with 64 goals and 78 assists for 142 points in 159 games, is 24th all-time, two points ahead of Nick Paul … The OHL has corrected an error in official scoring and awarded Nelson an assist on Tarasevich’s goal in a 3-2 home-ice win Jan. 5 over the Oshawa Generals. Nelson scored the winner and assisted on the other two … The Battalion was 3-for-6 on the power play. Flint went 2-for-5 … The Battalion scratched Tnias Mathurin, who turned 19, Liam Arnsby, Luc Brzustowski, Brett Bouchard and Alexander Lukin … Flint’s Ethan Hay turned 18.