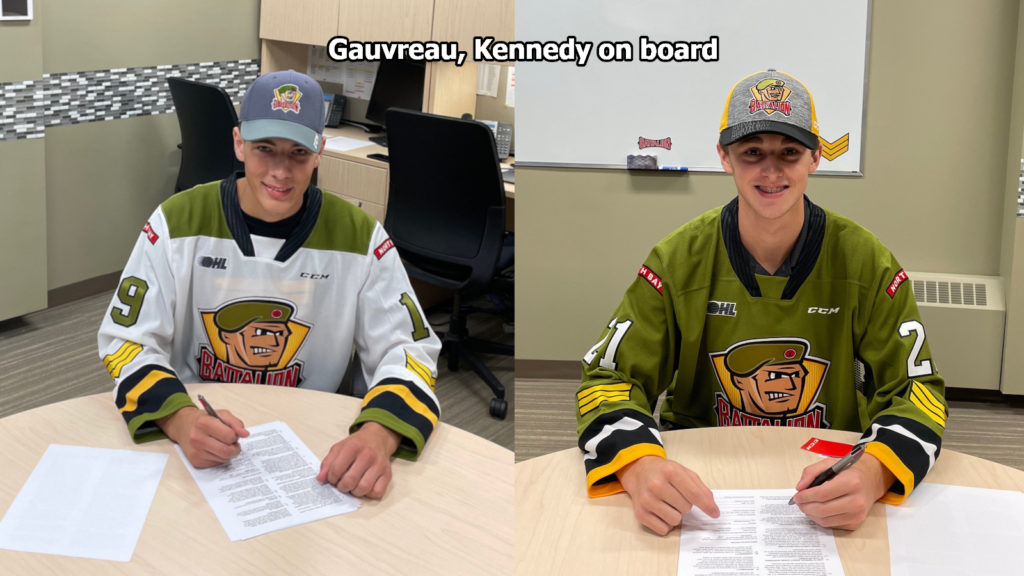 Gauvreau, a left shot who was a 10th-round pick in the 2019 OHL Priority Selection from the Hamilton Jr. Bulldogs, turned 18 on March 8, while the right-shot Kennedy was a third-round selection in June from the Rockland Nationals U18. He turned 16 on May 27.

Both signed after impressing at the Troops’ four-day training camp, which ended last Thursday.

“Cam is a guy who has just continued to get better year after year,” Battalion general manager Adam Dennis said of Gauvreau, a Hamilton resident who stands six-foot-one and weighs 185 pounds.

“He has always been a guy who plays with an edge, but his ability to skate and make decisions were on display this past week, and he really earned this scholarship.”

Gauvreau played in 2019-20 with the Hamilton Kilty B’s of the Greater Ontario Junior Hockey League, scoring four goals and earning five assists for nine points in 45 games while accumulating 47 penalty minutes. The coronavirus pandemic disrupted or eliminated action across hockey in 2020-21, including preempting the OHL’s campaign.

Kennedy, a Vars, Ont., resident who measures six-foot-four and 184 pounds, played 30 games with the Eastern Ontario Wild U15 in 2019-20, scoring eight goals and adding 11 assists for 19 points with 16 penalty minutes. In addition, he had two assists in three games with the Navan Grads U18.

“Wyatt is a player our scouts watched quite a bit through the pandemic in the various opportunities that were presented,” noted Dennis.

“The first things that jumped out about him are his size and his skating ability. We feel that with the help of our staff he can become a real tough defenceman to play against for years to come.”

The Battalion continues to prepare for its exhibition opener, a 2 p.m. date Saturday, Sept. 18, with the visiting Owen Sound Attack.