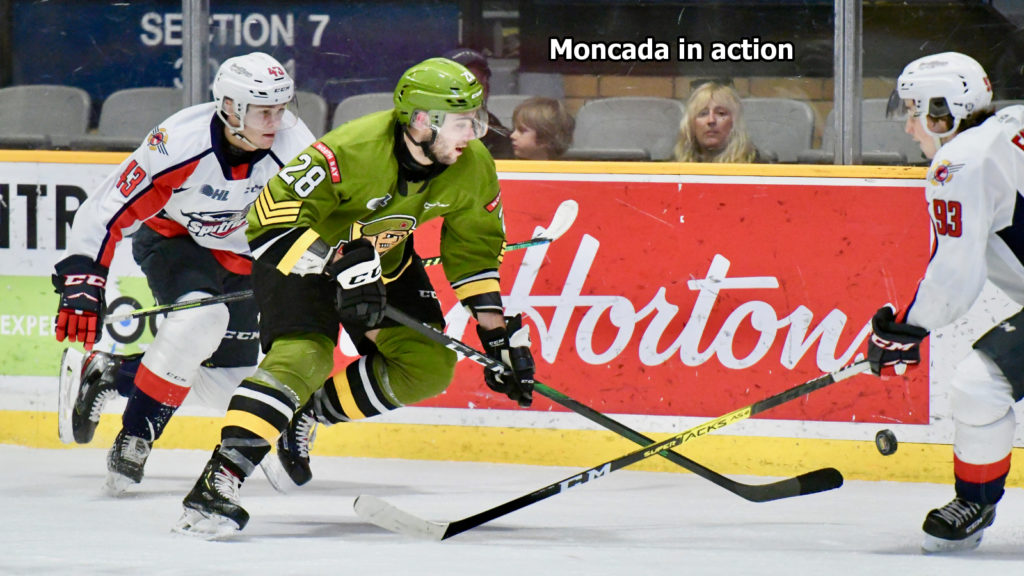 NORTH BAY, Ont. — Despite its most recent of six transactions dating to training camp having occurred almost a month ago, the North Bay Battalion has been central to speculation ahead of the Ontario Hockey League trade deadline Friday.

“We’re going to be listeners,” general manager Adam Dennis said Wednesday. “There’s no conversation that we’re not going to be a part of, but the main concern is going to be with the idea that the future is in the forefront for our team.”

Even without a trade, the Battalion was expected to have Czech defenceman Martin Has, 18, in the lineup for the first time at 7 p.m. Thursday against the visiting Mississauga Steelheads, but overage left winger Brad Chenier was set to serve the second game of a three-game suspension.

Dennis said Has “has decided to come to North America to further develop his career and his chances of having (a National Hockey League) career.”

“We’re going to help in that process. There are a lot of things to sort out before tomorrow’s game.”

North Bay chose Has, a right shot, in the first round of the Canadian Hockey League Import Draft last June. Standing six-foot-four and weighing 187 pounds, he played five games with the Czech Republic in the 2020 World Junior Championship in his native country, scoring one goal and earning two assists for three points. The Czechs were eliminated in a 5-0 loss to Sweden in the quarterfinals.

The Washington Capitals chose Has in the fifth round, 153rd overall, of the 2019 NHL Draft at Vancouver.

Left winger Niki Korpialho, the Battalion’s second-round pick in the CHL Import Draft, played 15 games, scoring two goals and adding one assist for three points, before leaving Dec. 13 for his native Finland. He hadn’t played since a 6-1 road loss Dec. 1 to the Ottawa 67’s.

“Our focus is selfish,” Dennis said of the Battalion’s approach ahead of the trade deadline, the first element of which is an overage deadline at noon Thursday.

“It’s about us. We’re going to do what we can to make our team better with the hope of bringing a championship here one day.”

Captain Chenier was suspended after drawing a major and misconduct for checking from behind in a 6-1 road loss last Saturday night to the Barrie Colts. He served the first game as the Battalion lost 3-2 in overtime Sunday to the visiting Windsor Spitfires.

The Battalion sent goaltender Christian Cicigoi to the junior A Powassan Voodoos on Tuesday. Cicigoi, 18, had an 0-7-0 record in seven games, with a 6.24 goals-against average and an .837 save percentage. He hadn’t played since a 6-1 loss Nov. 28 to the host Peterborough Petes, having suffered an injury in practice.

Its most recent trade saw North Bay acquire Cameron Lamour in a Dec. 15 deal with the Sarnia Sting for a conditional 11th-round OHL Priority Selection pick in 2022. A third-round choice by the Saginaw Spirit in 2016 from the Sudbury Wolves minor midgets, Lamour has partnered rookie Joe Vrbetic in the Battalion crease. Lamour, 19, had been playing with the NOJHL’s Rayside-Balfour Canadians.

The Battalion, with a won-lost-extended record of 9-27-2 for 20 points and fifth place in the Central Division, is 4-4-2 since Ryan Oulahen was named interim coach Dec. 10 after Stan Butler was reassigned to a role as special adviser.

Oulahen said much of the improvement has come from the players believing more in themselves.

“That’s probably the biggest change that we’ve noticed, the belief factor. And we’ve learned a little bit more probably in the games that we haven’t done so well in, because guys are upset. They’re disappointed in their effort. They’re disappointed that we’re losing games and maybe, seven, eight, nine weeks ago, that wasn’t the case.

The Battalion completes weekend play with a Friday night visit to the Sudbury Wolves.