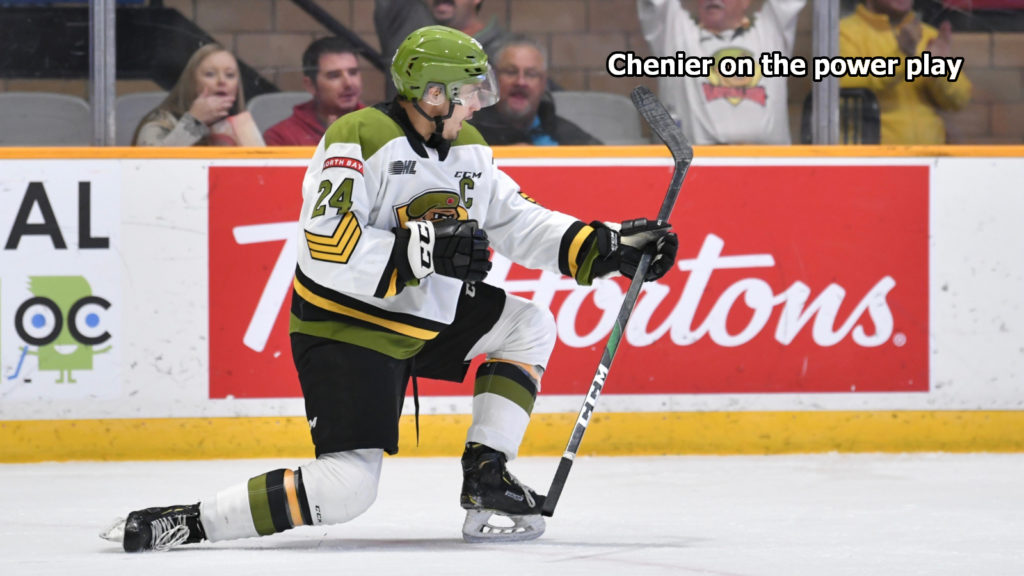 NORTH BAY, Ont. — The North Bay Battalion takes its newfound power-play prowess on the road for the next five games, starting with a three-game weekend road trip that opens against the Saginaw Spirit at 7:05 p.m. Friday.

The Battalion went 5-for-6 on the power play in a 7-5 Ontario Hockey League victory Monday over the visiting Sault Ste. Marie Greyhounds in the traditional Thanksgiving Day matinee.

Matthew Struthers scored three goals, two on the power play and one into an empty net, and added two assists for five points. Brandon Coe, Paul Christopoulos and Brad Chenier also had man-advantage goals, and Kyle Jackson netted the winner at even strength late in the third period.

It was North Bay’s second consecutive win, after an 8-2 romp last Saturday night over the host Niagara IceDogs, and moved the Troops’ won-lost-extended record to 3-6-0 for six points, third in the Central Division.

The Battalion visits the Flint Firebirds on Saturday night and Sault Ste. Marie on Sunday to complete weekend play. Two more road games follow next week for the season-high stretch of five while the Pinty’s Grand Slam of Curling takes over Memorial Gardens.

With Joe Vrbetic, who backstopped both wins, sidelined by injury, goaltender Reece Proulx is to partner Christian Cicigoi on the road, Stan Butler, director of hockey operations and head coach, said Wednesday. Proulx has been with the affiliated junior A Pembroke Lumber Kings of the Central Canada Hockey League.

“We made a decision about a week ago,” Butler noted of changes to the power play. “I just said to (assistant) Scott Wray, ‘Let’s just go with five forwards on the power play, and either we’ll either score or be scored upon,’ and so far it’s kind of working our way.”

The Troops, who were 4-for-28 on the power play in their first seven games, including 0-for-10 in the three games before the visit to Niagara, have gone 7-for-11 in their two most recent outings, although one power play at St. Catharines lasted just two seconds and still hasn’t been added to the total by the league office.

For the most part, the Battalion wasted no time capitalizing after Greyhounds went to the box, with power-play time of 13 seconds, 1:53, 32 seconds, 10 seconds and four seconds before scoring. That amounted to five goals in 2:52 with the numerical advantage.

The power-play opportunity that failed to produce a goal lasted just 18 seconds, when Mason Primeau took an interference call to offset a high-sticking infraction by Sault Ste. Marie’s Cullen McLean midway in the first period.

The first unit of five forwards consisted of Struthers, Primeau, Coe, Chenier and Mitchell Russell, who were on the ice for four man-advantage tallies. The other scoring quintet was made up of Liam Arnsby, Jackson and Luke Moncada with defencemen Christopoulos and Nick Grima.

The first unit also generated the Battalion’s two power-play goals in five chances at St. Catharines, which gave the Troops a man-advantage score for the first time since a 1-for-5 performance in an 11-3 road loss Sept. 27 to the Sudbury Wolves.

The franchise record for power-play goals in a game was set Dec. 11, 2005, when the Battalion went 6-for-12 in a 9-2 win at Brampton over the Sarnia Sting. Taylor Raszka scored two man-advantage goals, with the others by Luke Lynes, Michael Vernace, Aaron Snow and Nolan Waker.

The Battalion last scored five man-advantage goals in a 9-4 victory over the Erie Otters at Brampton on Jan. 22, 2006. The Troops were 5-for-14, with Wojtek Wolski setting a franchise record with seven points, on four goals, including two on the power play, and three assists. Other numerical-advantage tallies were produced by Lynes, with two, and Luch Aquino.

Butler said the Battalion has assigned left winger David Campbell, 17, to the junior A Blind River Beavers of the Northern Ontario Junior Hockey League. He was a fourth-round pick in the 2018 OHL Priority Selection from the North Bay Trappers minor midgets.

The Sault Ste. Marie resident, a native of Westerville, Ohio, had one assist in four games this season after a 2018-19 campaign in which he scored 16 goals and added 23 assists for 39 points in 54 games with the NOJHL’s Powassan Voodoos.

Meanwhile, the Canadian Cancer Society has said that $7,251 was raised at the Pink in the Rink event for breast cancer awareness last Thursday night in a 5-4 home-ice loss to the Oshawa Generals.

The money was generated mainly via a silent auction of pink-themed sweaters worn by the Battalion, with Arnsby’s fetching the top bid of $400. A chuck-a-puck contest, the sale of caps and sponsorship by the Canadian Automobile Association added to the total.

The game at Saginaw can be seen live on YourTV Channels 12 and 700 and heard on Country 600 CKAT.