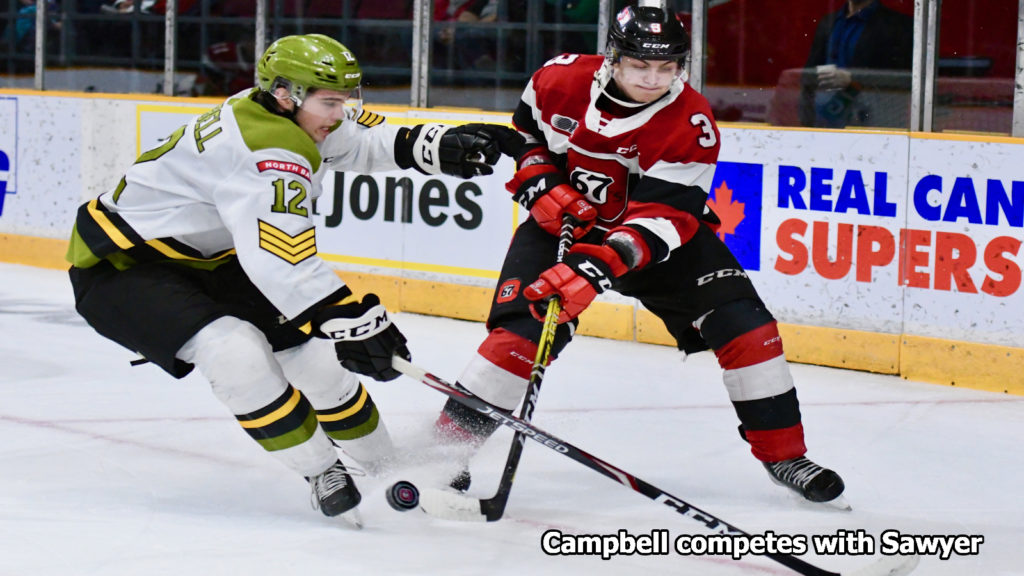 NORTH BAY, Ont. — The North Bay Battalion, which faced the Ontario Hockey League’s top team in its most recent outing, plays host to what might be seen as the Troops’ Western Conference equivalent at 7 p.m. Thursday.

The Battalion, on a seven-game losing streak, completed a three-game road trip with a 9-1 loss Sunday to the Ottawa 67’s in which the winners built 5-0 and 9-0 period leads before Brandon Coe replied 58 seconds into the final frame.

Oulahen said that, even with playoff prospects declining, the Troops have plenty to play for in the final quarter of the schedule, including roster spots next season and usage.

While the Battalion’s losses — the team’s last win was a 4-2 decision Jan. 24 over the host Sudbury Wolves — have mounted, Oulahen said development remains paramount.

“It’s going to take time, but we want the process to start looking better sooner rather than later.”

Luke Moncada, who assumed the captaincy when Brad Chenier was traded to Sudbury on Jan. 9, said he wants the Troops to show their best effort down the stretch.

North Bay visits the Barrie Colts on Saturday night and entertains the Mississauga Steelheads on Sunday in the first of four consecutive home games.

There are three former members of the Sting, 1-8-2 in its last 11 games, on the Battalion roster, in defencemen Braden Henderson and Nick Grima and goaltender Cameron Lamour.

Sarnia, without any former Troops, carries rookie Benjamin Gaudreau of Corbeil as one of its two goaltenders. Gaudreau, taken seventh overall in the OHL Priority Selection last April from the North Bay Trappers midgets, has played in 19 games, posting a 6-9-2 record with a 4.37 goals-against average and an .890 save percentage.

Fans, who are encouraged to bring non-perishable food items to donate, will have the chance to win a prize, compliments of The Gathering Place and its community supporters. There also will be a ‘Kiss Cam’ on the eve of Valentine’s Day.

The Gathering Place is a non-governmental, donation-dependent agency that serves more than 1,100 meals a week from its location on Cassells Street.

Troops, Wolves square off
15 hours ago