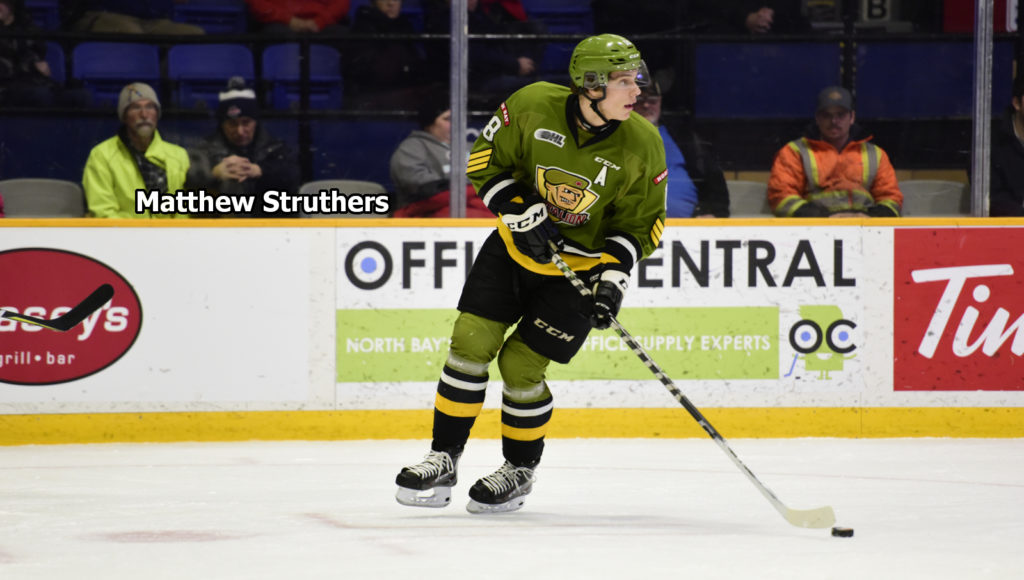 NORTH BAY, Ont. — The North Bay Battalion, preparing for a home-and-home set this weekend with the Owen Sound Attack, has just those two games left on its exhibition schedule.

After visiting Owen Sound at 2 p.m. Saturday, the Battalion plays host to the Attack at 2 p.m. Sunday.

North Bay has a won-lost-extended record of 0-3-0 in Ontario Hockey League exhibition play after three games in as many days in the Preseason Showcase at Kitchener. The Troops have 25 on the roster, numbering two goaltenders, seven defencemen and 16 forwards.

“Two of the three teams we played at Kitchener were down to their regular rosters, while we were rotating players in and out of the lineup,” Stan Butler, director of hockey operations and head coach, said Wednesday. The Troops faced the Peterborough Petes, Kitchener Rangers and Saginaw Spirit, the last two of which were set.

“Needless to say, that was a little challenging for some of our younger players.”

The showcase was held Aug. 30 to Sept. 1, before all OHL teams had last week off by league rule as National Hockey League rookie camps were conducted.

Butler noted that the Battalion will have to offset its youthfulness with strong energy.

“We’re going to be a young team,” acknowledged Butler. “We’re a little thin on 2000s, the 19-year-olds. People will tell you that 19-year-olds are important.

“If we’re young, we have to be a fit and hardworking team.”

But, Butler said, there is plenty of leadership among the older contingent.

“The three of them are very good. Luke Moncada and Mason Primeau, while a little younger, also are good leaders.”

With assistant coaches Adam Dennis and Scott Wray at a league meeting Wednesday in the Toronto area, Butler said, the Battalion will get to work on systems Thursday.

“We haven’t done any systems. With Scott and Adam off all day, we’ll get started on systems tomorrow.”

Centre Primeau is among 46 skaters named to the Vegas Golden Knights’ training camp, which opens with fitness testing Thursday at Las Vegas. Primeau was a fifth-round selection in the NHL Draft held June 21-22 at Vancouver.

Struthers, who underwent fitness testing with Montreal Canadiens rookies after seeing action last spring with the club’s American Hockey League affiliate, the Laval Rocket, has returned to North Bay with an upper-body injury. He faces further tests and is expected to be sidelined for two to four weeks, Butler said.

Rookie defenceman Ryan Thompson is expected to be unavailable for a similar time with a wrist injury.

The Battalion opens its regular-season schedule by playing host to the Barrie Colts at 7 p.m. Friday, Sept. 20.