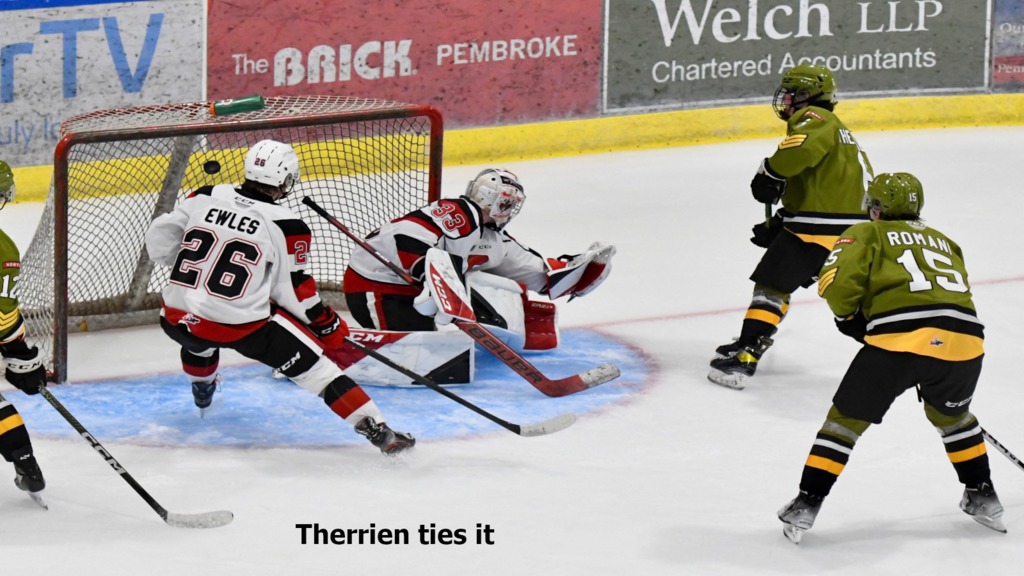 PEMBROKE, Ont. — Ethan Procyszyn’s goal at 19:11 of the third period lifted the North Bay Battalion to a 5-4 victory over the Ottawa 67’s in a hotly contested Ontario Hockey League preseason game Saturday night.

Procyszyn, who also had an assist, scored over Ottawa goaltender Max Donoso’s glove after Owen Van Steensel and Dalyn Wakely worked the puck from behind the net.

Wakely also contributed a goal, and Michael Podolioukh, Jacob Therrien and Nikita Tarasevich each scored as North Bay ended its exhibition schedule with a won-lost-extended record of 1-2-0. Goaltender Charlie Robertson was credited with 39 saves in going the distance for the first time as the Troops overcame a 2-0 first-period deficit.

The Battalion received a scare when diminutive rookie Therrien left the game after taking a knee-on-knee hit from Matthew Mayich at 18:04 of the second period. Helped off the ice by Van Steensel and athletic therapist Andrew Sachkiw, Therrien was said to have suffered a charley horse before returning to action for the final frame.

Thomas Johnston scored one goal and added an assist, while Cameron Tolnai, Caden Kelly and Chris Barlas also connected for Ottawa, 2-2-0. Starting goaltender Collin MacKenzie allowed three goals on 10 shots before being relieved at 9:12 of the second period by Donoso, who gave up two goals on 16 shots.

The Battalion, which dressed 15 skaters, three below the limit, was without eight players who are at National Hockey League camps and two others. The host 67’s dressed a full complement.

Ottawa, which trailed 4-2 at the second intermission, tied it on Kelly’s rebound tally at 1:19 of the third period and Barlas’s goal during a two-man advantage six minutes later.

The final period saw a flurry of penalties, with Van Steensel taking the only call, for crosschecking at 11:07, as the teams engaged in a melee behind the Ottawa cage and Luca Pinelli twice speared a Battalion player through the netting from the crease.

Tarasevich broke a 2-2 tie at 3:36 of the second period, overcoming a bad change that saw Ottawa gain a four-on-one rush. When it failed to connect, Tarasevich raced off on a breakaway to beat MacKenzie with a low wrister. Procyszyn, North Bay’s first-round pick in the OHL Priority Selection in April, had the assist.

Wakely, just back from the Ottawa Senators’ camp, took a centring pass from Van Steensel and directed the puck home on the first shot against Donoso at 9:33.

Johnston converted a wrister off a left-wing rush 48 seconds after the opening faceoff, and Tolnai doubled the Ottawa lead at 7:23, cashing a shot from deep on the left wing with a decoy in front.

Podolioukh collected his third goal of the preseason on a heavily screened left-point shot on the power play at 12:43, with assists to Paul Christopoulos and Anthony Romani.

Therrien tied it 2-2 just 52 seconds later after he was impeded on a breakaway. The 67’s botched the zone exit, and Therrien seized the puck on the right wing, darted to the crease and roofed the rubber over MacKenzie.

The Battalion opens its regular season at 7:07 p.m. Friday in the first of back-to-back road games against the Soo Greyhounds.