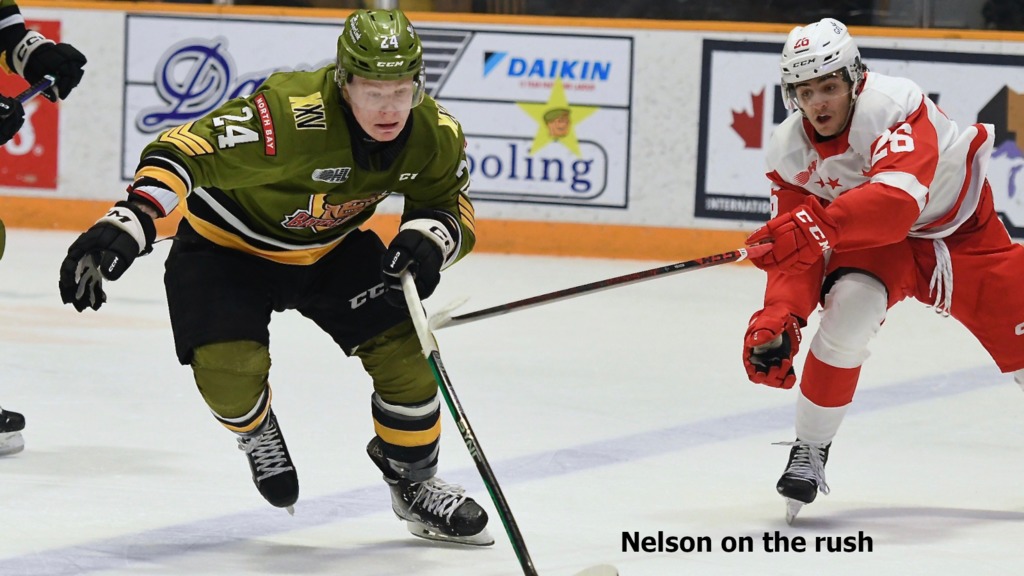 NORTH BAY, Ont. — Matvey Petrov and Ty Nelson each scored two goals and added an assist to pace the North Bay Battalion to a 7-4 comeback victory over the Soo Greyhounds in an Ontario Hockey League game Thursday night.

Kyle McDonald contributed two goals, including an empty-netter, and Avery Winslow also scored for North Bay, which got 31 saves from goaltender Charlie Robertson.

The Battalion, on a five-game winning streak, boasts a won-lost-extended record of 28-10-1 for 57 points, first in the Central Division, and is 13-2-1 in its last 16 games, including a 2-1 decision via shootout Wednesday night over the host Sudbury Wolves.

Marco Mignosa had one goal and one assist and Kalvyn Watson, Mark Duarte and Jordan D’Intino provided a goal apiece for Soo, 12-15-11 for 35 points, fifth and last in the West Division. Goaltender Samuel Ivanov surrendered six goals on 34 shots before a Memorial Gardens crowd of 1,967.

Duarte connected for his 15th goal of the season at 1:07 of the second period, converting a cross-ice pass from Justin Cloutier for a 3-1 lead, before the Battalion erupted with four straight goals in the frame and five overall.

Nelson got the rally started on the power play at 4:48, converting on the second half of a double minor for high-sticking issued to Ryan Thompson. Defenceman Nelson one-timed a feed across the top of the zone from Petrov, with Kyle Jackson also assisting.

Petrov cashed a pass from the right-wing corner from Pasquale Zito, who had three assists, at 7:32 to tie it with his 15th goal, and Nelson gave the Troops a 4-3 lead at 11:02 with a shot from the mid blue line. Brayden Turley, who earned his first OHL point, and Zito assisted on Nelson’s 12th goal.

With a dozen seconds left in the period, the Battalion broke out on a three-on-two rush, with defenceman Winslow connecting from the left circle at 19:58. Zito had the lone assist on what proved to be the winning goal.

McDonald made it 6-3 at 2:48 of the final period when he took a pass from Nelson and cruised across the ice from the left wing to the middle to wire the puck past Ivanov.

D’Intino scored from a sharp angle at 10:22 before Soo coach John Dean pulled Ivanov for a sixth skater and McDonald raced to the crease, fending off Matthew Virgilio to pop the puck into the empty net at 16:42 for a 13th goal on the season.

Petrov opened the scoring at 6:05 of the first period. Nelson forced a turnover in the left corner, and the puck went to Nikita Tarasevich on the end boards for a feed to Petrov.

Watson replied with his 18th goal at 12:34, backhanding the rebound of a Julian Fantino shot over the prone Robertson, and Mignosa beat the goaltender to the short side on a rush down the right wing 1:49 later.

Zito, who had an apparent goal disallowed at 5:10 when it was ruled upon video review that the net was loose, just failed to tap home the puck at the left post off a Petrov setup in the 19th minute.

Virgilio and Jacob Therrien fought at 16:08, with Therrien ending up on top of his opponent despite conceding five inches in height.

The Battalion plays host to the Flint Firebirds at 2 p.m. Sunday. The Hockey for Hampers Food Drive will accept non-perishable items for the North Bay Food Bank.

BATTALION BULLETS: A table was set up in the concourse to collect donations in support of Willie Cowie, a longtime North Bay Minor Hockey Association volunteer who lost part of a leg to diabetes and is in hospital … The teams completed their four-game series, with the Battalion going 2-1-1. In season-opening games at Sault Ste. Marie, North Bay won 4-1 on Sept. 30 before Soo prevailed 6-4 on Oct. 1. The visiting Greyhounds won 4-3 via shootout Dec. 8 … Robertson has been named to Team Red for the Kubota CHL-NHL Top Prospects Game at Langley, B.C., on Jan. 25. The game will showcase the top 40 Canadian Hockey League skaters and goaltenders eligible for the 2023 National Hockey League Draft … Petrov tied Luch Aquino and Mitchell Russell for 21st place on the all-time franchise scoring list with 143 points, three more than Nick Paul. In 101 games, Petrov has 55 goals and 88 assists. Jackson, with 64 goals and 75 assists for 139 points in 158 games, tied Aaron Van Leusen for 25th place … The Battalion went 1-for-2 on the power play. Soo didn’t have a man advantage … The Battalion scratched Tnias Mathurin, Liam Arnsby, Luc Brzustowski, Brett Bouchard and Alexander Lukin, who was sick … Brzustowski left the Sudbury game with a broken finger … Soo, which sent left winger Tyler Savard to the Barrie Colts on Jan. 3, dealt Landen Hookey to the Owen Sound Attack on Monday for fellow right winger Fantino.