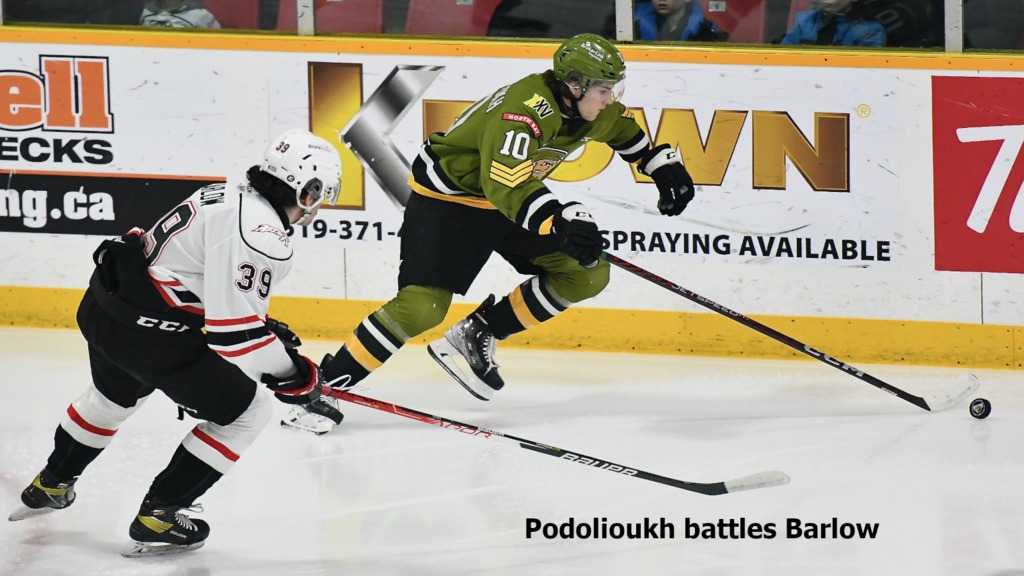 OWEN SOUND, Ont. — Dalyn Wakely scored two goals, including the winner, to pace the North Bay Battalion to a 6-3 victory Saturday night over the Owen Sound Attack in a battle of Ontario Hockey League division leaders.

Anthony Romani had one goal and one assist and Owen Van Steensel, Alexander Lukin and Justin Ertel, the last into an empty net, each provided a goal for North Bay, which improved its won-lost-extended record to 14-6-0 for 28 points atop the Central Division.

Rookie goaltender Charlie Robertson made 31 saves, including against Colby Barlow on a third-period breakaway out of the penalty box, before 2,267 at the Harry Lumley Bayshore Community Centre. The Battalion completed a two-game road trip after a 3-2 loss Friday night to the Kitchener Rangers.

Kaleb Lawrence and Barlow contributed one goal and one assist apiece for Owen Sound, which got its other goal from Ethan Burroughs as goaltender Nick Chenard recorded 26 saves.

Van Steensel struck at 1:53 of the first period for his fourth goal of the season, going to the net to put the rebound of a shot by Liam Arnsby between Chenard’s legs. Romani drew the second assist.

Lukin drove deep on the left wing and ripped the puck toward the crease, where it deflected off Chenard at 8:27. Ethan Procyszyn assisted on defenceman Lukin’s first goal, matching his total as a rookie last season.

Lawrence replied on the power play at 15:04 with the quick conversion of a pass from Cedrick Guindon, but 25 seconds later Romani took a feed across the goalmouth from Michael Podolioukh and rifled the rubber home for a fifth goal.

Wakely made it 4-1 at 2:14 of the second period, converting his own rebound off the end boards on assists by Ty Nelson and Wyatt Kennedy.

Burroughs connected at 12:33, putting home the rebound of a screened shot by Guindon after a turnover, and Barlow pulled Owen Sound within a goal at 18:33. Brayden Hislop fell against an Attack rush, and Barlow blasted his 12th goal from the right wing on assists by Deni Goure and Matthew Papais.

Barlow emerged from the penalty box at 2:21 of the final period, taking a breakaway pass at centre ice, but Robertson slid to his right to make the stop, and the rebound was sent high and wide.

Wakely then netted his team-leading 12th goal at 7:57 to give the Troops a 5-3 lead. Wakely, on the right wing, had an open net to convert a Nikita Tarasevich pass, with Nelson also assisting.

Owen Sound pulled Chenard for a sixth skater at 16:10 and applied consistent pressure in the North Bay zone, including during a high-sticking call issued to Arnsby 49 seconds later, before Josh Bloom generously fed Ertel the puck for the empty-netter at 19:46, giving him his seventh goal.

The Battalion plays host to the Ottawa 67’s at 7 p.m. Thursday on Special Olympics Night.

BATTALION BULLETS: It was the Battalion’s first regular-season visit to Owen Sound since Oct. 26, 2019, when the Attack posted a 6-3 win. Mitchell Russell, Luke Moncada and Harrison Caines scored for the Troops. The 2020-21 season was cancelled because of covid, and last season saw inter-conference action severely limited. The Battalion has, however, played two exhibition games, one at home and one away, in recent years against Owen Sound … The Troops’ Matvey Petrov left the game with what was described as a sore wrist … North Bay went 0-for-3 on the power play. Owen Sound was 1-for-4 … The Battalion was without Tnias Mathurin, Avery Winslow, Kyle McDonald and Brett Bouchard … Arnsby, who sat out the first half of the third period with a misconduct for a mouthguard violation, was set to turn 19 on Sunday … The Battalion overnighted at Owen Sound after the Kitchener game … Among the missing for Owen Sound, which dressed 11 forwards and seven defencemen, were Teddy Sawyer, Madden Steen and Gavin Bryant … The Attack acquired defenceman James Petrovski from the Flint Firebirds in a trade Friday for three OHL Priority Selection picks. Petrovski debuted with his new team in a 3-2 road victory Friday night over the Oshawa Generals, assisting on the winning goal by Barlow. Petrovski was a second-round choice in 2021 from the Toronto Titans U16s.