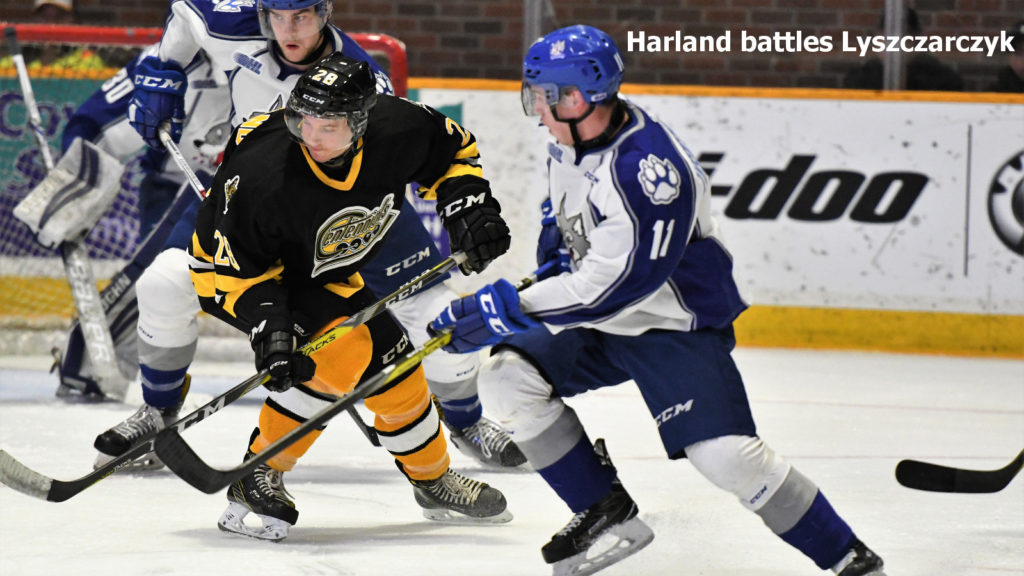 NORTH BAY, Ont. — Max Kislinger scored his first two goals of the season, including an empty-netter, to help the North Bay Battalion to a 6-3 Ontario Hockey League victory Thursday over the Sudbury Wolves on Centennials Alumni Night.

Brett McKenzie, Justin Brazeau and Adam McMaster each had one goal and one assist while Zach Poirier also scored and Steve Harland provided three assists for the Battalion, which moved its won-lost-extended record to 18-22-3 for 39 points, maintaining a tie with the Niagara IceDogs for third place in the Central Division.

Goaltender Brent Moran faced 33 shots before a crowd of 2,751 who watched the Battalion skate in the black and gold colours of the North Bay Centennials franchise, which left the Gateway of the North in 2002. It was the fourth annual observance, with the Troops posting a third win.

The Battalion, without four regular defencemen, all injured, got solid performances in the OHL debuts of rearguards Dayton Murray and Eric Nagy, called up from the affiliated Powassan Voodoos of the Northern Ontario Junior Hockey League.

David Levin scored two goals and Macauley Carson one for Sudbury, 19-20-5 for 43 points, second in the division, one point behind the Mississauga Steelheads, who lost 3-2 via shootout to the host Peterborough Petes. Goaltender Jake McGrath made 32 saves.

“I was very happy with our game,” said coach Stan Butler, who hadn’t seen the Battalion score more than three goals since a 6-0 home-ice win Dec. 8 over the Flint Firebirds.

“Our guys played well as a group. It really helped that we had six defencemen, and the two kids who came up from Powassan played great. We had a good team effort. Our first period gave the guys a lift. It was nice to see Poirier get a goal and Kislinger get a goal. When other guys are scoring, it makes it a lot easier on Harland and McKenzie.”

North Bay erupted for three first-period goals, with Poirier striking first on the power play at 6:48, beating McGrath high to the stick side from the right-wing circle. Adam Thilander and McMaster assisted on Poirier’s ninth goal.

McKenzie doubled the lead exactly two minutes later. McGrath denied Harland’s wraparound attempt at the left post, but the puck made its way to McKenzie, who lofted it over McGrath’s glove from the slot. Murray had the second assist on McKenzie’s 19th goal.

Kislinger scored at 12:17 when he got loose on the left side to take a pass from Harland and direct the puck between McGrath’s pads. Nagy also assisted.

The Troops outshot Sudbury 12-9, but Moran was busy in denying Ryan Valentini, Dmitry Sokolov and Alan Lyszczarczyk. Valentini put a backhander off the right post in close in the 17th minute, and the puck rolled along the goal line before Moran smothered it.

The Wolves had a two-man advantage when Levin scored at 12:00 of the second period, beating Moran to the stick side from the slot, and Carson pulled the visitors within a goal at 17:56 when he poked home a loose puck in the crease.

Brazeau scored what proved to be the winner at 19:03 when his snap shot from the top of the right circle eluded McGrath to the far side as defender Zach Wilkie screened the goaltender in an attempt to block the shot. Thilander and Kyle Potts assisted on Brazeau’s 12th goal.

McMaster restored the Battalion’s three-goal lead 47 seconds into the third period. Brazeau outmuscled Owen Lalonde at the left post and fed the puck to McMaster, who swept it past McGrath. McMaster netted his fourth goal and second in two games.

Levin struck for his 14th goal from deep on the right side on a backdoor play with the man advantage at 5:28, and the Wolves prowled in Battalion territory for much of the rest of the game. Moran stopped Aiden Jamieson from the right circle in the eighth minute, and Darian Pilon tipped a Wilkie shot wide of the right post in the 19th.

Kislinger finished the scoring at 18:56. Harland, who narrowly missed the open net, and McKenzie assisted. Kislinger has been limited to 14 games by a broken wrist and his time with Germany at the second-tier world junior championship.

The Battalion visits Peterborough at 7:05 p.m. Saturday. The game can be seen live on CogecoTV Channel 12 and heard on Country 600 CKAT.