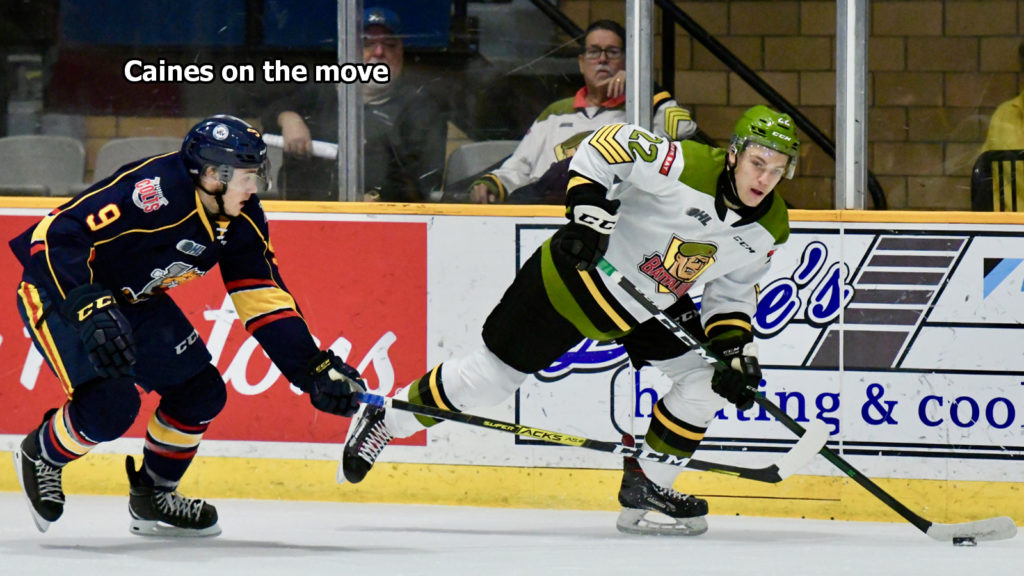 “There are a lot of points still on the table, and we want to take some,” assistant coach Adam Dennis said Wednesday.

The Battalion has a won-lost-extended record of 4-17-0 for eight points, fifth in the Central Division, while Oshawa is 14-5-1 for 29 points, third in the East Division. The Generals have lost their last two games, both on the road, 4-1 last Friday night to the Sudbury Wolves and 3-1 Saturday night to the Sault Ste. Marie Greyhounds.

The Battalion, which visits the Hamilton Bulldogs on Friday night and plays host to the Niagara IceDogs on Sunday, defeated the visiting Barrie Colts 5-4 last Sunday for its first win since a 7-5 home-ice decision Oct. 14 over Sault Ste. Marie.

North Bay, which led 4-1 midway in the second period, saw Barrie rally to tie it with 4:59 left in the third. For the Battalion, it brought back memories of a 4-1 third-period lead that evaporated in a 6-4 road loss Nov. 9 to the Windsor Spitfires, the ninth defeat in the losing streak.

“For them to tie it up, to go 4-4, we got to see a little bit of what our guys were about and our character and our result,” Dennis noted of the Barrie game, in which Harrison Caines scored the winning goal at 18:29 of the final frame, assisted by Cameron Peters and Liam Arnsby.

Other Troops on the ice were Pacey Schlueting, Simon Rose and goaltender Joe Vrbetic, with third-year defenceman Rose the most experienced, as each of Caines, Peters and Schlueting is in his second season and Arnsby, who turned 16 Wednesday, and Vrbetic are rookies.

“It seems that what we’re doing is starting to pay off a little bit in terms of the young guys’ development,” Dennis noted of the Battalion, which has the league’s youngest roster and has committed to providing the less experienced members with plenty of ice time.

“For the staff, we just felt good for the kids,” said Dennis. “They deserved to be rewarded.

“It was a long streak. It always seems longer than it is, but our guys worked hard through it at times, and it was a lesson that we never want to have to learn again.”

Rookie rearguard Paul Christopoulos will sit out against Oshawa to complete a two-game suspension for putting the puck into the stands in a 5-1 home-ice loss last Thursday night to Hamilton, while the status of left winger Niki Korpialho, who left the Barrie game with an upper-body injury, was unknown.

“He’ll be evaluated as the week goes,” Dennis said of the Finnish import.

Left winger Brad Chenier paces the Battalion in points production with nine goals and a team-leading 11 assists for 20 points in 21 games, while centre Matthew Struthers has scored 10 goals and added nine assists for 19 points in as many games.

Tied with 15 points are centre Luke Moncada, who has 10 goals and five assists in 21 games, Mitchell Russell, who has six goals and nine assists in 20 games, and fellow right winger Brandon Coe, who has scored five goals and earned 10 assists in 19 games. Struthers and Moncada are tied for the team lead in goals.

Three centres top Oshawa’s scoring statistics, all from 20 games. Brett Neumann has a team-high 15 goals and 12 assists for 27 points, Allan McShane has six goals and a team-leading 15 assists for 21 points, and Ty Tullio has 10 goals and as many assists for 20 points.

The Oshawa game marks My Team Cares Night, presented by Enercare in support of the North Bay Food Bank. Enercare Bam Bam Cheer Sticks will be awarded to the first 1,000 fans, who are asked to provide a non-perishable food item for the food bank.