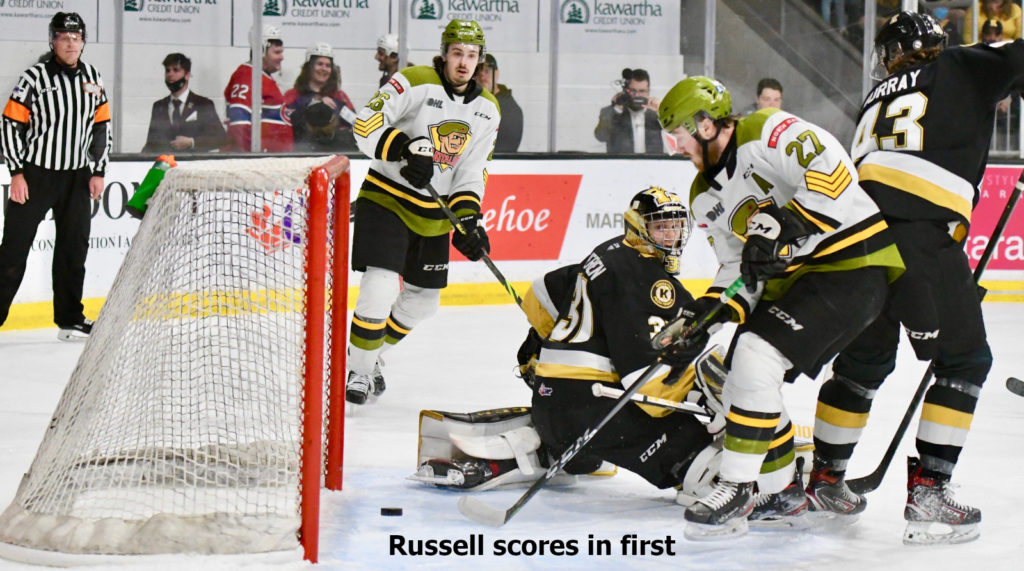 KINGSTON, Ont. — Mitchell Russell scored two goals, including the eventual winner, to pace the North Bay Battalion to a 4-3 victory Thursday night over the Kingston Frontenacs and a lead of three games to one in their Ontario Hockey League second-round playoff series.

Kyle McDonald and Paul Christopoulos scored a goal apiece for second-place North Bay, which can capture the best-of-seven Eastern Conference semifinal in Game 5 at 7 p.m. Saturday at Memorial Gardens.

Goaltender Dom DiVincentiis, in a second straight start, made 32 saves before 2,718 at the Leon’s Centre, where the Troops swept two games, having won 6-3 Tuesday night.

Francesco Arcuri had one goal and one assist while Lucas Edmonds and Martin Chromiak each provided a goal for the third-place Frontenacs, who battled back from a 4-0 deficit in the last half-period, including two goals in the last minute, for a score that flattered them. Goaltender Leevi Merilainen faced 37 shots.

Grayson Ladd left after the first period with an upper-body injury and didn’t return, reducing the Battalion defence corps to five, including Cam Gauvreau, who made his postseason debut in place of Alexander Lukin.

Russell scored the fourth Battalion goal on the power play at 5:53 of the third period, cashing a cross-crease shot-pass from Matvey Petrov on the left wing to the right of the goalmouth. Ty Nelson also assisted on Russell’s league-leading 11th goal of the playoffs. It was his fifth postseason game-winner, tied with Barclay Goodrow for second place in franchise history behind Matt Duchene’s six.

Edmonds connected at 9:58, jabbing at the puck with DiVincentiis down, and each team killed a penalty in the ensuing minutes.

With Merilainen pulled for a sixth skater, Chromiak tipped a screened lob by Jordan Frasca from the left-wing boards at 19:19 before the Battalion’s Owen Van Steensel was sent off for tripping at 19:28.

Arcuri ripped home a puck that emerged from behind the net at 19:54 to complete the scoring with his sixth goal.

McDonald struck first at 15:17 of the opening period, taking a stretch pass up the middle from Van Steensel and driving between Ben Roger and Thomas Budnick to beat Merilainen with a snap shot. It was McDonald’s fourth goal.

Russell tapped the puck off the goal line into the net on the power play at 17:24 after Merilainen got a piece of Brandon Coe’s drive from the right side. Nelson also assisted.

Coe set up Ladd for a solo dash to the net in the ninth minute, but Merilainen got his left shoulder on the scoring effort.

Christopoulos, with assists to Michael Podolioukh and Gauvreau, raced down the left wing and drove to the circle to beat Merilainen at 7:39 of the middle period for a 3-0 lead. It was defenceman Christopoulos’s second goal, the first having been a shorthanded empty-netter in the postseason opener against the Ottawa 67’s.

If a sixth game is needed, it will be played Sunday night at Kingston.

BATTALION BULLETS: The Battalion has an all-time won-lost record of 14-21 in the fourth game of a postseason series, including 8-8 on the road. The Troops are 6-7 in fourth games since relocation from Brampton in 2013 and are 4-2 in fourth games on the road as North Bay … In 13 career playoff games with the Battalion, Russell has 12 goals and nine assists for 21 points, two more than Dylan Blujus and Marcus McIvor and 13th in franchise history. Russell’s 12 goals are tied with Raffi Torres for ninth place … In 16 postseason games, Coe has six goals and 13 assists for 19 points, tied with Blujus and McIvor for 14th place in franchise annals … McDonald had a game-high eight shots on goal … Petrov has a five-game points streak in which he has one goal and four assists for five points … The Battalion went 2-for-4 on the power play. Kingston was 1-for-6 … In addition to Lukin, the Battalion scratched Nic Sima … Kingston scratched Jackson Stewart, Christopher Thibodeau, Mitchell Brooks, Quinton Burns and Maddox Callens … Gage Heyes and Nathan Poole each saw his first action of the series for Kingston … Arcuri has a six-game points streak in which he has five goals and six assists for 11 points. He has four goals and five assists for nine points in the series … Chromiak has a goal in each of the last five games … Drew Jackson and Tyson Stewart were the referees.