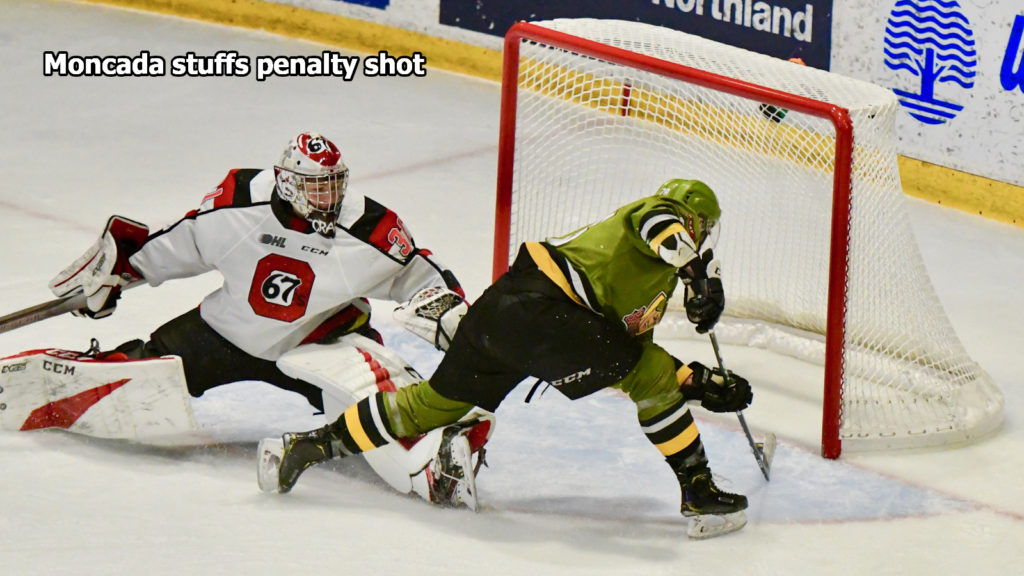 NORTH BAY, Ont. — Luke Moncada scored three goals, including the winner on a penalty shot, to power the North Bay Battalion to a stunning 6-2 victory Thursday night over the Ottawa 67’s, who boast the Ontario Hockey League’s best record.

James Mayotte, Alex Christopoulos and Chad Denault also scored for North Bay, which won a third consecutive game for the first time this season to move its won-lost-extended record to 14-38-3 for 31 points, last in the Central Division, Eastern Conference and league. Goaltender Joe Vrbetic provided 28 saves in a stellar showing before a crowd of 1,890.

Jack Beck and Jack Quinn scored for Ottawa, the top-ranked team in the Canadian Hockey League, which lost a third straight game and is 42-10-1 for 85 points atop the East Division, conference and OHL. Goaltender Will Cranley, who faced 35 shots, lost for the first time since a 4-3 setback Oct. 6 to the host Kitchener Rangers. He had won 13 subsequent decisions.

“Once again we showed some real good strength in our end. We got contributions from a whole bunch of different guys, which equaled a total team effort and a big victory. We were jumping all night, and that was the key. We wanted to play on our toes. We did a good job getting after them, limiting their time and not forcing the game. We were waiting for our opportunities and playing really good, strong defensive hockey.”

North Bay emerged from the first period with a 2-1 lead, after Moncada opened the scoring when he raced down the left wing and ripped a shot over Cranley’s glove from a sharp angle at 3:29. Harrison Caines and Nick Grima earned assists.

Beck, assisted by Austen Keating and Marco Rossi, replied at 9:15 off a three-on-one rush. His attempted goalmouth pass bounced off Mayotte’s stick back to Beck, who put the puck past Vrbetic who had slid to play the pass.

Mayotte struck on the power play at 17:09, darting deep into the right-wing circle to convert a Kyle Jackson pass from behind the net. Grima had the other assist on rookie defenceman Mayotte’s first OHL goal.

The teams exchanged shorthanded goals in the second period, starting when Quinn collected his team-leading 46th goal of the season off Mitchell Hoelscher’s initial shot at 3:13.

Penalty killer Moncada seized a Joseph Garreffa turnover at the Battalion blue line and raced in on Cranley but was pulled down by Quinn. Referee Ryan Harrison awarded the penalty shot at 10:02, and Moncada beat Cranley with a backhand deke for his league-leading seventh shorthanded goal. Moncada’s nine career shorthanded goals are tied with Wojtek Wolski and Brett McKenzie for the third most in franchise history.

Christopoulos and Denault scored early third-period goals 13 seconds apart to give the Troops a 5-2 lead.

Liam Arnsby made a strong move to the net off the left wing and dished the puck across the crease to Christopoulos, who eluded Teddy Sawyer to beat Cranley at 1:18. Christian Stevens then forced Merrick Rippon to turn over the puck to Denault, who drilled the disc home from the right circle.

The Battalion embarked on an eight-minute power play after Rippon was assessed two majors, one for checking from behind for a dangerous hit on Mitchell Russell and the other for fighting, as well as two game misconducts, after engaging Brandon Coe, who received a roughing minor, at 1:57. The Troops were unable to take advantage of the extended man advantage, which ended up being six minutes after Pacey Schlueting was called for holding.

Cranley went to the bench for a sixth skater with 3:24 left to play, and Moncada ripped the puck emphatically into the empty net at 17:52. Arnsby had the lone assist on Moncada’s team-leading 32nd goal.

The Battalion plays host to the Saginaw Spirit at 2 p.m. Sunday on I Stop, You Stop Bus Safety Day.

BATTALION BULLETS: It was Talk Today Night, presented by Teachers Life in support of the Canadian Mental Health Association, which works with OHL clubs to address players’ mental health. The CMHA distributed PopSocket cell phone grips and stress balls in the shape of hockey pucks, and fans entered a draw for a Battalion replica game sweater … It was the third of the teams’ four games, after Ottawa won the first two at home by 6-1 and 9-1 scores, the latter on Feb. 9. The final meeting is March 8 at North Bay … Russell went to the dressing room after the hit by Rippon and didn’t return … Moncada has a 10-game points streak in which he has eight goals and eight assists for 16 points, the longest such run by a Battalion player this season. In 227 career games, including 190 with the Troops, he has 49 goals and 52 assists for 101 points … North Bay went 1-for-6 on the power play. Ottawa was 0-for-3 … The Battalion was without Paul Christopoulos, Avery Winslow, Mason Primeau and Braden Henderson … Christopoulos completed a two-game suspension handed down after he received a match penalty for slew-footing and a game misconduct in a 4-0 road win last Saturday night over the Barrie Colts … Rossi’s assist made him the first OHL player to reach the 100-point plateau this season, with 33 goals and 67 assists in 47 games … Quincy Evans was the other referee.