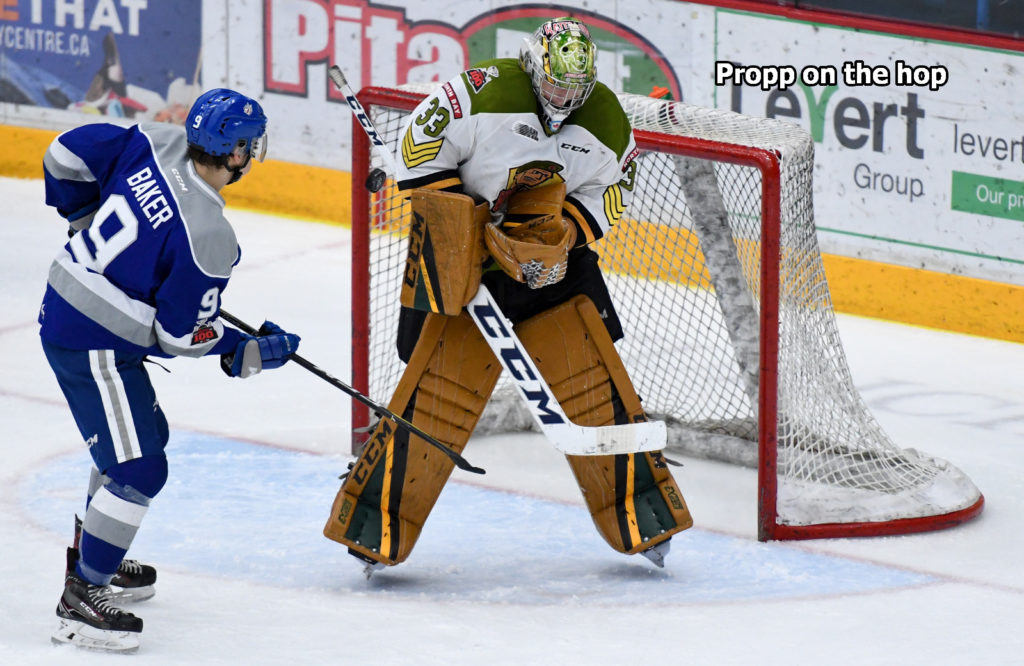 SUDBURY, Ont. — Justin Brazeau scored one goal and had an assist to pace the North Bay Battalion to a 4-1 Ontario Hockey League victory Friday night over the Sudbury Wolves, giving the Troops a split of the teams’ home-and-home series.

Luke Burghardt, Jake Henderson and Luke Moncada also scored and Jesse Saban contributed three assists in the penalty-filled game for North Bay, which improved its won-lost-extended record to 29-26-10 for 68 points, third in the Central Division and sixth in the Eastern Conference. Goaltender Christian Propp faced 31 shots in avenging a 4-2 loss Thursday night.

Alexey Lipanov scored for Sudbury, 16-39-9 for 41 points, last in the division, conference and league. Goaltender Jake McGrath made 32 saves before 3,379 at the Sudbury Community Arena.

“We had a good bounce-back after yesterday,” said Brazeau. “We played a bad first two periods last night but turned it on in the third, and we carried that over into tonight. It was good for us to get the two points here.”

The Battalion moved two points behind the idle Niagara IceDogs in the division and conference and four points ahead of the Ottawa 67’s, who lost 7-2 to the host Kingston Frontenacs, in the conference. Niagara and Ottawa both have two games in hand on the Troops, who have three games left.

The Battalion struck for two power-play goals in the first period, starting with Burghardt’s tally at 5:09. McGrath couldn’t contain Saban’s drive from the left point, and Brazeau sent the rebound through the crease to Burghardt, who scooped the puck into an open net from the right side. It was Burghardt’s 27th goal of the season.

Brazeau connected for what proved to be the winner on a two-man advantage at 14:12, deftly deflecting an Adam Thilander shot-pass inside the left post for a team-leading 39th goal. Saban had the second assist.

The Wolves were outshot 15-10 in the period, with their best scoring chances coming in the 17th minute when Drake Pilon and Kirill Nizhnikov swatted at the rebound of a Peter Stratis shot.

Henderson made it 3-0 at 11:55 of the second period. Simon Rose, who earned his first OHL point with the assist, fired a left-point shot that Rhys Forhan touched in the goalmouth before Henderson put the puck high over McGrath’s glove. It was Henderson’s 11th goal and fifth since joining the Troops in a Jan. 9 trade from the Kitchener Rangers.

Lipanov replied on the power play at 18:45 when he one-timed a pass from Blake Murray on the end boards over Propp’s glove from the left-wing circle.

In the third period, Emmett Serensits’s ill-timed leap for the puck let Moncada and Brad Chenier race in alone on McGrath, with Moncada finishing the play with his ninth goal at 5:35. Saban also earned an assist.

The Battalion opens a three-game road trip at 7:05 p.m. Thursday against the Peterborough Petes. The game can be seen live in North Bay on YourTV Channels 12 and 700 and heard on Country 600 CKAT.