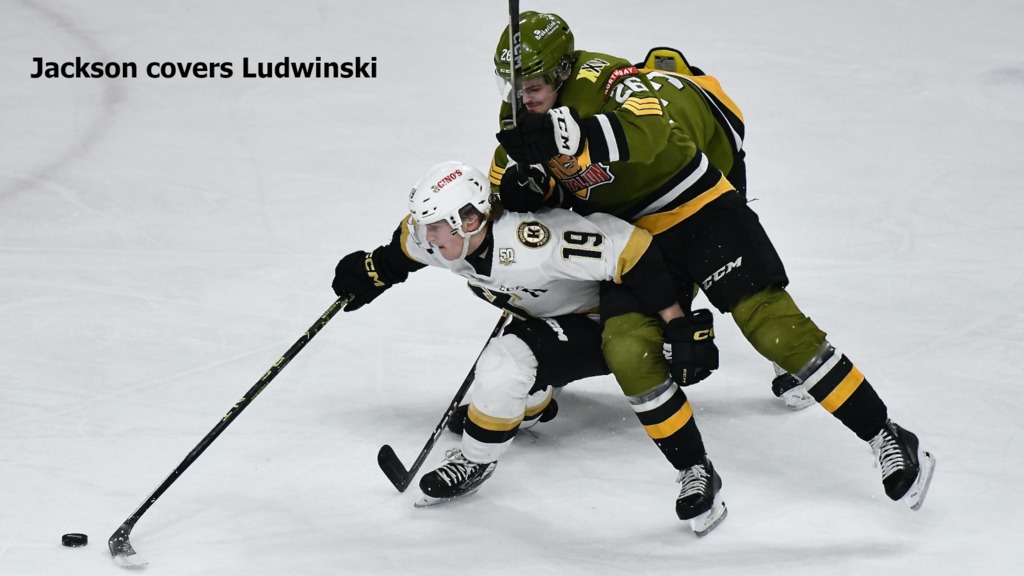 KINGSTON, Ont. — Josh Bloom scored three goals, including the winner and an empty-netter, to pace the North Bay Battalion to a 4-2 Ontario Hockey League victory Friday night over the Kingston Frontenacs.

Kyle Jackson had one goal and one assist for North Bay, which improved its won-lost-extended record to 17-8-0 for 34 points, first in the Central Division.

Gabriel Frasca scored both Kingston goals as goaltender Ivan Zhigalov contributed 37 saves before a Leon’s Centre crowd of 3,892. The Frontenacs are 12-11-2 for 26 points, third in the East Division.

Kingston finished the game down two players, the first being Owen Outwater, a former member of the Battalion, who went to the dressing room after a first-period check appearing to have suffered an injury to a shoulder or collarbone.

A bleeding Maleek McGowan then was taken to hospital for what looked to be a gash to his left forearm from the skate of the Troops’ Paul Christopoulos in a collision early in the final frame. McGowan left for the dressing room immediately under his own power, but the game was delayed 11 minutes.

Trailing 3-1 through 40 minutes, Kingston pulled within a goal 30 seconds into the third period when rookie Frasca netted his fourth of the season off a rush. The Battalion then fended off the Frontenacs the rest of the way, forging a 20-5 edge in shots in the stanza, as Bloom put his 13th goal of the campaign and sixth since a trade from the Saginaw Spirit into the vacant net at 19:58.

Jackson scored his team-leading 15th goal at 11:05, working off the right wing to the slot and beating Zhigalov over his glove to the far post. Justin Ertel drew the lone assist.

Bloom put the puck over the falling Zhigalov from the slot on the power play at 12:57 for what proved to be the winning goal, with assists to Matvey Petrov and Ty Nelson.

Frasca redirected a right-point power-play shot by Francesco Arcuri at 17:40, precipitating a flood of plush toys in the Teddy Bear Toss, with their removal holding up the game for seven minutes.

The first period saw DiVincentiis make a solid stop against Christopher Thibodeau on the power play after Nelson went off for a dive-induced tripping call at 3:23 and deny Jacob Battaglia in tight on the left side in the ninth minute. Zhigalov foiled Nikita Tarasevich on a good chance soon afterwards.

Brayden Hislop got back to cover Kingston’s Mitchell Brooks on a 14th-minute breakaway, and DiVincentiis countered a Battaglia attempt in the 15th.

The Battalion visits the Peterborough Petes at 7:05 p.m. Saturday to complete the trip and a string of five road dates. The game can be seen live in North Bay on YourTV Channels 12 and 700.