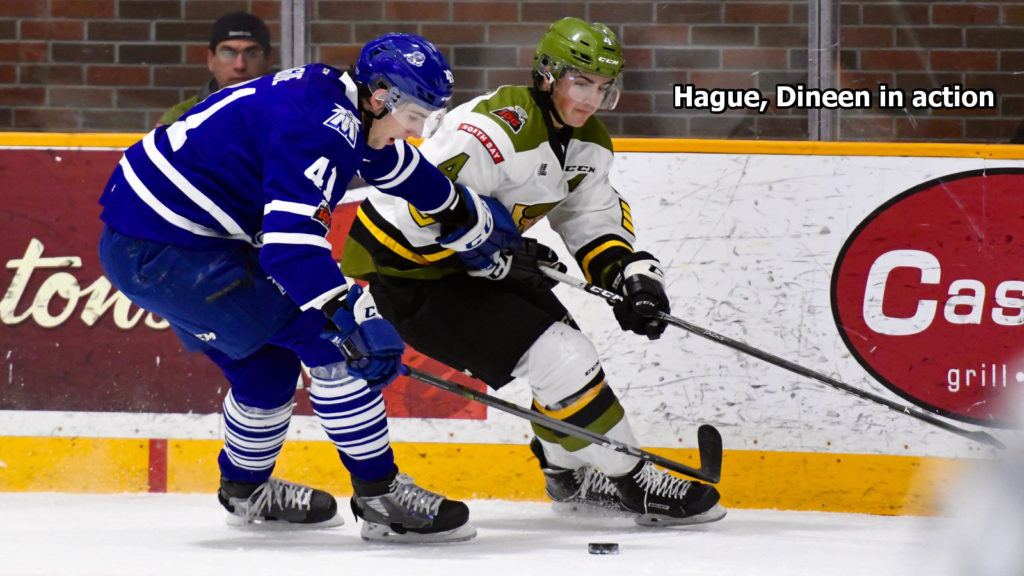 NORTH BAY, Ont. — Justin Brazeau scored two goals, including the winner, and assisted on another to pace the North Bay Battalion to a 4-3 victory Thursday night over the Mississauga Steelheads, vaulting the Troops into third place in the Ontario Hockey League’s Central Division.

Cam Dineen provided one goal and one assist and Andy Baker the other goal for North Bay, which moved its won-lost-extended record to 10-15-4 for 24 points, one more than Mississauga and the Sudbury Wolves, who lost 5-4 in overtime to the host Peterborough Petes. Battalion goaltender Christian Propp made 28 saves.

Owen Tippett, Jacob Moverare and Nicolas Hague scored for Mississauga, which led 2-0 before suffering a seventh consecutive loss. The Steelheads, 11-17-1, last won Nov. 19 in a 3-1 decision over the visiting Niagara IceDogs that completed a stretch of nine wins in 11 games. Goaltender Jacob Ingham faced 29 shots.

“I was real happy with our push in the third period,” said Battalion coach Stan Butler. “I mean, obviously, we know they’re a really good team. They went to the OHL final last year with a lot of the same guys.”

“I thought he was real good tonight. He’s very consistent. He’s square to the puck. He’s a big body. We were very happy with his game tonight.”

Baker started the Battalion comeback with a power-play goal at 16:13 of the second period, chopping the puck behind Ingham from the right edge of the crease. Stephen Gibson flicked the puck out of the net with his stick, but video review confirmed that the disc had completely crossed the line for Baker’s fifth goal of the season. Riley Bruce and Dineen drew assists.

Brazeau tied it 26 seconds into the third period, slipping past Hague to take a pass from Luke Burghardt and moving in on Ingham to beat him with a backhander to the blocker side.

Dineen capitalized on a two-man advantage at 8:51 after Merrick Rippon was called for tripping and Trent Fox went off for a faceoff violation. Defenceman Dineen scored his eighth goal through traffic from above the left-wing circle, with assists going to Brazeau and Adam Thilander.

Brazeau gave the Troops a 4-2 lead with the man advantage at 16:05 after Brett McKenzie won a faceoff in the left circle. Brazeau seized the puck, stepped toward the middle and snapped home his team-leading 20th goal.

With Ingham gone for a sixth skater, defenceman Hague, with his team-high 17th goal, pulled Mississauga within one at 18:41, connecting from the top of the right circle off a cross-zone pass from Albert Michnac, but the Battalion fended off further attacks.

After a lacklustre first period in which each team had just five shots, Tippett opened the scoring at 8:05 of the second frame off a turnover at the North Bay blue line, and rearguard Moverare struck at 13:55 from high on the left wing as Fox screened Propp.

The Battalion visits the Sault Ste. Marie Greyhounds at 7:07 p.m. Friday. The game can be seen live in North Bay on YourTV Channels 12 and 700 and heard on Country 600 CKAT.

BATTALION BULLETS: Butler was credited with his 682nd OHL win, eclipsing Larry Mavety for sole possession of fourth place on the all-time list. Butler has a won-lost-tied record of 682-706-65 in 1,453 games with the Oshawa Generals and Battalion. In 1,321 games with the Troops, his record is 612-657-52. The retired Brian Kilrea holds the record with 1,194 wins, followed by the late Bert Templeton at 907 and Dale Hunter of the London Knights at 700 … Attendance at Memorial Gardens was 2,135, the lowest since the Battalion moved to North Bay from Brampton in 2013 … The game was the second of six between the teams, after a 7-1 home-ice win by Mississauga on Oct. 20. The next meeting is at North Bay on Dec. 31 … In 126 career games, Dineen has 27 goals and 73 assists for 100 points … The Battalion went 3-for-5 on the power play. Mississauga was 0-for-3 … The Battalion was without Eric Allair, Simon Rose, Rhys Forhan and Daniel Walker … Travis Mailhot made his Battalion home-ice debut … Hague has a four-game points streak in which he has four goals and two assists for six points … The referees were Mike Hamilton and Mike Marley … The Battalion will hold a used equipment sale outside the team dressing room near Gate 4 from 11:30 a.m. to 1:30 p.m. on Saturday. Gloves, helmets, pants and other items will be available in limited quantities. Terms are cash only.