Brazeau named Player of the Week 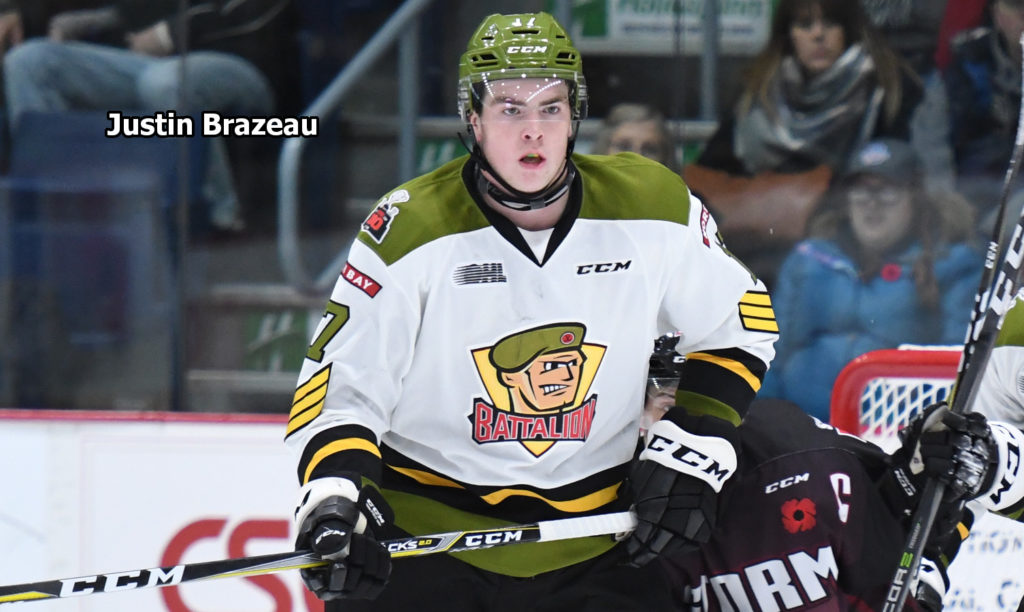 NORTH BAY, Ont. — Justin Brazeau of the North Bay Battalion has been named the Player of the Week for the period ended Sunday, the Ontario Hockey League announced Monday.

Brazeau scored three goals, including the winner, and added an assist in a 5-2 victory Sunday over the visiting Barrie Colts to record his first three-goal game in the OHL. He assisted on the lone Battalion goal in a 3-1 road loss Friday night to the Sault Ste. Marie Greyhounds after scoring two goals, including the winner, and earning one assist in a 4-3 home-ice verdict Thursday night over the Mississauga Steelheads.

“It feels great to be recognized for the week I had and, for it to come during a week where our team was able to win games we needed to win, it feels even better,” said Brazeau, a 19-year-old in his third season with the Battalion.

Brazeau, a six-foot-five, 221-pound native of New Liskeard, Ont., leads the Battalion in scoring with 23 goals and 13 assists for 36 points in 31 games with just 10 minutes in penalties. His goals total is third in the league.

A 13th-round pick in the 2014 OHL Priority Selection from the New Liskeard Cubs midgets, he’s registered 51 goals and 35 assists for 86 points in 163 career games. His 23 goals this season are a career high, surpassing by one his total from 2016-17.

Brazeau is the fifth member of the Battalion to earn the league honour since the franchise moved to North Bay from Brampton in 2013.