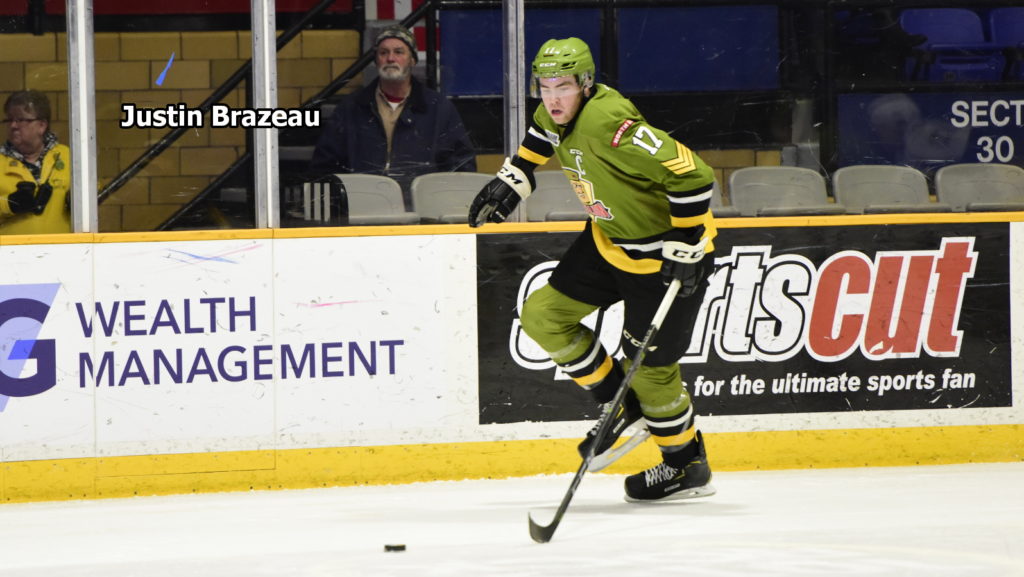 NORTH BAY, Ont. — Justin Brazeau of the North Bay Battalion is the 2018-19 winner of the Leo Lalonde Memorial Trophy as the Ontario Hockey League’s Overage Player of the Year, it was announced Tuesday.

Right winger Brazeau, the first Battalion player to receive the award, scored a franchise-record 61 goals in his 20-year-old season and earned 52 assists for 113 points in 68 games, finishing second in the OHL scoring race.

“It’s always a great feeling anytime you are recognized by the league for your personal accomplishments,” Brazeau said from his home town of New Liskeard, Ont.

“I enjoyed my four years in North Bay and couldn’t have asked for anything more, so to be able to finish it off with this award, especially with the group of overage players we had in the league this year, is definitely a great feeling.”

Stan Butler, the Battalion’s director of hockey operations and head coach, put Brazeau “in the top echelon” of stars in the franchise’s 21-year history.

“I think it’s a great thing for a late-round draft pick to show people that, if you focus and work hard and develop, anything can be achieved in the OHL. It’s a credit to him that he improved every year and got to be considered for this award.”

“Coming from a small town, Justin gives players a lot of hope, especially others from Northern Ontario.”

Captain Brazeau, who captured the Jim Mahon Memorial Trophy as the OHL’s top-scoring right winger, was a 13th-round pick in the 2014 OHL Priority Selection from the New Liskeard Cubs minor midgets.

In 268 career games, he scored 128 goals and added 110 assists for 238 points, the most by a Battalion player since relocation from Brampton in 2013. He ranks third in franchise history in points, behind Wojtek Wolski and Cody Hodgson, and second in goals and is tied for seventh place in assists. He is eighth in games played.

Brazeau produced 33 multi-point games, including five three-goal games. He was named one of the three stars 23 times, with 11 first-star honours, tied for second most in the league. He was the only Eastern Conference player to finish in the top three in four categories of the Coaches Poll, winning the voting for most dangerous in the goal area, taking second place in balloting for best shot and third place in voting for both smartest player and best shootout shooter.

The overage award winner is selected by OHL general managers. The trophy, first presented in 1984, was donated by the league’s trainers in memory of Leo Lalonde, onetime chief scout for OHL central scouting and the Belleville Bulls and also a scout with the Peterborough Petes.

Each club submitted a nominee, and general managers couldn’t vote for their own players. With points allotted on a 5-3-1 basis, Brazeau received 83 of a possible 95 points, followed by right winger Tye Felhaber of the Ottawa 67’s with 44 points and defenceman Mac Hollowell of the Sault Ste. Marie Greyhounds with 27.

The award went to members of the North Bay Centennials three times, the winners being Len Soccio in 1988, John Spoltore in 1992 and B.J MacPherson in 1994.  The recipient last year was Aaron Luchuk of the Barrie Colts.

Brazeau is to be formally presented with the trophy at the OHL awards ceremony June 5 at the Hockey Hall of Fame in Toronto.