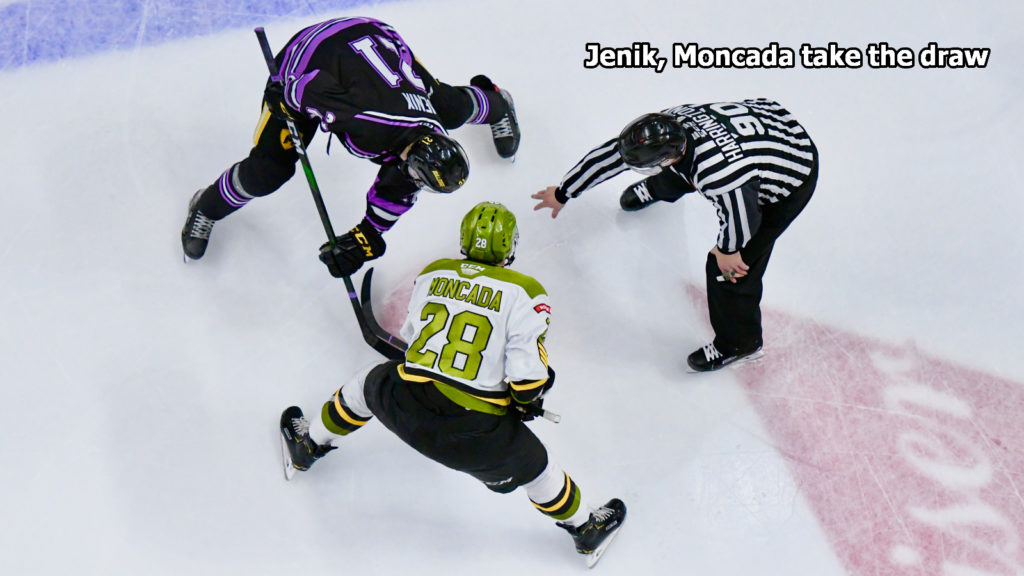 Kaliyev, with 27 goals and 22 assists, and Jenik, with 19 goals and 30 assists, have 49 points apiece, tied for second place in the OHL scoring race behind Connor McMichael of the London Knights.

Roy recorded his first shutout of the season before 2,715 at FirstOntario Centre. A Callander resident, he was a fourth-round pick in the 2017 OHL Priority Selection from the Toronto Nationals minor midgets.

Goaltender Joe Vrbetic faced 27 shots for North Bay, 4-19-0 for eight points, fifth in the Central Division. The Battalion, which dressed 17 skaters, one below the limit, was shut out for the first time since a 3-0 setback Sept. 20 to the visiting Barrie Colts in the season opener.

The Troops, who lost 4-3 Thursday night at home to the Oshawa Generals, wore white uniforms as the Bulldogs sported custom sweaters and socks as part of the Hockey Fights Cancer campaign.

Hamilton, which led 2-0 after 40 minutes, got a goal from Morrison at 2:17 of the third period when he tucked the puck inside the left post on a rebound off the end boards.

The Battalion, despite a two-man advantage lasting 26 seconds, failed to cut into the three-goal deficit before Vrbetic left for an extra attacker and Kaliyev sailed his league-leading 27th goal of the season into the vacant cage at 18:53.

Landry opened the scoring on the power play at 10:19 of the first period as Josh Currie served a weak goaltender interference call. Kaliyev put the puck off the end boards around the net, and defenceman Landry knocked it into the gaping left side.

Penalty killer Jenik gave Vrbetic trouble with Kaliyev serving a subsequent goaltender interference minor, spinning in the goalmouth on a rush and forcing the goaltender to scramble to track the puck. Vrbetic also made a good stop on Tag Bertuzzi five minutes into the frame, and Roy got his glove on a screened right-point drive by Nick Grima at 19:22.

Kaliyev struck at 8:18 of the second period, tapping the puck home from the left lip of the crease off a three-on-one rush with Liam Van Loon and Jenik against Paul Christopoulos.

Simon Rose sent Cameron Peters off on a breakaway in the fifth minute, but Roy parried the shot with his blocker. Peters put the puck through the crease for Currie in the eighth minute, but Currie couldn’t get his stick on the disc at the right side.

Ryan Thompson and Hamilton’s Navrin Mutter staged a slugfest at 15:18, with each drawing a fighting major.

The Battalion plays host to the Niagara IceDogs at 2 p.m. Sunday in its last home game until Dec. 8.

BATTALION BULLETS: It was the second of four games between the teams. The Bulldogs won 5-1 at Memorial Gardens on Nov. 14. The next meeting is Dec. 28 at Hamilton … The Battalion’s Brad Chenier saw the end of a seven-game points streak during which he had seven goals and three assists for 10 points, while Brandon Coe’s five-game points streak, in which he produced three goals and five assists for eight points, also ended … North Bay went 0-for-5 on the power play. Hamilton was 1-for-4 … Opening lines for the Battalion, which dressed 10 forwards and seven defencemen, featured Luke Moncada centring left winger Chenier and right winger Coe, Matthew Struthers pivoting left winger Kyle Jackson and Liam Arnsby on right wing and Peters centring left winger Harrison Caines and right winger Alex Christopoulos. Left winger Currie was the other forward … The Battalion was without Niki Korpialho, Mitchell Russell and Mason Primeau, who reported that he wasn’t feeling well and didn’t make the trip … Paul Christopoulos returned from a two-game suspension for putting the puck into the seats Nov. 14 … Jenik has a 22-game points streak, covering his entire season … The referees were Jesse Wilmot and Len Wood … The Oshawa game, on My Team Cares Night presented by Enercare in support of the North Bay Food Bank, saw more than $1,248 and 559 pounds of food collected.