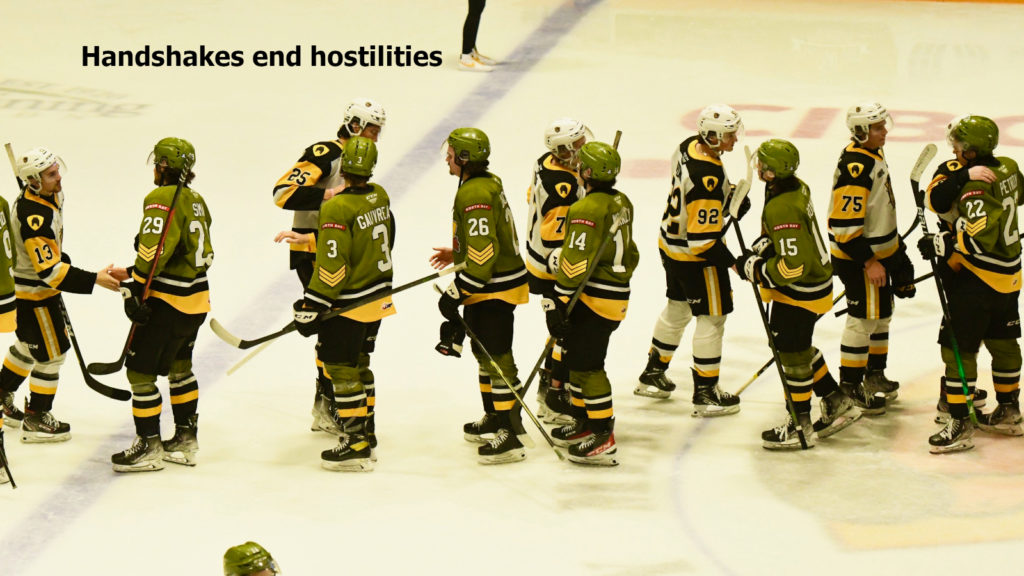 NORTH BAY, Ont. — The Hamilton Bulldogs are off to the Ontario Hockey League Championship Series after completing a sweep of the North Bay Battalion in the Eastern Conference final with a 6-0 victory Friday night.

Jan Mysak scored his first three goals of the playoffs and Avery Hayes added a penalty-shot goal and an assist, while Arber Xhekaj and George Diaco contributed a goal apiece. Goaltender Marco Costantini made 18 saves for his second shutout of the series and third of the postseason.

Hamilton, which took the best-of-seven series for the Bobby Orr Trophy in the minimum four games, outscoring the Battalion 22-6 in the process, will face the winner of the Western Conference Championship Series for the OHL title. The Windsor Spitfires and Flint Firebirds are tied at two wins each after Windsor’s 4-2 road victory Friday night.

The Bulldogs posted their third straight sweep, after eliminating the Peterborough Petes and Mississauga Steelheads, and boast a won-lost record of 12-0 in the postseason.

Goaltender Dom DiVincentiis faced 32 shots for North Bay before a crowd of 3,002. The Central Division champions finished ahead of everybody in their conference except Hamilton of the East Division. The Bulldogs had the OHL’s best regular-season record at 51-12-5 for 107 points.

“Obviously, this series didn’t go as planned and really how we wanted it to go, but we really can’t have this put a cloud on what a spectacular season we had,” said Battalion coach Ryan Oulahen. “I’m so proud of this group of guys that literally every single day has done everything we’ve asked of them.”

Mysak opened the scoring at 2:53 of the first period after Patrick Thomas darted down the right wing behind the net and backhanded the puck out front. Gavin White also had an assist.

Defenceman Xhekaj struck on the power play for his fifth goal of the playoffs at 7:40, hammering the puck from the top of the umbrella on assists by Logan Morrison and Mason McTavish. It came 30 seconds after a would-be Hamilton goal went to review and was disallowed because of an offside zone entry.

The Bulldogs forged a 15-7 edge in shots in the frame, inflated by a strong start and their two power plays to the Troops’ one, as Hamilton appeared to enjoy free rein on cheap plays while Brandon Coe was handed a slashing call that sparked the crowd to protest loudly.

Mysak made it 3-0 at 1:41 of the middle period, cashing a pass from behind the goal line from Mark Duarte. Thomas earned his second assist.

Hayes was impeded by Tnias Mathurin on a breakaway at 11:40 and was awarded the penalty shot. Hayes, who had six goals and six assists for 12 points in the series, scored the first postseason penalty-shot goal the Battalion has ever allowed.

The Troops’ Matvey Petrov drove to the net and Ty Nelson arrived for a followup attempt at 3:32, and Liam Arnsby was denied on a pointblank drive against Costantini at 7:35. Anthony Romani got loose in the goalmouth but pitched the puck wide with the Hamilton goaltender prone on the ice in the 19th minute.

Mysak, assisted by Hayes and Morrison, added the fifth goal at 17:17 of the third period, and Diaco completed the scoring from Lawson Sherk and Ryan Humphrey at 19:35.

BATTALION BULLETS: The Battalion has an all-time won-lost mark of 17-19 in playoff series, including 8-6 since relocation from Brampton in 2013 … The Troops are 84-100 in playoff games, including 37-31 as North Bay. The club is 20-14 at Memorial Gardens … The Battalion is 14-22 in the fourth game of a playoff series, including 6-14 at home. The Troops are 2-6 at home in such games since 2013 … Coe couldn’t quite handle a breakaway pass after exiting the penalty box in the second minute of the middle period … North Bay went 0-for-3 on the power play. Hamilton was 1-for-3 … Mysak topped Hamilton with seven shots on goal, while seven Battalion members had two shots apiece … The Battalion, which dressed 11 forwards and seven defencemen, again scratched Wyatt Kennedy, Owen Outwater and Mitchell Russell … Hamilton scratches included Brenden Anderson and Nathan Staios … A resident of Westland, Mich., Hayes was a sixth-round choice in the 2018 OHL Priority Selection from the Detroit HoneyBaked 16U team … Morrison has a 12-game points streak in which he has 13 goals and as many assists for 26 points … Hamilton’s Ryan Winterton saw the end of an 11-game points streak during which he had five goals and 11 assists for 16 points … McTavish has a 10-game points streak in which he has nine goals and eight assists for 17 points … Jason Faist and Dave Lewis were the referees.