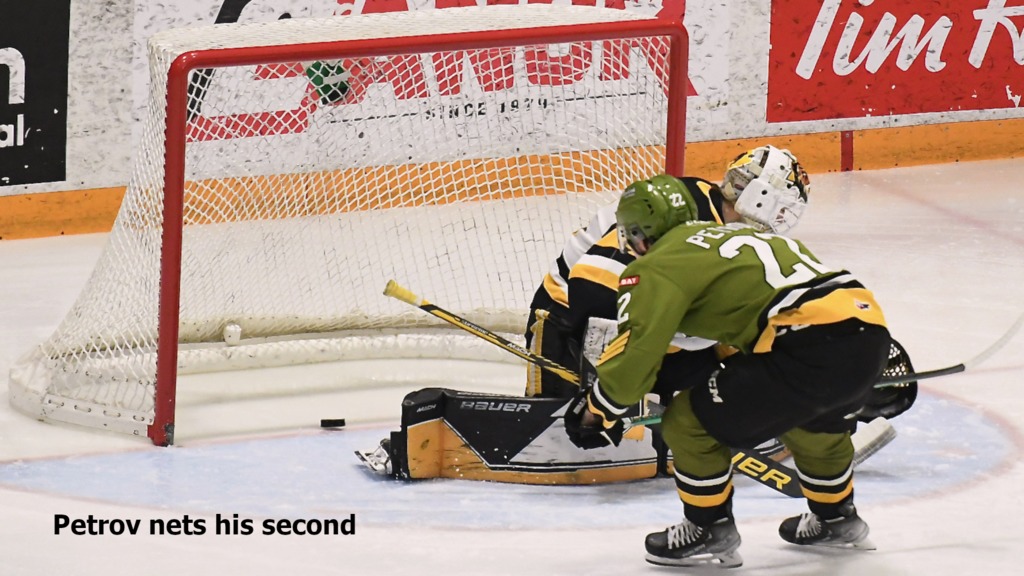 Patrick Thomas and Nick Lardis joined Donovan in providing one goal and one assist, while Cole Brown also scored. Goaltender Tristan Malboeuf made 35 saves for Hamilton, which posted a third straight victory, all on the road, and has a won-lost-extended record of 18-18-4 for 40 points, tied with the Kingston Frontenacs for third place in the East Division.

Matvey Petrov scored all three goals for North Bay, which saw a nine-game home winning streak snapped and is 29-10-2 for 60 points, first in the Central Division. Goaltender Dom DiVincentiis made 32 saves before a crowd of 2,277.

Donovan rifled the winner home from the right-wing circle after Sahil Panwar, with his third assist, grabbed a turnover to DiVincentiis’s left. It was defenceman Donovan’s ninth goal of the season.

Petrov precipitated overtime with a power-play goal at 15:59 of the third period, driving to the net and chipping a Kyle Jackson shot high over Malboeuf’s glove. Kyle McDonald also assisted on Petrov’s 18th goal.

Petrov gave the Battalion a 2-1 lead at 3:25 of the frame, taking a pass from Jacob Therrien at centre ice and blowing past Cedricson Okitundu for a breakaway tally between Malboeuf’s legs. Ty Nelson had the other assist.

Brown scored his seventh goal on a backhanded steer from the left side at 8:10 to tie it, and Lardis put Hamilton in front at 10:36 off a right-wing faceoff. Donovan and Thomas assisted on Lardis’s 18th goal, his sixth in six games since a Jan. 7 trade from the Peterborough Petes.

The game was scoreless for more than 35 minutes before the teams swapped goals 25 seconds apart in the second period, with Thomas giving Hamilton the lead at 15:48. Lardis had the only assist as Thomas, behind the goal line, chopped at the puck at the left lip of the crease and was rewarded with his team-leading 13th goal.

Petrov replied at 16:13 after Nikita Tarasevich gained possession of the puck along the end boards behind the net and fed it in front. Petrov converted from the left hash mark.

The Troops had an apparent goal disallowed upon video review when it was determined they were offside on the zone entry before Avery Winslow connected at 1:21.

DiVincentiis made a big stop against Panwar, who got past Nelson, on a breakaway at 7:28, and Josh Bloom arrived at Malboeuf’s doorstep to give him trouble handling the rebound of a dump-in that got into the crease at 14:34.

The Battalion outshot Hamilton 12-9 in the first period, killing the only penalty, to Owen Van Steensel for hooking at 16:00.

Dalyn Wakely, set up by Justin Ertel, shoveled the puck wide of Malboeuf’s net in the fourth minute before Tarasevich did similar after a rush by Petrov and Pasquale Zito in the sixth. DiVincentiis denied Thomas in alone in the eighth minute, and Petrov struck iron in the 10th.

The Battalion visits the Mississauga Steelheads at 7 p.m. Friday. The game can be seen live in North Bay on YourTV Channels 12 and 700.

BATTALION BULLETS: On Bell Let’s Talk Night, the first 2,000 fans received a toque. Other prizes, including a JBL Bluetooth speaker, wireless ear buds and a cooler bag, were awarded … It was the third of four meetings between the teams after they split two games at Hamilton. The Battalion won 5-1 on Nov. 4, and the hosts prevailed 4-1 on Nov. 25. The season series ends March 23 at North Bay … Ryan Oulahen has served as the Battalion’s head coach for 143 regular-season games, the same number in which he coached the Flint Firebirds for two-plus seasons culminating in 2018-19. Starting with a 4-3 win over the visiting Erie Otters on Dec. 12, 2019, Oulahen is 84-46-13 with the Troops for a points percentage of .633 after going 52-78-13 with Flint for a .409 percentage … In 103 games, Petrov has 58 goals and 89 assists for 147 points, one more than Chris Rowan and 20th in franchise history. Jackson, with 64 goals and 79 assists for 143 points in 160 games, is tied with Luch Aquino and Mitchell Russell for 22nd all-time … The Battalion went 1-for-1 on the power play. Hamilton was 0-for-1 … The Battalion scratched Tnias Mathurin, Brayden Turley, Liam Arnsby, Luc Brzustowski and Brett Bouchard, who turned 18 on Wednesday … Hamilton’s Masen Wray, a third-rounder in the 2022 OHL Priority Selection from the North Bay Trappers U16s, is a son of Battalion assistant coach Scott Wray.