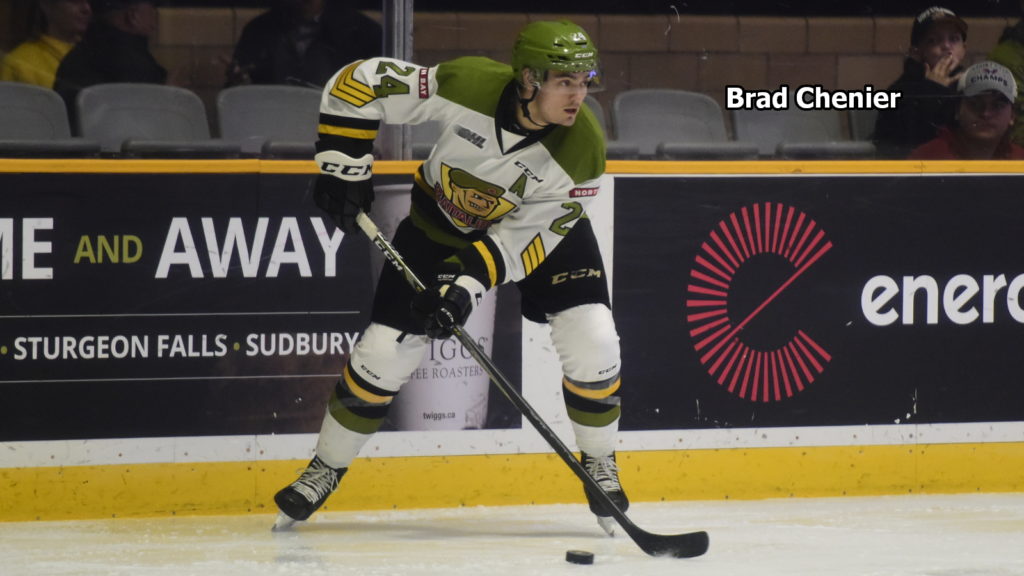 Chenier, a 20-year-old native of Kitchener and resident of Hanmer, Ont., succeeds right winger Justin Brazeau to become the sixth captain in the Battalion’s North Bay history. Barclay Goodrow, who also filled the role in the club’s 15th and final season in Brampton, was the first, in 2013-14, followed by Marcus McIvor, Mike Amadio and Riley Bruce.

“He’s a guy who’s played four years for this team and he’s worked hard to get where he is,” Stan Butler, the Battalion’s director of hockey operations and head coach, said of Chenier, who was an alternate in 2018-19.

“He’s a good leader because he had to work hard to get this good.”

Chenier, six feet and 186 pounds, scored 30 goals and earned 35 assists for 65 points in 61 games last season, finishing third in team scoring behind Brazeau and Struthers. A fourth-round pick in the 2015 OHL Priority Selection from the Sudbury Wolves minor midgets, he has 54 goals and 58 assists for 112 points in 204 career games.

Struthers, who turns 20 on Dec. 26, netted 31 goals and earned 50 assists for 81 points in 61 games last season, when he served as an alternate. He was acquired in a trade Jan. 3, 2018, from the Owen Sound Attack, who had made him a third-round selection in 2015 from the Halton Hurricanes minor midgets.

Primeau, an 18-year-old resident of Toronto, scored 10 goals and added 16 assists for 26 points in 49 games last season after a Nov. 15 trade with the Guelph Storm. In 129 OHL games since Guelph made him a second-round pick in 2017 from the Toronto Nationals minor midgets, the six-foot-six 210-pounder has 20 goals and 26 assists for 46 points.

Moncada, a Toronto resident who turned 19 on May 29, was a third-round choice by Guelph in 2016 from the Toronto Red Wings minor midgets. The Battalion acquired the six-foot-one 212-pounder in a trade June 27, 2017. Moncada, who scored eight goals and had nine assists for 17 points in 68 games last season, has OHL career totals of 172 games, 17 goals, 29 assists and 46 points.

The Battalion opens the regular season at 7 p.m. Friday against the visiting Barrie Colts.