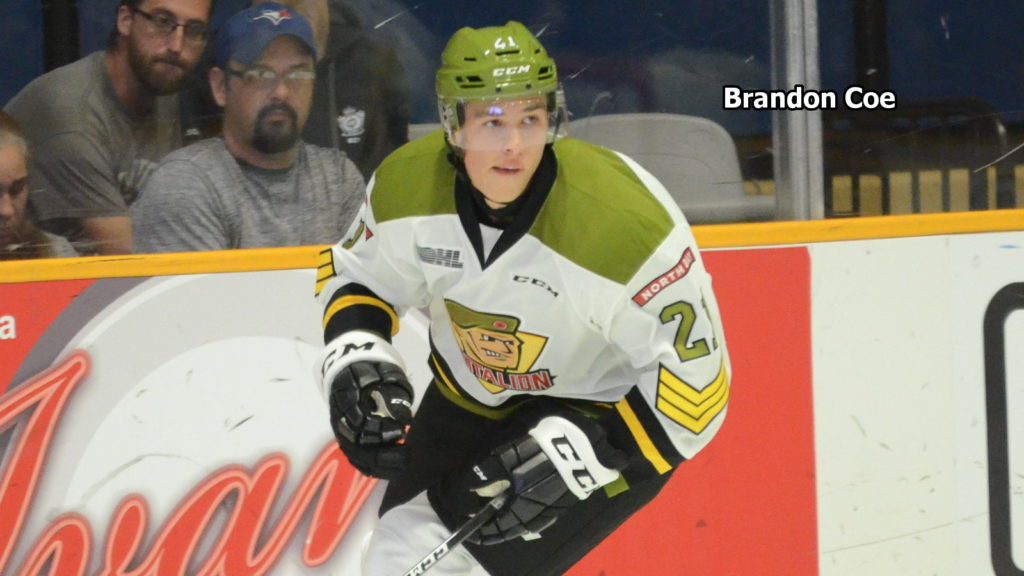 NORTH BAY, Ont. – The final days of June demonstrate that one season blends seamlessly into the next for Ontario Hockey League players and clubs.

Right winger Brandon Coe of the North Bay Battalion is one of 14 OHL skaters and goaltenders invited to the selection camp for the Canadian men’s summer under-18 team to be held at Calgary in late July.

Stan Butler, Battalion director of hockey operations and head coach, is preparing for the Canadian Hockey League Import Draft on Thursday, and five Troops have received invitations to National Hockey League development camps, some of which already have started.

The summer under-18 team will represent Canada in the Hlinka Gretzky Cup tournament at Edmonton and Red Deer, Alta., in August. A total of 44 prospects from the CHL and the Canadian Junior Hockey League, numbering 26 forwards, 14 defencemen and four goaltenders, are to compete for a spot on the roster.

Coe, North Bay’s first-round pick, third overall, in the 2017 OHL Priority Selection from the Toronto Nationals minor midgets, scored 10 goals and added 13 assists for 23 points in 63 games as an OHL rookie last season. The six-foot-three, 182-pound resident of Ajax, Ont., was the youngest player in the league, turning 16 on Dec. 1.

He earned a silver medal with Canada Red at the 2017 World Under-17 Hockey Challenge at Dawson Creek and Fort St. John, B.C., scoring one goal and adding three assists for four points in five games.

“Unlike our other summer camps, these players are part of a selection process from the moment they arrive, and the opportunity is to represent Canada on the world’s stage,” Scott Salmond, Hockey Canada’s vice-president of hockey operations and national teams, said in a news release.

The tourney, which previously has been played in the Czech Republic and Slovakia, has been renamed from the Ivan Hlinka Memorial Tournament. Canada won it last year at Breclav, Czech Republic, defeating the hosts 4-1 with a squad that included 18 players who were selected in the NHL Draft last weekend. Seventy-seven who played in the event were selected by NHL clubs, 19 in the first round and accounting for seven of the top 10 picks.

Canada has captured gold 21 times in 27 years of summer under-18 competition, including in 2015 when Butler was Canada’s head coach. Former Battalion captain and assistant coach Ryan Oulahen, now bench boss of the Flint Firebirds, is an assistant on the Canadian staff this year.

The Battalion has the 27th and 87th selections in the CHL Import Draft, conducted among the OHL, Quebec Major Junior Hockey League and Western Hockey League but, with some clubs having full two-man import quotas and being set to pass, the Troops figure to exercise the 22nd and 64th picks.

North Bay had one import in 2017-18 in Swedish defenceman Adam Thilander, who will play in his native country next season as a 20-year-old. Czech centre Filip Chytil, who was selected by the NHL’s New York Rangers days before the 2017 CHL Import Draft, spent the season with them and the affiliated Hartford Wolf Pack of the American Hockey League and never was assigned to the Battalion.

The 60 CHL clubs are to draft via the Internet in inverse order of each league’s regular-season standing starting at 11 a.m., with non-playoff teams taking precedence. The order of selection among the three leagues changes from year to year.

For the fourth time in its 20-year history, the Battalion didn’t have anyone selected in the NHL Draft, which was conducted last Friday night and Saturday at Dallas, but three free-agent skaters and two goaltenders received invitations to development camps.

Right winger Justin Brazeau got the nod from the San Jose Sharks, left winger Luke Burghardt from the Vegas Golden Knights and centre Matthew Struthers from the Carolina Hurricanes. Christian Propp has a tryout with the Pittsburgh Penguins, while fellow goaltender Christian Purboo has two visits, with the Los Angeles Kings and Vancouver Canucks.