Coe is Player of the Week 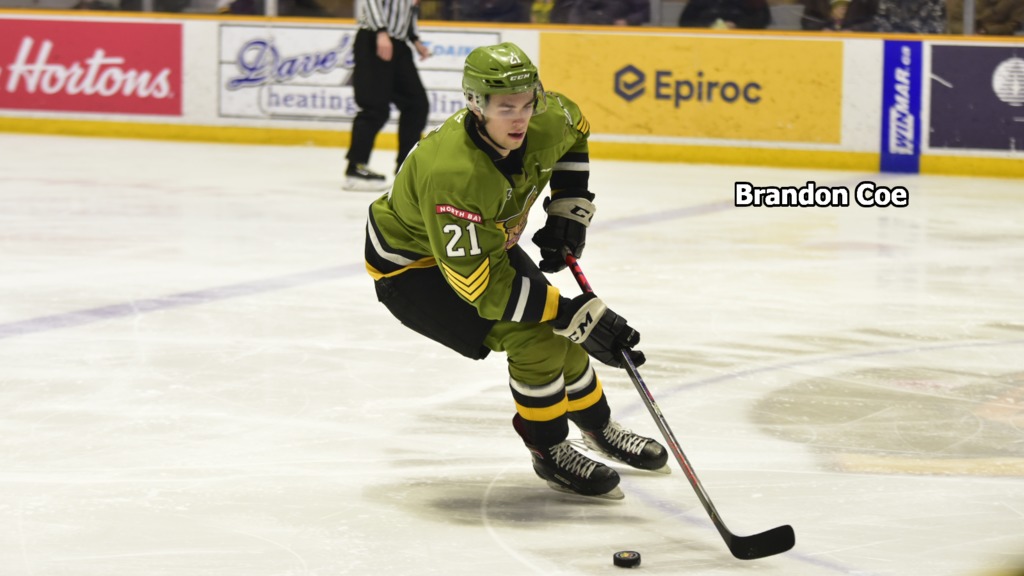 NORTH BAY, Ont. — Brandon Coe of the North Bay Battalion has been named Player of the Week for the period ended Sunday, the Ontario Hockey League announced Monday.

Right winger Coe scored three goals and earned five assists for eight points as the Battalion won all three games on its schedule to push a season-best winning streak to four games.

He is the first Battalion player to earn the weekly honour since Justin Brazeau last did so in October, 2018, but the recognition for Coe comes seven days after Joe Vrbetic was named Goaltender of the Week.

Coe had one goal and two assists for three points in a 3-0 home-ice victory Thursday night over the Ottawa 67’s and produced two assists, one on Kyle Jackson’s game-winning goal, in a 4-2 road win Friday night over the Oshawa Generals. On Sunday, Coe scored two goals and added an assist for three points in a 7-3 conquest of the visiting Niagara IceDogs.

“I think we played some really great hockey as a team this weekend, stuck to our game plans and capitalized on our opportunities,” Coe said of the Troops, who have a won-lost-extended record of 12-6-1 for 25 points, first in the Central Division and Eastern Conference.

He said he hopes “just to keep on winning and try to hold that spot at No. 1 in the conference come playoff time.”

“Brandon has been a force on the ice all season, and this award is a nice way to recognize his hard work. Brandon has worked incredibly hard over the offseason and has been a real leader for us this year. We’re very happy for him.”

A fourth-round choice of the San Jose Sharks in the 2020 National Hockey League Draft, alternate captain Coe is on an eight-game points streak, matching a career-high run earlier this season, during which he has scored three goals and earned 14 assists for 17 points.

His torrid pace has seen Coe move into a tie with John Hughes and Kamil Kreps for 17th place in points in franchise history. In 207 career games, Coe has 61 goals and 89 assists for 150 points.

A six-foot-five, 203-pound resident of Ajax, Ont., he turns 20 on Dec. 1. The Battalion chose him third overall in the 2017 OHL Priority Selection from the Toronto Nationals minor midgets.

Coe, who has nine goals and a league-leading 24 assists for 33 points in 19 games, is one point behind OHL scoring leader Tucker Robertson of the Peterborough Petes. Coe’s plus-minus rating of plus-14 has him tied for fifth in the league with linemate Matvey Petrov.

Also considered for the award were Robertson and Kyle McDonald of the Windsor Spitfires.