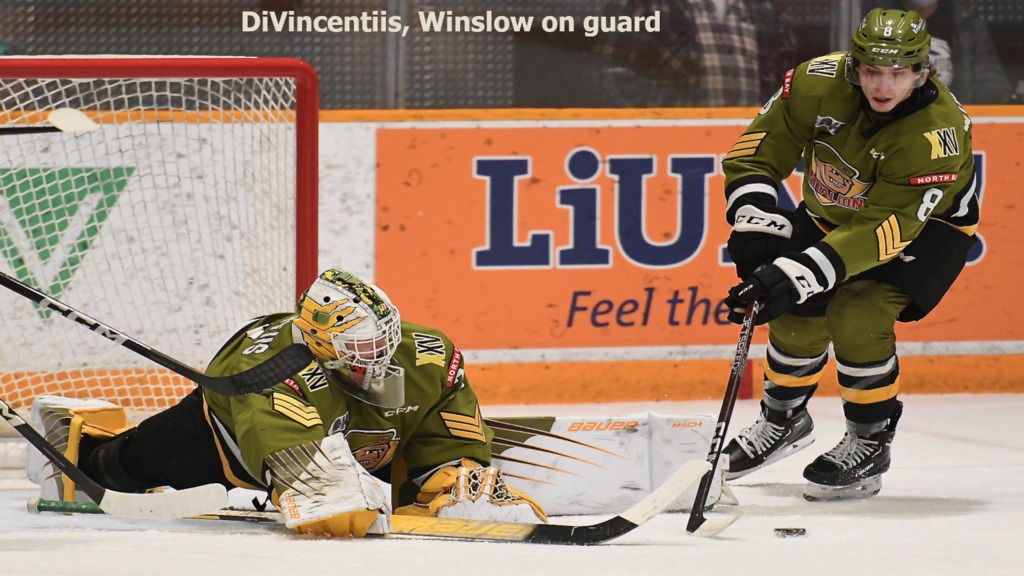 NORTH BAY, Ont. — The Hamilton Bulldogs are well known to coach Ryan Oulahen and the North Bay Battalion, who vow not to take the Ontario Hockey League visitors lightly at 7 p.m. Thursday.

“They’re probably playing the most competitive, consistent hockey that they have all season with the moves that they’ve made,” said Oulahen, whose charges are No. 6 in the Canadian Hockey League Top-10 rankings this week, their best showing of the season.

“I have been on that other side too. When I was with Flint (Firebirds) we kind of did that when we made some big moves to shed some pieces. Your team starts playing consistent. It plays hard, and you become a very dangerous team, so I think the Hamilton team is kind of like that.

“They’ve beaten some really good teams as of late. They’re on a roll. They play really good, sound hockey, very, very well coached, and we’re going to have to be ready and have our best tomorrow night.”

The Battalion, which boasts a won-lost-extended record of 29-10-1 for 59 points atop the Central Division, has won nine straight home games and six in a row overall. The Troops, who won 5-1 and lost 4-1 at Hamilton in November, are 14-2-1 in their last 17 games.

The Bulldogs, 17-18-4 for 38 points, fourth in the East Division, have won their last two games, on the road against the Ottawa 67’s and Kingston Frontenacs.

The Battalion visits the Mississauga Steelheads on Friday night and entertains the Sudbury Wolves on Sunday to complete the week.

Right winger Kyle McDonald, who had three goals and one assist in a 7-3 home-ice victory Sunday over Flint, has missed 23 games this season, including 18 with a back issue, but has 16 goals and five assists for 21 points in the 17 games he’s played.

McDonald scored his goals in the third period after being inserted on a line with centre Kyle Jackson and left winger Josh Bloom. Jackson paces the Battalion in scoring with a team-leading 24 goals and 31 assists for 55 points in 40 games, while left winger Matvey Petrov has 15 goals and a team-high 39 assists for 54 points in 39 games.

In 28 games, goaltender Dom DiVincentiis, who produced a season-best 47 saves against Flint, has a league-leading 2.51 goals-against average, a .910 save percentage that ranks third in the OHL, one shutout and a 22-6-0 record that sees him topping the league in wins.

Hamilton, which swept the Battalion in a four-game Eastern Conference final last year on the way to the OHL title, overhauled its roster before the Jan. 10 deadline, making six trades in which it dealt away six players and acquired as many in addition to 13 OHL Priority Selection picks, only one of them conditional.

The newcomers to the lineup include right winger Nick Lardis and centre Sahil Panwar, who arrived with two picks, one conditional, from the Peterborough Petes for right winger Avery Hayes and defenceman Gavin White, and centre Luca Testa and rearguard Carson Lloyd, added with a second-round pick from the London Knights for centre Ryan Winterton and left winger Ryan Humphrey.

The Bulldogs got six picks, numbering two second-rounders, two thirds and two fourths, from Ottawa for centre Logan Morrison and one pick from the Sarnia Sting for left winger Brenden Anderson.

Hamilton acquired defenceman Cedricson Okitundu and centre Ben Bujold from the Guelph Storm and London respectively for a total of three picks, including a second-rounder.

Lardis, a first-round selection, sixth overall, in 2021, has five goals and three assists for eight points in five games with Hamilton after recording 12 goals and seven assists for 19 points in 36 games this season with Peterborough. Bujold was a first-rounder to London in 2020, and Testa was the Knights’ first-round pick in 2022.

The Hamilton game marks Bell Let’s Talk Night, which will feature prizes such as toques, T-shirts and more.