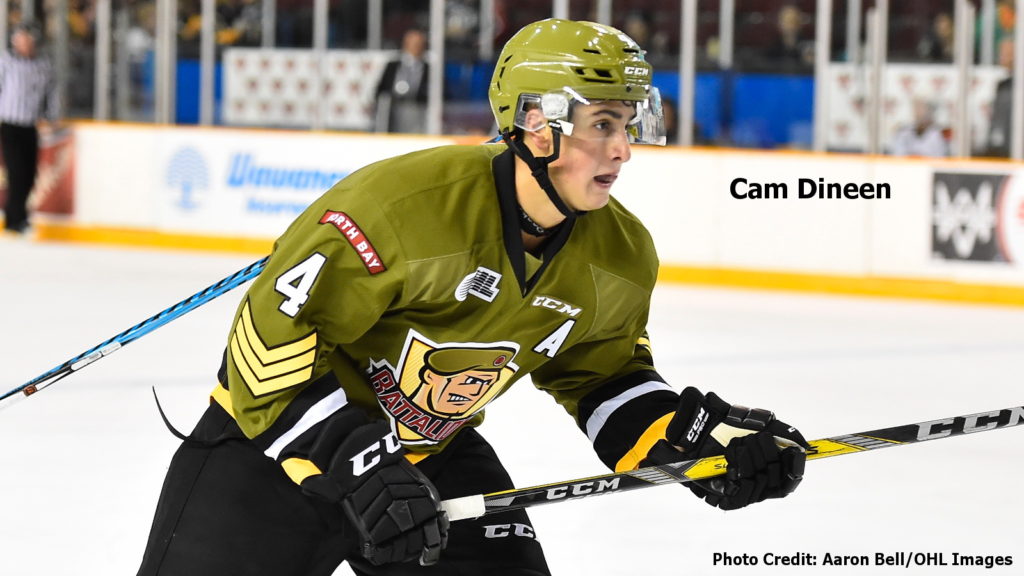 Henderson, 17, is a five-foot-10, 162-pound left shot from Baxter, Ont., a community in the Township of Essa, 10 kilometres southwest of Barrie. In 19 games this season he has five assists and six penalty minutes.

Henderson was a sixth-round pick, 117th overall, by Sarnia in 2016 from the Barrie Jr. Colts minor midgets. He played six games with the Sting last season without earning a point or receiving a penalty but had seven goals and 32 assists for 39 points in as many games with the Chatham Maroons of the Greater Ontario Junior Hockey League’s Western Conference.

“He’s a skilled defenceman who was a point-a-game player in junior B last year,” Stan Butler, Battalion director of hockey operations and head coach, said of Henderson. “We hope, with the way the game is going with puck-moving defencemen, that he can fit into that role here.”

Henderson is expected to be in the lineup when the Troops play host to the London Knights at 2 p.m. Sunday.

Selected by the Troops from the New Jersey Rockets under-19 team, Dineen became a third-round choice, 68th overall, of the Arizona Coyotes in the 2016 National Hockey League Draft and signed a three-year entry level contract last May 1.

He was second in scoring among OHL rearguards in his rookie season of 2015-16, netting 13 goals and adding 46 assists for 59 points in 68 games. He was named to the first all-rookie team and tied Mikhail Sergachev of the Windsor Spitfires for second place in rookie-of-the-year voting behind winger Alexander Nylander of the Mississauga Steelheads.

Dineen was limited to 29 games last season after suffering a knee injury on Dec. 9, 2016, in a 5-2 loss to the host Oshawa Generals, requiring surgery in Arizona and missing the rest of the schedule. He had six goals and eight assists for 14 points with eight PiM in the truncated season.

“Cam was a fixture here,” said Butler. “He’s a high-quality young man, as high as any we’ve ever had in our organization. He’s an exceptional player, and it was no easy decision to move him. We were fortunate to have him in our program, and we wish him nothing but success in all his future endeavours on and off the ice.”

The deal was the Battalion’s second in four days in advance of the OHL trade deadline at noon next Wednesday. The Troops acquired 18-year-old centre Matthew Struthers, a 14th-round pick this year and a second-rounder in 2020 on Wednesday from the Owen Sound Attack for overage centre Brett McKenzie.

The Battalion, which missed the playoffs for the third time in the franchise’s 19-year history last season, has a won-lost-extended record of 14-19-6 for 34 points, fourth in the Central Division and ninth in the Eastern Conference, after a 3-2 road victory Friday night over the Hamilton Bulldogs.