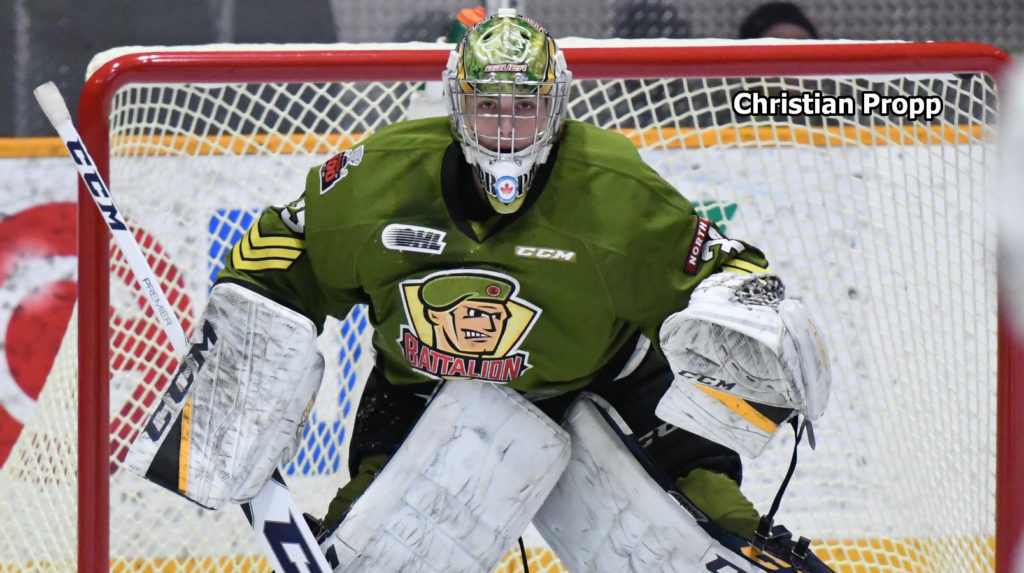 NORTH BAY, Ont. – Centre Matthew Struthers and three other members of the North Bay Battalion have been named in the final rankings issued Monday by the National Hockey League’s central scouting department in advance of the 2018 NHL Draft.

Struthers, a six-foot-two, 209-pound resident of Milton, Ont., was acquired by the Battalion in a Jan. 3 trade from the Owen Sound Attack. In 30 games with North Bay, he had 14 goals and 13 assists for 27 points. Struthers, who turned 18 on Dec. 26, had nine goals and nine assists for 18 points in 32 games with Owen Sound.

“It’s definitely exciting to see your name on a list,” Struthers said from home. “It’s also nice to see my linemates and our deserving goalie get recognized as well.”

Brazeau, a native of New Liskeard, Ont., led the Battalion in goals and points with 39 goals and 36 assists for 75 points in 68 games. Having turned 20 on Feb. 2, he stands six-foot-five and weighs 221 pounds.

“It’s always nice getting recognized on the list and just shows that I keep improving my game,” Brazeau said from New Liskeard. “Now I just have to have a good hard-working summer and see where it leads to.”

“It feels great to be on the final central scouting list,” Burghardt said from Bowmanville. “It feels pretty special to be recognized for your hard work. I need to keep proving myself and working every day on my game. Would like to congratulate my two linemates also.”

Propp, who joined the Troops in an Oct. 22 trade from Owen Sound, posted a won-lost-extended record of 18-9-5, a 2.86 goals-against average, a .908 save percentage and one shutout in 32 appearances with North Bay. Propp, who also shared a shutout with Julian Sime, saw action in three games with the Barrie Colts early in the season.

A six-foot-two, 195-pound Milton resident who turned 19 on March 27, Propp is the top-ranked of five OHL goaltenders.

“Hearing the news about being on central scouting was extremely exciting,” Propp said from home. “It’s always a humbling experience when scouts at the next level take notice in what I do on the ice. I think both the team and myself were able to turn a few heads with our play last season. We showed the league that we were a determined group, and I think that allowed for guys to get noticed on an individual basis.

“Despite the pleasant news, I’m still continuing to improve as much as possible so I can come back even stronger for next season.”

Right winger Andrei Svechnikov of Barrie, a Russian import, is rated No. 1 on the list of skaters, while Olivier Rodrigue of the QMJHL’s Drummondville Voltigeurs is the top-ranked goaltender. The QMJHL has seven rated goaltenders and the WHL four for a CHL total of 16.