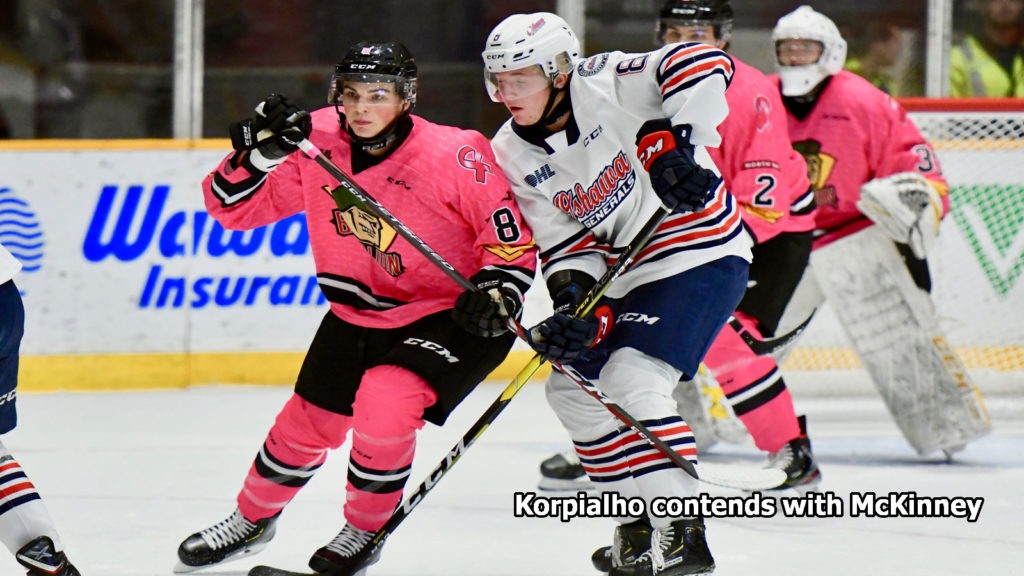 Kyle MacLean and Oliver Suni each had one goal and one assist and Brett Neumann also scored for Oshawa, the only unbeaten team in the OHL, with a won-lost-extended record of 8-0-0. Goaltender Andrew MacLean, who leads the league in wins with seven, produced 33 saves.

Overage captain MacLean, returned to Oshawa last Thursday by the National Hockey League’s New York Islanders, didn’t dress for a 5-1 verdict Friday night over the visiting Battalion but played his second game of the OHL season in the rematch, earning his first points.

Cameron Peters contributed one goal and one assist for North Bay, which also got goals from Brandon Coe, Niki Korpialho and Mitchell Russell. Goaltender Christian Cicigoi faced 35 shots before a crowd of 2,002 for the Pink in the Rink game in support of the Canadian Cancer Society and breast cancer awareness, for which the Battalion wore pink-themed sweaters and socks.

The Troops, 1-6-0, lost a fourth consecutive game since defeating the visiting Kitchener Rangers 3-2 in overtime Sept. 26.

The Troops built a 2-1 lead in the first period, in which they outshot Oshawa 17-11. Coe struck first at 3:56 when he converted the rebound of Grima’s shot from the top of the right-wing circle. Brad Chenier drew the second assist on Coe’s second goal of the season.

The Generals took advantage of a turnover deep in Battalion territory to tie it at 13:19, with McKinney beating Cicigoi low to the glove side from the left circle.

Korpialho outmuscled David Jesus to bury the rebound of a Peters drive from the high slot to give the Battalion a 2-1 lead at 14:03. It was Finnish import Korpialho’s first OHL goal.

MacLean tied it on the power play at 2:44 of the second period, sweeping a Danil Antropov feed over Cicigoi’s right shoulder, before Oshawa grabbed a 4-2 lead on goals 18 seconds apart. Suni jammed a loose puck past Cicigoi from the deep slot after MacLean charged to the net at 9:10, and Neumann promptly finished off a two-on-one rush with Suni.

Russell pulled the Battalion within a goal at 13:22, driving past Antropov and slipping the puck between goaltender MacLean’s legs. Matthew Struthers and James Mayotte received assists on Russell’s second goal.

McKinney restored Oshawa’s two-goal lead in the final period as he redirected a Nico Gross pass while parked alone in front of Cicigoi.

North Bay got back within a goal at 15:26. The Generals killed a high-sticking penalty to Antropov before Henderson’s drive from the right circle ricocheted off a defender to Peters, who whipped the puck past a sprawling MacLean. Grima also assisted on Peters’s first goal.

Cicigoi left for a sixth skater with 1:43 to play. Suni hit the right post while trying to score into the empty net, and Coe’s last-second chance from the lip of the crease was as close as the Troops could get to tying the game.

The Battalion visits the Niagara IceDogs at 7 p.m. Saturday. The game can be seen live on YourTV Channels 12 and 700 and heard on Country 600 CKAT.

BATTALION BULLETS: Pink in the Rink, presented by the Canadian Automobile Association, saw Josh Cappadocia, Deb Marson and cancer patient Lance Coe, Brandon’s father, conduct the ceremonial faceoff. The sweaters worn by the Battalion were auctioned, and fans bought cupcakes courtesy of SugarDaddy Cupcakes. Prizes included a voucher for 500 CAA Bucks, a suite rental for 14 persons and a Battalion package. In addition, members of North Bay Fire and Emergency Services were on hand as part of Fire Prevention Week … The Battalion scratched Simon Rose, Josh Currie, Nick King and Alex Christopoulos … North Bay went 0-for-4 on the power play. Oshawa was 1-for-2 … The start of the game was delayed 22 minutes while arena staff struggled to replace a pane of glass … Defenceman Ryan Thompson of the Troops marked his 17th birthday … Daniel Walker, who played three seasons with North Bay after being a 10th-round pick in the 2015 OHL Priority Selection, is suspended indefinitely after incurring a blindsiding major and game misconduct in a 6-3 road win over the Hamilton Bulldogs last Saturday night. Left winger Walker was traded to Oshawa on June 28 for its fourth-rounder in 2023 … Suni, a first-round choice in the Canadian Hockey League Import Draft in June from Finland, leads OHL rookies with three goals and nine assists for 12 points in eight games.