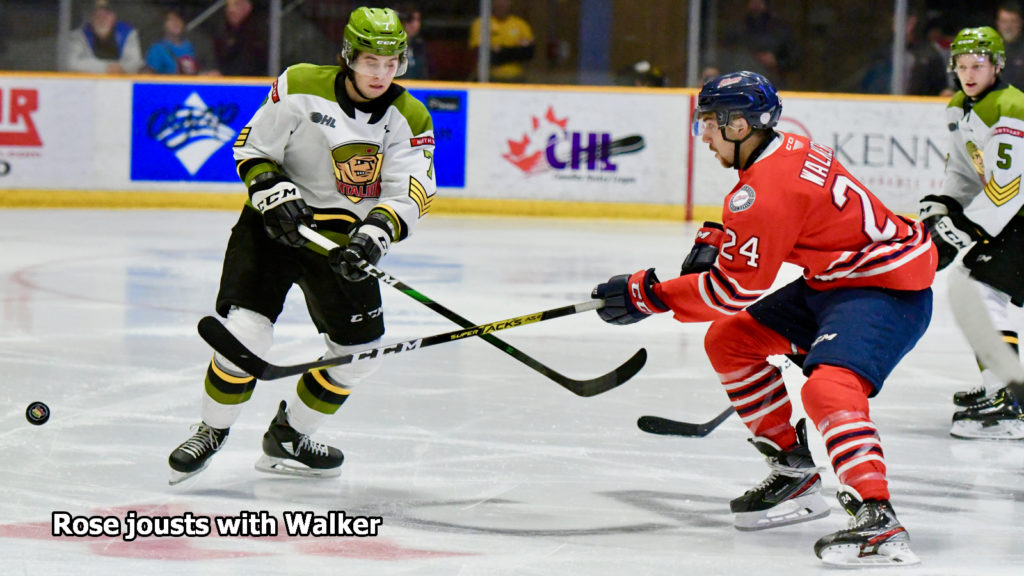 Allan McShane scored two goals, Oliver Suni had one and Neumann added an assist as goaltender Andrew MacLean made 21 saves for Oshawa, which boasts a won-lost-extended record of 15-5-1 for 31 points, third in the East Division.

Brandon Coe had one goal and one assist and Brad Chenier and Cameron Peters also scored for North Bay, 4-18-0 for eight points, fifth in the Central Division. Goaltender Joe Vrbetic faced 35 shots for the Battalion, which snapped a franchise-record 11-game losing streak with a 5-4 home-ice win Sunday over the Barrie Colts.

“We were close, but unfortunately close doesn’t help,” said Battalion coach Stan Butler. “You have to find ways to win these games. I said to the guys after the second period that it was a 50-50 game, and any time you’re in a one-goal game you have to find a way to win it.

“Our effort was pretty good. The Generals aren’t a bad team. They’re big and strong, and our young defence struggled a bit with them driving to the net. Two of their goals were a direct result of their guys being physically stronger than our defence.”

Daniel Walker saw his first action at Memorial Gardens since a June 28 trade in which the Battalion received a fourth-round pick in the 2023 OHL Priority Selection. Walker was suspended for the Generals’ first visit.

Neumann scored in the final period, giving Oshawa a 4-2 lead, 55 seconds after Chenier went off for roughing. Neumann snapped the puck from the left-wing circle high over Vrbetic’s glove off a rush before a crowd of 1,826. Serron Noel and Nico Gross assisted on Neumann’s team-leading 16th goal of the season.

Coe pulled the Battalion within a goal at 10:05, taking off down the right side and ripping the puck home from the edge of the right circle. Nick Grima and Braden Henderson provided assists on Coe’s sixth goal.

Vrbetic left for a sixth attacker with 2:09 to play, but the Troops were unable to generate a solid scoring chance.

Oshawa opened the scoring on the first shot, at 1:46 of the first period, when McShane slipped a backhander past the blocker of a screened Vrbetic.

Chenier replied at 11:22, taking a pass from Luke Moncada and firing the puck past MacLean’s stick from the right circle. Coe had the second assist on Chenier’s 10th goal.

Oshawa, which enjoyed the period’s two power plays, directed 17 shots at Vrbetic, who slid to deny Ty Tullio in the 13th minute and got the blocker on a close-range shot by Neumann in the 15th. Vrbetic foiled Danil Antropov from the slot in the last minute. The Battalion had five shots, with Coe forcing MacLean to make a good stop against a rush off the left wing.

Oshawa struck for two goals 24 seconds apart in the second period, sparked by McShane. Vrbetic failed to cover the puck on a shot from the top of the right circle, and McShane capitalized on the loose rubber at 4:20. Suni then charged off the right wing and cashed a backhander.

Peters connected at 15:27 when his attempt to pass to Harrison Caines on a two-on-one rush deflected off sliding defender Lleyton Moore into the net, catching MacLean by surprise. Liam Arnsby had the lone assist on Peters’s second goal.

The visitors held a 13-11 edge in shots in the frame. Vrbetic made an early save on William Ennis, denied Daniel Michaud in the ninth minute and foiled penalty killer Neumann in the 20th. MacLean kicked away a Josh Currie drive, while Coe failed to convert a Moncada pass on a late two-on-one rush and Kyle Jackson missed in tight.

The Battalion visits the Hamilton Bulldogs at 7 p.m. Friday. The game can be seen live in North Bay on YourTV Channels 12 and 700 and heard on Country 600 CKAT.

BATTALION BULLETS: It was My Team Cares Night, presented by Enercare in support of the North Bay Food Bank. Enercare Bam Bam Cheer Sticks were presented to the first 1,000 fans, and those in attendance were asked for non-perishable items for the food bank … It was the third meeting between the teams, the Generals having won 5-1 at home Oct. 4 and 5-4 as the visitors Oct. 10. The season series ends Dec. 29 at Oshawa … Chenier has a seven-game points streak during which he has seven goals and three assists for 10 points. In 226 games, Chenier has 64 goals and 69 assists for 133 points, tied with Scott Tanski for 23rd place on the franchise’s all-time list … Coe has a five-game points streak in which he has three goals and five assists for eight points … The Battalion went 0-for-3 on the power play. Oshawa was 1-for-3 … The Battalion was without Paul Christopoulos, Niki Korpialho and Mitchell Russell … Christopoulos completed a two-game suspension for putting the puck into the seats in a 5-1 home-ice loss to Hamilton last Thursday night … Korpialho suffered an upper-body injury against Barrie … The Troops called up Mat Hardwick from the junior A Powassan Voodoos for a second game this season … In three games against North Bay, Swiss import Gross has three goals and three assists for six points … The referees were Ryan Elbers and Morgan MacPhee.