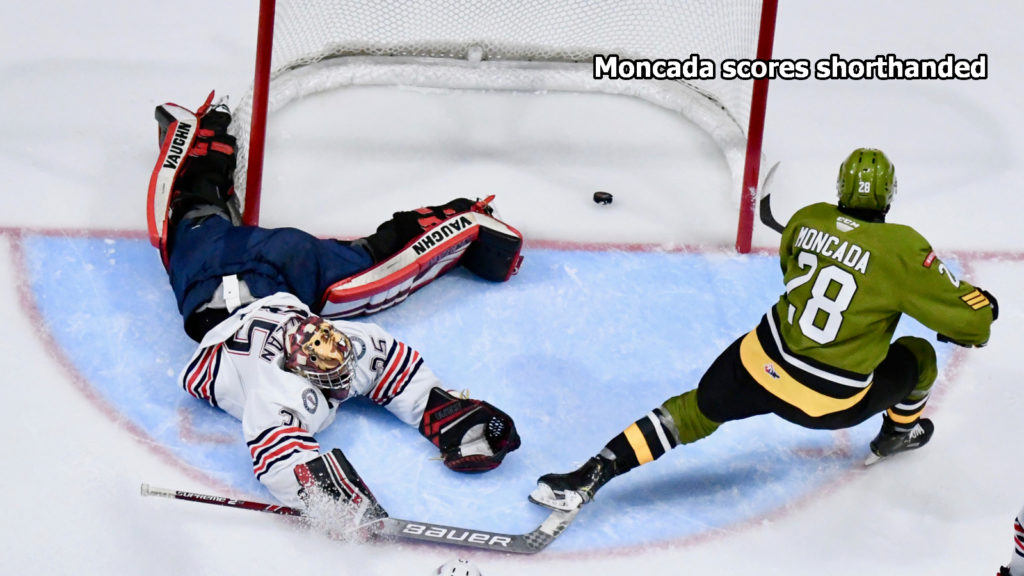 OSHAWA, Ont. — Nico Gross scored three goals, including an empty-netter, to propel the Oshawa Generals to a 5-1 victory over the North Bay Battalion in Ontario Hockey League action Friday night.

Ty Tullio and Ryan Gagnier also scored for Oshawa, which moved its won-lost-extended record to 5-0-0 and maintained its status, with the Sault Ste. Marie Greyhounds, as one of two undefeated teams in the OHL. Goaltender Andrew MacLean faced 25 shots before a crowd of 4,164 at the Tribute Communities Centre.

Oshawa scored two goals one minute apart in the first period, sparked by Gross, who hammered the puck over Vrbetic’s glove from the right-wing circle at 14:09, four seconds after the Troops finished killing a checking-from-behind penalty to Brandon Coe. Paul Christopoulos then fell at the blue line as Tullio moved in alone to beat the sprawling Vrbetic with a backhanded deke.

Vrbetic, who faced 17 shots in the frame, was besieged early but denied excellent chances for Brett Neumann, Danil Antropov, Oliver Suni and Giovanni Vallati. The Battalion had eight shots, its best chances coming late. Cameron Peters charged to the net in the last minute and drew a penalty when Vallati was whistled for hooking. MacLean stopped a Brad Chenier drive with Coe looking for the rebound at the lip of the crease and turned away Matthew Struthers.

The teams traded goals in the second period, with penalty killer Moncada making it 2-1 at 5:44 as he broke to the net on a two-on-one rush and steered a Chenier pass around a fallen MacLean. The goal, Moncada’s second of the season, followed a shorthanded tally in a 5-2 loss Thursday night to the visiting Peterborough Petes.

Chenier has two goals and four assists for six points in a four-game points run.

Oshawa replied on the power play at 15:24 as Gross beat Vrbetic low to the glove side from the edge of the left circle.

The Troops were outshot 13-6 in the period, but Vrbetic was sharp on good chances by Neumann, Antropov, Jacob Winterton and Daniel Walker, who faced his former Battalion teammates for the first time. MacLean reacted quickly in the first minute to find a screened drive by Mitchell Russell.

The Battalion had two good chances on the power play early in the third period. MacLean denied a close-in chance by Chenier, and Christopoulos rang the puck off the right post seconds later. The Troops failed to generate a chance after Dawson McKinney went off for tripping at 14:46, and Vrbetic left for a sixth skater with 1:40 left.

Defenceman Gross, a Swiss import, finished a three-way passing play with Walker and Brett Harrison to score into the empty net at 18:36, and Gagnier finished the scoring at 19:21 with Vrbetic back in the crease, burying the rebound of a McKinney shot.

The Battalion returns to action when it plays host to Oshawa at 7 p.m. Thursday in the annual Pink in the Rink game.

BATTALION BULLETS: Walker, who played three seasons with North Bay after being a 10th-round pick in the 2015 OHL Priority Selection, was traded to Oshawa on June 28 for its fourth-rounder in 2023 … The Battalion scratched Niki Korpialho, David Campbell and Simon Rose, who is out for two to three weeks with a hamstring injury suffered in the second period against Peterborough. Penalty killer Rose got tangled up with Nick Robertson, and both fell to the ice. Defenceman Rose was assessed a holding penalty on the play as the period ended … Rearguard Ryan Thompson made his OHL debut. He was the Troops’ first-round pick in the OHL Under-18 Priority Selection in April from the Toronto Marlboros midgets … Braden Henderson played his 100th game since a Jan. 6, 2018, trade from the Sarnia Sting that saw fellow rearguard Cam Dineen go the other way. Henderson has one goal and 15 assists for 16 points with North Bay … The Battalion went 0-for-4 on the power play. Oshawa was 1-for-5 … Suni, Oshawa’s first-round choice in the Canadian Hockey League Import Draft in June from Finland, earned two assists and leads OHL rookies with nine points, including two goals … Oshawa wingers Serron Noel and Tye McSorley completed five-game suspensions for actions during the preseason. Also scratched was Kyle MacLean, returned by the National Hockey League’s New York Islanders on Thursday.