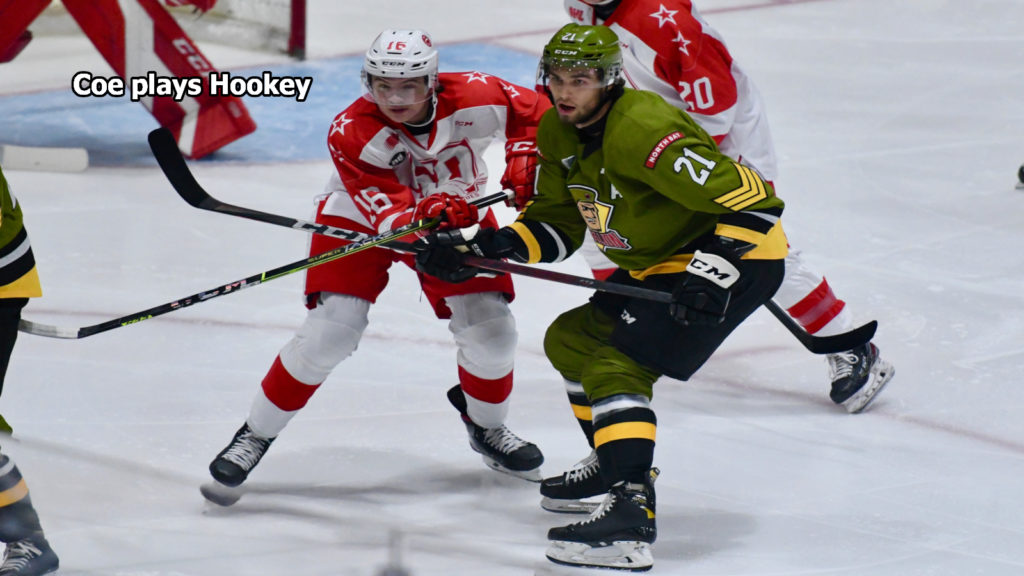 Matvey Petrov scored the Battalion goal, his fourth in two games, as the Troops saw their record evened after they downed the visiting Peterborough Petes 7-4 Thursday night in the OHL’s first game to get under way after the 2020-21 season was scrapped because of the coronavirus pandemic.

The game attracted 2,476 to GFL Memorial Gardens, limited to 50 percent capacity by covid-19 protocols. The OHL announced Friday that, after a provincial government decision on indoor sports venues, the 17 Ontario-based clubs will have 100 percent capacity of fully vaccinated fans starting Saturday night.

Calisti completed the scoring at 10:21 of the final period when he was credited with a goal that went to a lengthy video review. The puck lay outside the net on the mesh, but the goal stood, apparently because it had been signaled on the ice and the video afforded referee Drew Jackson no insight as to what happened.

Cam Gauvreau and Sault Ste. Marie’s Tyler Savard exchanged a plethora of solid punches in front of the Battalion net at 13:56 to warrant fighting majors. Savard was staggered by a late right and left the penalty box before play resumed to seek repairs.

The Battalion, which trailed 1-0 at the first intermission, tied it 38 seconds into the second period when Petrov spun in the slot to beat Ivanov on assists by Kyle Jackson and Brandon Coe. Owen Van Steensel then put the puck in the net at 2:08 off a three-on-one rush, but the play was ruled offside upon video review.

Dickinson struck on the power play at 10:15, wiring a shot from the top of the left-wing circle, and MacKay connected at 12:34, putting the puck past DiVincentiis on a rush at speed down the left side.

Ryan O’Rourke drew a head-checking major and game misconduct at 15:29 for a hit on Owen Outwater, North Bay’s first-round pick in the OHL Priority Selection in June, but the Battalion failed to muster any kind of threat with the man advantage.

Kerins scored at 19:18 of the first period, getting loose on the left side on a pass from Tye Kartye.

The Greyhounds forged a 13-7 edge in shots in the frame, with DiVincentiis surviving a sweeping missed shot at an open net by Kartye in the seventh minute and denying Kerins when he dashed up the middle for a close-range chance at the 13-minute mark.

The Battalion plays host to the Sudbury Wolves in the traditional Thanksgiving Day game at 2 p.m. Monday.

BATTALION BULLETS: The Greyhounds wore sweaters commemorating 50 years since the club was accepted into the Ontario Hockey Association’s Major Junior A league, forerunner to the OHL, in 1972 … The ’Hounds honoured the late Angelo Bumbacco, a onetime coach and a founding executive. The Sault Ste. Marie native died at 88 on Oct. 27, 2020 … Opening lines again had Jackson centring left winger Petrov and right winger Coe, Liam Arnsby centring left winger Josh Currie and right winger Alex Christopoulos, Dalyn Wakely pivoting left winger Van Steensel and right winger Nic Sima and Michael Podolioukh centring left winger Outwater and right winger Christian Stevens … Defence pairs saw Avery Winslow with Simon Rose, Tnias Mathurin with Ty Nelson and Gauvreau alongside Paul Christopoulos … Joe Vrbetic backed up DiVincentiis … The Battalion scratched Anthony Romani, Mitchell Russell and Alexander Lukin, who received a major and game misconduct in the Peterborough game for a head check on Nick Lardis. Lukin was assessed no supplemental discipline … Gauvreau made his OHL debut in place of Lukin … The OHL has awarded Petrov an assist on Jackson’s winning goal in the third period against Peterborough, giving the Russian import a four-point game in his league debut … The Battalion went 0-for-1 on the power play. Sault Ste. Marie was 1-for-3.