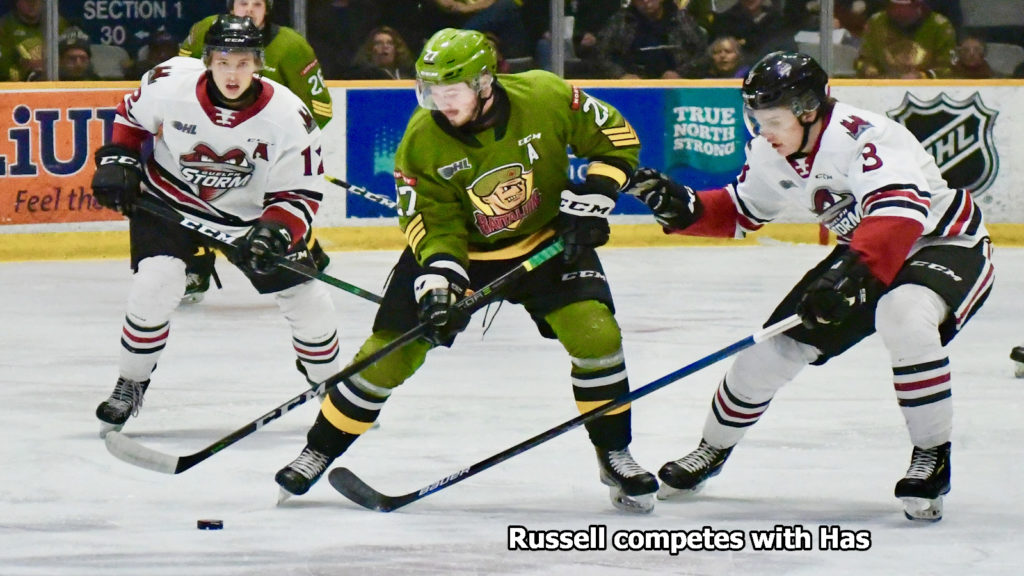 Eric Uba had one goal and one assist, and Matthew Papais and Fedor Gordeev also scored for Guelph, which won for the first time since a 5-2 home-ice decision Jan. 3 over the Peterborough Petes.

Goaltender Nico Daws faced 20 shots for the Storm, which has a won-lost-extended record of 23-18-5 for 51 points, one more than the Owen Sound Attack and third in the Midwest Division.

Luke Moncada scored two goals and Mitchell Russell one for North Bay, 11-33-2 for 24 points, fifth and last in the Central Division. Goaltender Joe Vrbetic made 31 saves before 1,792 at Memorial Gardens.

“It was pretty evenly contested, back and forth,” said Battalion interim coach Ryan Oulahen. “Both teams were trying to get out of a slump. We knew we were going to see their best game.

“Guelph played really well, but we were up 3-2 with 12 minutes to go, in full control, and we weren’t able to get a big penalty kill. We had some lineup issues with a short bench, and it probably cost us in the third period.”

Moncada gave the Battalion a 3-2 lead at 8:11 of the final frame, drilling a pass from Brandon Coe on the end boards past Daws’s blocker. Simon Rose also assisted on Moncada’s team-leading 26th goal of the season.

Defenceman Gordeev replied on the power play at 10:05, blasting a Pavel Gogolev feed through traffic from inside the blue line.

Daws turned away a good Moncada chance from the left-wing circle in the 12th minute, and Vrbetic made good stops against Gogolev and Uba before Stevenson got to the crease and chipped a Jacob Roach pass from behind the goal line over Vrbetic’s right pad.

Guelph scored on its first shot when Papais beat Vrbetic low to the glove side from the left circle at 7:39 of the opening period.

The visitors forged a 9-8 edge in shots, but the Troops had several good chances. Daws foiled Shane Bulitka from the goalmouth and made back-to-back saves in close on Coe. Moncada failed to convert a Coe pass on a two-on-one rush in the final minute, and Avery Winslow couldn’t control a bouncing puck with an open net at the end of the period.

Vrbetic found a Danill Chayka shot through a screen in the 15th minute and came out to challenge Gogolev off the left wing in the 17th. Roach hit the right post midway in the period.

Russell connected at 4:11 of the second period when he ripped the puck high over Daws’s glove from the right circle. The unassisted goal was Russell’s 17th.

Uba converted the rebound of a Gogolev shot off the end boards past Vrbetic to put Guelph back in front at 14:48, but Moncada tied it 2-2 as he fired Coe’s cross-ice pass past a sliding Daws at 17:43. Bulitka had the second assist.

The Battalion visits the Mississauga Steelheads at 7 p.m. Friday. The game can be heard live in North Bay on Country 600 CKAT.

BATTALION BULLETS: It was Bruce Power Night, in partnership with the Brain Tumour Foundation of Canada. Through education and research, the foundation serves those affected by the 120 types of brain tumours. Bruce Power produces medical isotopes for the treatment of brain tumours … The teams completed their season series, after Guelph won 9-3 at home Oct. 25 … Moncada had three goals in the two games against the Storm … Bulitka has a three-game points streak in which he has three goals and one assist for four points … The Battalion went 0-for-1 on the power play. Guelph was 1-for-3 … Opening lines saw Moncada centring Bulitka on left wing and right winger Coe, Liam Arnsby pivoting left winger Kyle Jackson and right winger Russell and Josh Currie centring left winger Harrison Caines and right winger Chad Denault. Centre Christian Stevens and left winger David Campbell had various linemates … The Battalion, which dressed 11 forwards and seven defencemen, was without Mason Primeau, Braden Henderson and Alex Christopoulos … Guelph coach George Burnett was on a scouting trip. Associate coach Chad Wiseman and assistant Ken Peroff, a onetime Battalion defenceman from Astorville, ran the bench … Martin Has played his eighth game since a trade Jan. 10. The Czech import played one game with the Battalion.