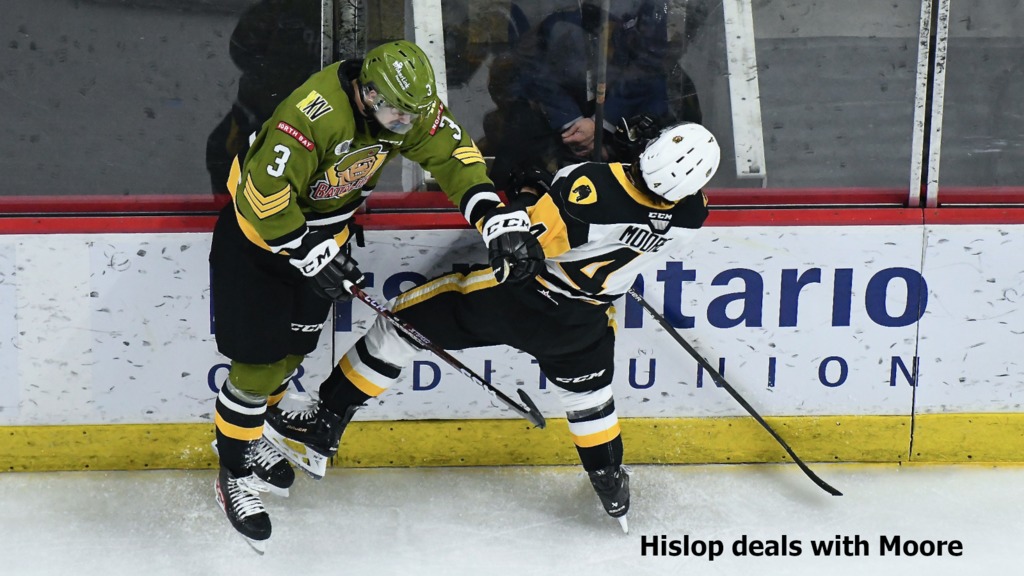 HAMILTON — Avery Hayes scored two goals, including an empty-netter, and added an assist to lead the Hamilton Bulldogs to a 4-1 Ontario Hockey League victory Friday night over the North Bay Battalion.

Logan Morrison also had an empty-net goal and earned two assists, while Gavin White provided the other goal for Hamilton, which moved its won-lost-extended record to 8-10-1 for 17 points, fourth in the East Division. Goaltender Tristan Malboeuf made 27 saves before a FirstOntario Centre crowd of 2,676.

Charlie Robertson, who posted the shutout in a 5-0 win over the visiting Ottawa 67’s Thursday night, backed up McIvor as the Battalion slipped to 15-7-0 for 30 points, first in the Central Division.

Defenceman White scored at 19:29 of the first period, driving to the right-wing faceoff dot and snapping home his third goal of the season. Morrison had the lone assist.

Hamilton forged a 13-9 edge in shots in the frame, with Ryan Humphrey testing McIvor at the left post two minutes into the game. McIvor sprawled to deny Patrick Thomas on the right side in the 10th minute and had penalty killer Noah Nelson fire high and wide right on a breakaway at 13:39.

After Dalyn Wakely went off for interference at 15:24, Paul Christopoulos took a pass from Liam Arnsby and twisted past a defender to threaten Malboeuf, but the goaltender got his blocker on the shot. McIvor then thwarted Cole Brown’s effort at 17:40.

Hamilton laid siege to the Battalion net before Hayes capitalized at 11:12 of the second period, swiping the puck past McIvor from the lip of the crease off a pass from Morrison on the right boards. Jorian Donovan also assisted on Hayes’s goal, the eventual winner.

Ertel replied at 15:22, scoring from a sharp angle to Malboeuf’s right after Ty Nelson’s blast rebounded to the boards. Kyle Jackson drew the second assist on Ertel’s eighth goal.

Owen Van Steensel appeared to have tied it at 18:44 when he redirected a left-point shot, but the play went to video review and the ruling was that Van Steensel contacted the puck with a high stick.

White then hauled down Josh Bloom on a breakaway in the final seconds without a call.

The Bulldogs outshot the visitors 8-7 in the third period, with Morrison scoring his eighth goal into the vacant net at 18:31 and Hayes following with his team-leading 16th at 19:53.

The Battalion completes the trip, which constitutes the first two of five straight games on the road, against the Niagara IceDogs at 7 p.m. Saturday. The game can be seen live in North Bay on YourTV Channels 12 and 700.

BATTALION BULLETS: Hamilton wore, for the first time, warmup sweaters honouring the Indigenous community. The Bulldogs will auction the sweaters, the work of Indigenous artist Kory Parkin, at the end of the season, with proceeds benefiting the Police Athletic League for Students, or PALS, through the Six Nations Police Service … It was the second of four games between the clubs and the second at Hamilton. Robertson backstopped a 5-1 Battalion win Nov. 4. The last two meetings are at North Bay on Jan. 19 and March 23 … With Dom DiVincentiis undergoing concussion protocol after a collision in practice Tuesday, McIvor, who turned 16 on March 22, was called up from the North Bay Trappers U18 team and backed up Robertson against Ottawa. A product of Warkworth, Ont., McIvor was a fourth-round pick in the OHL Priority Selection in April from the Quinte Red Devils U16s … Nelson has a five-game points streak in which he has two goals and seven assists for nine points … The Battalion went 0-for-2 on the power play. Hamilton was 0-for-3 … The Battalion was without DiVincentiis, Tnias Mathurin, Avery Winslow, Kyle McDonald and Brett Bouchard … Ranvir Gill-Shane was among the Hamilton scratches … Morrison has a nine-game points streak in which he has five goals and nine assists for 14 points … Darcy Burchell and Pat Myers were the referees.