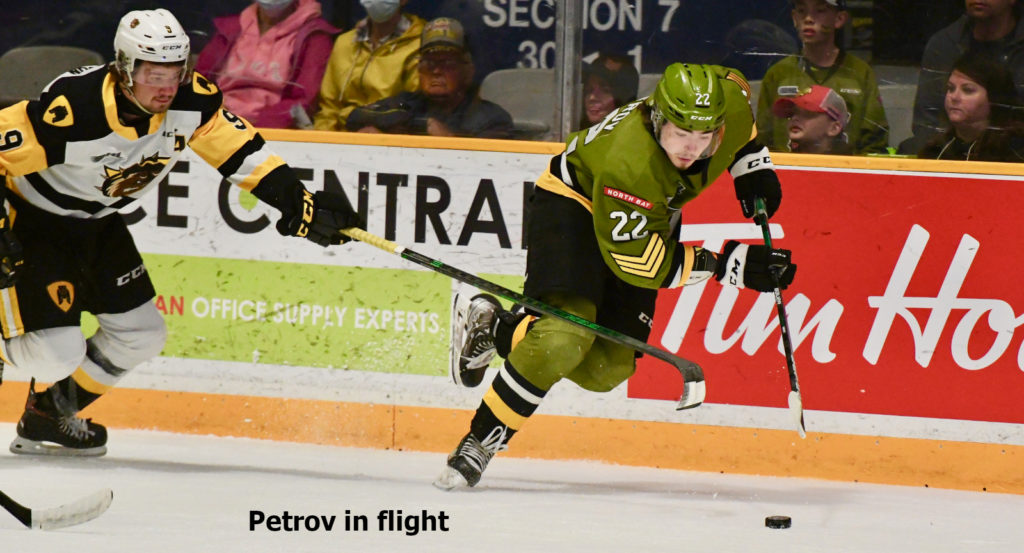 NORTH BAY, Ont. — Ryan Winterton’s goal at 2:34 of the third period proved the winner as the Hamilton Bulldogs defeated the North Bay Battalion 6-4 Wednesday night to take a commanding lead of three games to none in their Ontario Hockey League best-of-seven playoff series.

Winterton, who also had an assist, moved to the slot and scored to the glove side of Battalion goaltender Dom DiVincentiis, giving the Bulldogs a 5-3 lead and moving them within a game of capturing the Eastern Conference Championship Series.

Avery Hayes and Logan Morrison each recorded two goals and one assist and Mark Duarte the other goal for Hamilton, which can sweep the series with a win at 7 p.m. Friday at Memorial Gardens.

Goaltender Marco Costantini made 27 saves for Hamilton, which boasted the best regular-season record in the East Division, conference and league.

Matvey Petrov, Anthony Romani and Nic Sima all had one goal and one assist for second-place North Bay, the Central Division champions, while Brandon Coe provided the other goal. DiVincentiis faced 28 shots before a crowd of 2,480.

The Battalion was without leading scorer Mitchell Russell, who’s listed as out indefinitely with an upper-body injury after playing the first two games of the series, which the Bulldogs won 5-2 and 5-0 at home last weekend.

Coe scored on the power play at 14:24 of the final frame to pull the Troops within a goal, taking a pass from Liam Arnsby and shoveling the puck home from the slot, but, with DiVincentiis gone for a sixth attacker, Morrison skated the puck to the empty net for his league-leading 13th goal of the playoffs at 19:28.

Petrov gave the Battalion its first lead in the series with his second goal at 2:42 of the opening period. Paul Christopoulos sent the puck diagonally back from deep on the right wing, and Petrov stepped into the left circle to beat Costantini high to the short side.

Penalty killer Hayes tied it at 8:14 off a two-on-one rush with Lawson Sherk against Ty Nelson. Sherk carried the puck down the right wing and centred it to Hayes for the conversion.

Hayes struck again for his seventh goal at 13:48 off a faceoff to DiVincentiis’s left. After Arnsby kicked the puck backwards, Morrison relayed it to Hayes in the slot.

Costantini denied Kyle McDonald on a breakaway at 6:48.

Duarte connected 34 seconds into the second period, swiping the puck home from the mid slot on assists by George Diaco and Jan Mysak on a near-broken play for a 3-1 lead.

Romani and Sima tied it with goals 3:57 apart, sparked by Romani’s tally at 4:08 after the forechecking Michael Podolioukh and Sima won a battle for the puck. The assist was Sima’s first playoff point, and he promptly scored off a three-way passing play with Petrov and Tnias Mathurin, going to the goalmouth to direct the rubber past Costantini.

Morrison struck at 11:25, following up on a Hayes shot off the rush. Costantini drew the second assist.

BATTALION BULLETS: The Battalion has an all-time won-lost record of 15-21 in the third game of a playoff series, including 6-8 at home. The Troops are 3-5 at home in such games since relocation from Brampton in 2013 … The Battalion went 1-for-5 on the power play. Hamilton was 0-for-2 … Coe led the Troops with six shots on goal, while Arber Xhekaj paced Hamilton with five … Apart from Russell, the Battalion, which dressed 11 forwards and seven defencemen, scratched Wyatt Kennedy and Owen Outwater … Overager Russell stood second in OHL playoff scoring at puck drop, with 11 goals and as many assists for 22 points in 11 games … Among Hamilton’s scratches was Nathan Staios, who played the first two games in the series but is listed as week-to-week with an undisclosed injury … Hayes has five goals and five assists for 10 points in the series. A resident of Westland, Mich., he was a sixth-round choice in the 2018 OHL Priority Selection from the Detroit HoneyBaked 16U team … Morrison has an 11-game points streak in which he has 13 goals and 11 assists for 24 points … Winterton has an 11-game points streak during which he has five goals and 11 assists for 16 points … McTavish, who assisted on the empty-netter, has a nine-game points streak in which he has nine goals and seven assists for 16 points … Mike Cairns and Mac Nichol were the referees.