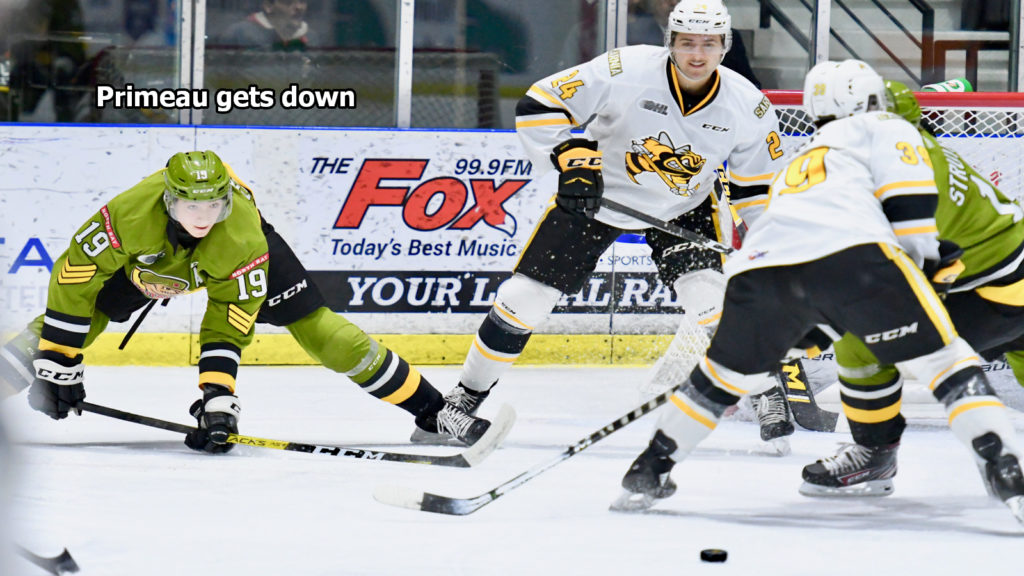 NORTH BAY, Ont. — After playing eight of its last 10 games on the road, the North Bay Battalion is happy to get back to Memorial Gardens for four of the next five.

“Our schedule has been tough to date, so we want to take advantage of some of the home cooking,” assistant coach Adam Dennis said Wednesday.

The Battalion, which has tied a franchise record by losing 10 straight games, plays host to the Hamilton Bulldogs at 7 p.m. Thursday before the Barrie Colts pay a visit Sunday. The Troops have a won-lost-extended record of 3-16-0 for six points, fifth and last in the Ontario Hockey League’s Central Division.

Even with its early-season struggles, the Battalion, with the OHL’s youngest roster, is only four points behind the Mississauga Steelheads, who have two games in hand, for the eighth and final playoff spot in the Eastern Conference.

North Bay has played the toughest schedule in the league to this point, with 12 games on the road and seven at home. Only two Western Conference road dates are left, against the Kitchener Rangers on Jan. 17 and the Erie Otters on Feb. 29. The Battalion is 2-5-0 at home and 1-11-0 in away dates.

The Battalion lost three close decisions last weekend, 4-3 to the London Knights, 6-4 to the Windsor Spitfires and 4-2 to the Sarnia Sting. The Troops led 2-0 midway in the second period Friday night at London and 4-1 after 40 minutes Saturday night at Windsor. Trailing 2-1 late at Sarnia, they gave up an empty-net goal, saw Mason Primeau score to pull within 3-2 and surrendered a second empty-netter.

“The margin between winning and losing is very small,” noted Dennis.

“For me, the most exciting part about looking at a game and seeing mistakes is they’re fixable mistakes, so there are things we can do to get ourselves over that hump.

“We feel we have a bunch of young guys that are going to take that next step in the OHL, but this is why you play the games. You’ve got to go through the ups and downs to see what you’ve got.”

The Battalion has lost 10 consecutive games twice previously, the first occasion coming in its expansion season, from Jan. 8-29, 1999. The streak was preceded by three games in which Brampton had two ties and a loss, making for a 13-game winless run, a category ended by the advent of the shootout. The second 10-game skid ran from Jan. 27 to Feb. 17, 2002.

The Troops figure to have forward Liam Arnsby back against Hamilton after he missed five games while with Canada White at the World Under-17 Challenge at the Western Hockey League centres of Medicine Hat and Swift Current. Athletic therapist Andrew Sachkiw also was at the eight-team tournament, in which Arnsby’s squad finished fourth.

Left winger David Campbell, who was called up for the weekend trip and played two games, has rejoined the Blind River Beavers of the Northern Ontario Junior Hockey League.

Left winger Arthur Kaliyev paces Hamilton with a league-leading 21 goals and 17 assists for 38 points in 20 games. Jan Jenik has scored 12 goals and added a team-high 21 assists for 33 points, and fellow centre Logan Morrison has seven goals and nine assists for 16 points, both in 17 games.

The Bulldogs have three players from the North Bay area on their roster in Payton Vescio, a North Bay resident, and fellow defenceman Jake Gravelle and goaltender Zachary Roy, both from Callander.

Hamilton, which has lost its last three games, is 8-11-1 for 17 points, fourth in the East Division.