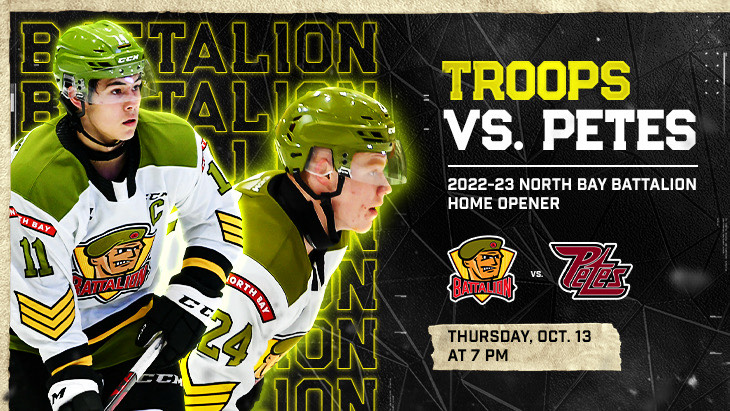 While the OHL season opens with three games on Sept. 29, a Pinty’s Grand Slam of Curling event at Memorial Gardens has the Battalion on the road for its first five games. For the first time in franchise history dating to 1998-99, the Troops’ season will not feature a home game on Thanksgiving Monday.

The home opener is the latest in franchise annals. The Troops’ first home opener at North Bay, after relocation from Brampton, was Oct. 11, 2013, also against Peterborough, after nine road dates. The Petes won that game 2-1.

The 2021-22 OHL season opened Oct. 7, with North Bay playing host to Peterborough in the first of three games to get under way that night after the previous campaign was lost to the coronavirus pandemic. The Battalion won 7-4.

Before last year, the latest season start in franchise history was Sept. 26, 2014, when North Bay lost 5-4 in overtime to the visiting Barrie Colts.

The Battalion is slated to be the last team to play its home opener in the coming season.

The full schedule is to be released Thursday.